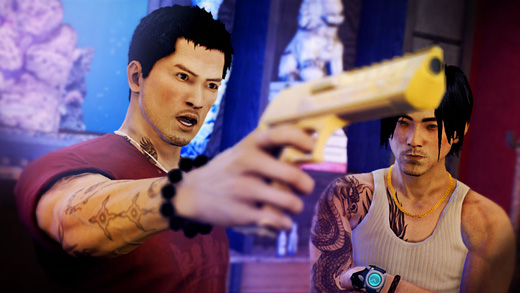 HIGH Dominating the street races with my Velocita.

LOW Flipping a mission-critical van when I was two feet away from the destination.

WTF Why did Activision cancel this game again?

I can't think of a game that's had to go through more to get released than Sleeping Dogs. It began as a new IP called Black Lotus, had its name changed to True Crime: Hong Kong, went through several delays, got canceled by Activision, picked up by Square Enix, and finally given the title it now carries. After going through all of this, Sleeping Dogs

has somehow not ended up as a complete mess of a game. On the contrary, it's one of the best open world games in recent memory.

Although it's got competition in its genre, Sleeping Dogs sets itself apart by taking place in a city that's not New York or Los Angeles. Instead, players are in Hong Kong, which means driving on the left, hearing Cantonese, and eating animals not commonly eaten in western countries. Layers of neon signs with both Chinese and English writing on them plaster the city's buildings, while the small temples and lush gardens serve as a breath of fresh air from the more industrial areas. The city would've benefited from some more open spaces that let the player see across more of the cityscape, though, since it feels very cramped and narrow. Still, developer United Front Games' choice to go with a city not commonly touched by video games has paid off.

Given its location, it's no surprise that Sleeping Dogs focuses on Hong Kong-focused criminal organizations called the Triads. Wei Shen, a Hong Kong native who has spent many years of his life in the United States, returns to work as an undercover cop and infiltrate the Sun On Yee. Needing to maintain the trust of the triads without losing his sanity in the process, Wei is put into scenarios that effectively make the player ask "What would I do in this situation?" This conflict helps Sleeping Dogs' story to be one of the most interesting of the year, but it's not all it could be. The story is very fragmented, never reaching the point where all the pieces feel like they're coming together. Many of the characters that were important in the first half are irrelevant in the second half, causing the plot to miss out on a sense of build-up that really could've propelled it. The story proves its potential in the early hours of the game, making the way it devolves into a series of small-scale gunfights towards the end all the more disappointing. Given the way the story seemed to build up city-wide gang wars with Wei square in the middle of it, the final hour felt surprisingly low-key.

The gameplay in Sleeping Dogs isn't as unique as its story, but it makes up for this with variety and polish. The fighting is fluid and encourages combos, the driving controls excellently, and there's even some Assassin's Creed-style parkour to be found. These elements flow together nicely, and are done better than most games that only focus on one of them. They also all get a jolt of Sleeping Dogs' Hong Kong action movie vibe, particularly in the martial arts' sheer brutality and the aggressiveness of the gunplay, and when driving a car, Wei has the ability to jump onto another moving car and hijack it. Sleeping Dogs has a clear goal of looking cool at all times, and this was a good way to go about achieving that. 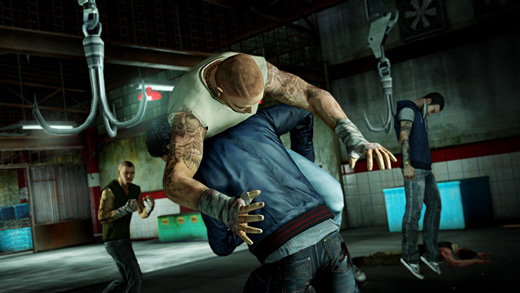 As much as I like the gameplay elements, they're not all that well integrated into the main missions. It makes the common open-world mistake of feeling the need to introduce each unique gameplay element individually, resulting in far too many missions that just feel like tutorials. There are even some missions that feel like they're only in the game to introduce the individual hacking minigames, which aren't nearly complicated enough to warrant that.

The side activities are mostly really good, although there are some bad ones. The best is easily the street races, which effectively utilize both the excellent driving controls and a brutal ramming maneuver to make for some of the best, most destructive races I played in a game this generation. The fight clubs are very simplistic in concept, (They're basically just Wei fighting a ton of guys at once) but that's all they need to be given how addictive the martial arts combat is. On the other hand, the dating minigames are pointless and boring, having Wei take part in a simple task (such as taking pictures or karaoke) for about a minute. They don't flesh out the world or the characters at all, and are only worth doing because it'll make collectibles show up on the map, for some reason. Luckily, since side activities are optional, players can stick to the ones they like and completely ignore the ones they don't. By doing so, I was able to get hours of enjoyment out of Sleeping Dogs without even touching the story missions.

With its crisp, colorful graphics, great score, and fantastic voice acting, Sleeping Dogs is certainly easy on the senses. The actors do a good job of switching between English and Cantonese, and the radio stations have a diverse selection of music. The city is vibrant and detailed, only being hampered by some graphical glitches and robotic NPCs. Driving through Hong Kong while it was raining and listening to the radio's relaxing "Softly" station all made for a particularly peaceful drive, a nice contrast from over-the-top car chases that Wei is usually taking part in. Beyond just the crazy action and engaging story, moments likes this really helped make Sleeping Dogs memorable to me.

Rising from the ashes, Sleeping Dogs

has proven just how wrong Activision was to cancel it 18 months ago. It takes several gameplay styles from many of the best open world games of this generation and gives them a distinct Hong Kong cinema feel. There's no one area where the game truly dominates the competition, instead just being great in several areas. It kept me hooked from beginning to end, and I was still doing side missions long after credits had rolled. This is a good day for Square Enix. Rating: 8.5 out of 10.


Disclosures: This game was obtained via retail and reviewed on Xbox 360. Approximately 33 hours were devoted to the game, and it was completed. There is no multiplayer.

Parents: According to the ESRB, this game contains blood and gore, intense violence, strong language, sexual content, and use of drugs. There's a lot of blood and cussing to be found here, so this is probably not one for the kids.

Deaf & Hard of Hearing: This is a weird one. 95% of the time, Sleeping Dogs is accessible, but there were several times that the phone conversations weren't subtitled. I'm not sure if this is a glitch or an oversight, but I can see it being annoying for those who need them. It doesn't make the game unplayable, though, so I would still say give it a chance. It'll just be a rare annoyance for you.