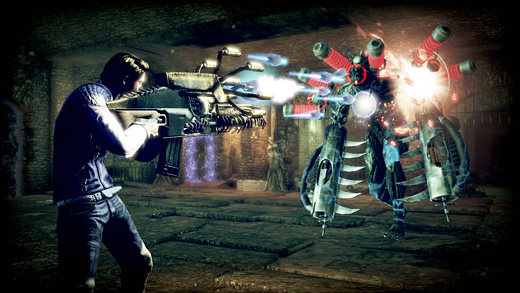 LOW The boring switch puzzles right before the final boss.

WTF If I had to pick one, it'd be the discovery that strawberries are made of ground up tongues. Really, the entire game is a giant WTF.

If Shinji Mikami were to release a game about watching a tree grow, I'd be ready to buy it at launch. In addition to having tight controls and an abundance of new ideas, his games tend to have a great sense of humor. Resident Evil 4 and last year's Vanquish are both in my top ten games of all time, and exude all of those properties extremely well. I could go on about all of Mikami's work, from the stylish side-scroller Viewtiful Joe to the misunderstood gem God Hand, but I'll hold back. Instead, I'll just say what needs to be said: Mikami's brilliant blend of slick, well-balanced gameplay and intentionally cheesy comedy is in full force in Shadows of the Damned

, and it's just as awesome as I'd hoped.

Like all good love stories, Shadows of the Damned begins with a beautiful woman being taken to Hell by a demon. With his girlfriend taken from him, demon-hunter extraordinaire Garcia Hotspur must descend into the depths of the Underworld to bring her back. He's joined by his floating skull companion Johnson, who can transform into several powerful (and phallic) weapons, such as the explosive Hot Boner or the rapid-fire Teether.

Anyone familiar with the gameplay of Resident Evil 4 will feel instantly at home here. Weapon upgrading, limb-specific damage, and special finishing moves on stunned or wounded enemies all show up here, albeit with a little more crazy sprinkled on. What helps separate the control scheme of Shadows of the Damned is the more acrobatic feel of it. Not only can Garcia move and shoot simultaneously, he also has an infinitely useful dodge maneuver similar to the one in Vanquish. This gives the game a much faster pace without sacrificing the flow between set-piece moments that Resident Evil 4 did so perfectly.

Sticking with the Resident Evil 4 comparisons, Shadows of the Damned also has its progression based largely around opening locked gates. I would enter a room, see a sealed door, go down a secondary path, shoot a switch, and then proceed through the unsealed door. Even though this formula sticks around for most of the game, there's enough variety to keep it from being tedious. One of the best examples is a bowling mini-game where Garcia must roll a skull down an alley and have it kill ten demons to progress. It was certainly an unexpected change-up, and I would like to have seen more of it. 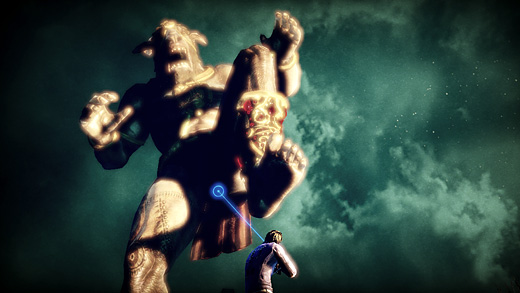 Garcia and Johnson maintain an entertaining back-and-forth banter throughout the game, making them far more likeable than any of the characters in most horror-style games. The humor of the game does detract from much of the fear the game tries to invoke, but at the same time made me actually worry about the well-being of Paula, since I could actually relate to Garcia as a human being. This level of humanity is central to why this game is such a brilliant experience, and I think more serious horror titles could learn from this. If bad things are happening to characters I don't know or care about, there's nothing to put me in their shoes, and the sense of horror is thrown out the window.

The Hell found here is very different from the typical portrayal of Hell. Rather than make everything red, black, or on fire, Hell in Shadows is more of a discolored version of the real world, just with light replaced by shadows and vice versa. There's also quite an emphasis on harsh neon lights and metal, spiky monsters that help enforce the punk rock vibe the game is going for. This is also helped by the game's soundtrack, composed by video game music veteran Akira Yamaoka. (He also worked on the Silent Hill series.) Combined with the general weirdness expected from a Suda 51 game, the vision of Hell found here makes Hell in Dante's Inferno look like the Mushroom Kingdom.

Even when backed by spot-on controls, a cool setting, and a script bursting at the seams with dick jokes, no game is perfect. One issue that became more and more clear as time went on was that the developers seemed to have been running out of ideas toward the end. For example, there's a Geometry Wars-ish sequence halfway through the game where a paper version of Garcia floats through a storybook environment, shooting demons and collecting gems. It's a nice little one-off, but the sequence gets brought back two more times with barely any changes made in a fairly blatant bit of recycling. I understand that people don't want games to end too quickly, but if length is added at the sacrifice of pacing, it's not a good trade-off. I would've preferred the approach of Vanquish or Portal, where the game is short, but leaves the player yearning for more.

There are other gripes that could be made, such as the lack of a New Game Plus mode or the overuse of switch puzzles late in the game. Doing so, however, would be meaningless. Like all great games, the flaws in Shadows of the Damned

washed over me just as life-restoring tequila washed down Garcia's throat. Like most of Mikami's great works, the game has a lot of heart beneath its wacky exterior, something further exemplified by the game's twisted ending. It's an unforgettable journey through Hell that is certainly worth taking. Just remember to bring your Johnson. Rating: 9.0 out of 10.


Disclosures: This game was obtained via retail store and reviewed on the Xbox 360. Approximately 9 hours of play was devoted to single-player modes (completed 1 time).

Parents: According to the ESRB, this game contains blood and gore, intense violence, nudity, sexual themes and strong language. Certainly not a game for children, although the game could be educational when it comes to the origin of strawberries. (But seriously, keep this away from children.)

Deaf & Hard of Hearing: You should be fine. Subtitles are available for pretty much everything, and do a great job of representing nonsensical ramblings of pissed off demons.