There Better be Some Cheese at the End of this Maze 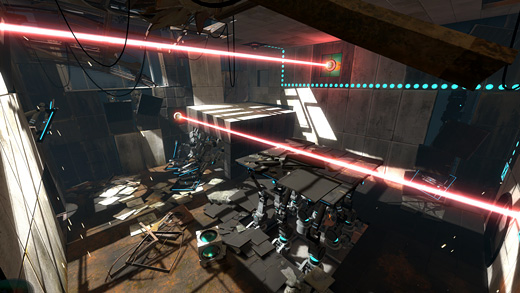 LOW A series of giant test rooms where the challenge stems from spotting the portal-able wall.

WTF How do you "freshen up" carbon dioxide, GLaDOS?

When it comes to the original Portal, its reception goes beyond simply having a fanbase. Portal is a game that people deeply, genuinely love, in a way almost completely exclusive to it. The reasons for this extreme fondness are large in number, but the one at the forefront of my mind is the game's humble origins. It was essentially released as just a bonus for purchasing the Orange Box, with very little in the way of length or budget. What came out of it was much more than the sum of its parts, and a certain level of charm resonated from its simplicity.

Like many surprise hits, the creators sought to capitalize on the devotion of fans. Portal 2

doesn't seek to shatter boundaries or shock the player, and instead is content with being a celebration of the previous entry. While a rise in content is something to be appreciated, it's unfortunate that many of the basic aspects that made the original break out have been dropped into an Aperature Science Emergency Intelligence Incinerator.

The original Portal wasn't just about puzzles. There was also an incremental build-up to the realization of GLaDOS' true intentions. This eventually causes the player to use his/her training to fight back when the time arises, and not simply go by what GLaDOS says. The revelation that the guiding voice of GLaDOS wanted to kill the main character Chell felt like the basis of the entire game. Portal 2, on the other hand, is about Portal 1, in almost every way that it shouldn't be. So much of the game feels in line with the original's formula, it's hard to shake the feeling that Portal 2 only exists as an excessively fleshed out version of the first game.

The first three hours are composed almost entirely of test chambers, a form of progression I found all too familiar and all too boring. With the original game being such a strong jumping-off point for a larger-budget sequel, seeing Portal 2 rehash the same structure for a majority of playtime seems like a waste of creativity. If the game had only brought them back at the end of the game, it would've had a much more positive, reminiscent, full-circle effect. As it stands, I don't think I could stare at another test chamber without losing my lunch.

I'm guessing I'm not alone on that. It actually seemed like the developers were aware of the growing tedium caused by doing test chamber after test chamber, particularly when one of the characters says "Just hang in there for five more chambers!" I basically just interpreted the line as "Sorry we're making you repeat the first game's formula for several hours, but it'll end soon, we promise!" Not soon enough, I'm afraid.

Many of the sequences outside the testing areas fare much better. The absolute best part of the game for me was a puzzle based around sabotaging a turret assembly line. In addition to the lines uttered by the turrets confused by the sabotage's effects making me laugh out loud, the puzzle had an equally funny effect on the story at multiple points later on. It was great to see a puzzle based on more than simply locating the next elevator.

While there are a number of sequences that struck me as being very clever, some parts of the game absolutely crash and burn. If Portal 2 was split into three parts, the middle third of the game is undoubtedly the weakest. Most of it takes place in a foggy underground area filled with large scaffolding and broken catwalks. These massive, misty caves provided area after area where the only thing being tested was my ability to see a speck of wall that could have a portal shot onto it. There's no fun or challenge to be derived from this, so why it occurs so often is an enigma to me.

This search for portal-able surfaces is a prime example of what I like to call "a puzzle that isn't actually a puzzle", something that serves to hold the player up without doing anything substantial. Whether I was taking too long to spot a box on top of a tall pillar or was forced to shoot a wall from an awkward angle, there was always something I wasn't seeing. Events like these are what made me conclude that Portal 2 is less about how the player thinks, and more about where the player looks. The size of the test chambers wasn't a problem in the first game, so making a large chunk of the sequel's testing areas five times larger is a strange decision that doesn't pay off.

On a more positive note, I am in total agreement with Richard's review on the humor in this game—it's fantastic. It could be argued that the humor in Portal 2 isn't really about anything, whereas the humor in the first game was tied directly to expressing GlaDOS's madness. The sequel's humor is really just there to make people laugh. While it does seem more artificial from that perspective, I didn't really care because it was so damn charming. The characters are incredibly strange while still being relatable, and the story does a good job of putting them in funny scenarios to expand on their best traits. The game's ending had me laughing as well, although that was more due to the fact that it made absolutely no sense at all. For all this talk of science, it certainly seemed to go out the window for the finale. I know Portal has never been about realism, but what happens at the end is like something from a cartoon.

serves as a clear example of why short games need to exist. Even with the many new uses for it in the game, the portal gun cannot remain fun for a full eleven hours. Moments of genius are eclipsed by hours of regurgitated content from Portal, and a sense of progression feels lacking. There are escape sequences late in the game based around avoiding a barrage of crushing walls and moving bridges thrust upon the player by the antagonist that have a great amount of excitement tied to them. If Portal 2 had been four or five hours long and composed primarily of events like this, I would've loved it. Instead, Portal 2 feels like an inflated shell of a much better game. The good bits are there, and I'm glad I got to see them. Having to abide the hours of boredom it took to get there? Now that was a test. Rating: 6.5 out of 10.


Disclosures: This game was obtained via rental and reviewed on the Xbox 360. Approximately 12 hours of play was devoted to single-player modes (completed 1 time) and .5 hours of play in multiplayer modes.

Fantastic review. This is what the game is genuinely worth, and represents how I felt about it the first time I played it. Yes, it is a fine game, but it isn’t great. Coincidentally, just last week I played through both the first and second Portal, and yea I still feel the same way. The first Portal feels like a work of art, a proof of concept that games can be more than they’ve been, that you can have a puzzle game that isn’t about the puzzles. Portal 2 feels like a cartoon of those ideas. Glados becomes the scrappy… Read more »