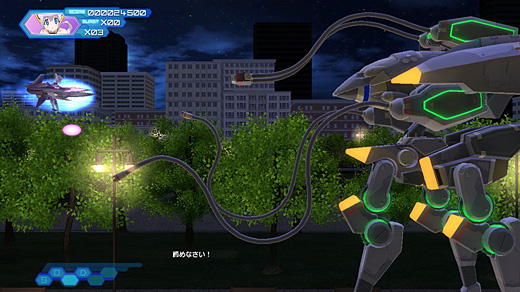 HIGH The music is fairly catchy.

WTF How exactly was this inspired by Gradius?

only made it to North America for one very simple reason: it's incredibly easy to localize. I'm pretty sure the entire game was translated over a lunch break, then vomited onto Western shelves by Konami to pay for somebody's new iPad. I don't want to fault Konami for localizing a game so unlike what non-Japanese gamers are accustomed to, but I do want to eviscerate Otomedius Excellent for being insubstantial, unenjoyable, and stupid.

While shoot 'em ups (or "shmups") are generally cool diversions for jaded gamers looking for some classic twitch gameplay, they've been struggling to stay relevant as full retail games. Much like classic adventure games, the genre is limited by nature and struggles to make good use of new technology. While a game like Deathsmiles partially fills this gap by having interesting setpieces (such as a giant rampaging cow) and at least a partial story, Otomedius Excellent in no way works to defy the stigma that shmups only work as downloadable titles nowadays. It has no story, looks dull, and can be completed in under an hour. How this game tries to justify a forty dollar price tag is far beyond my level of comprehension.

Even as far as shmups go, Otomedius Excellent's gameplay is incredibly unremarkable. The enemies are unimaginative, the power-ups aren't particularly effective, and the controls don't flow as well as expected. The overall design doesn't seem to have any logic behind it, which isn't out of place given the rest of the game.

With the game so thoroughly emphasizing its cute rocket-riding 14-year-old girls, I can't help but wonder if the rest of the game is made completely nonsensical to make that creepiness easier to overlook. Every time I got disturbed by the suggestive nature of the characters, I'd get further sucked into the swirling vortex of dumbness the game exudes to the point that I completely stopped caring. It was a vacuum of nonsense from which no fun could escape. Every enemy, boss, power-up, and line of dialogue is nothing more than one stupid 50-minute blur in my memory, now. It's as if the game feeds off its own ridiculousness to excuse how disturbing it is. In an incredibly idiotic way, it's actually kind of genius.

shouldn't be worth anyone's time. Beyond the overall badness of the gameplay, the whole thing just feels incredibly cynical. Since the only thing needed to localize it was removing the region lock and translating a handful of sentences, I can't shake the feeling that this is nothing more than a quick buck for Konami earned by feeding off starved shmup fans desperate for a new major entry into the genre. Perhaps those people will finish Otomedius Excellent with their shmup thirst quenched, but all it left me with was the incredible urge to play anything else. Rating: 2.0 out of 10.


Disclosures: This game was obtained via publisher and reviewed on the Xbox 360. Approximately one hour was devoted to single-player modes. (completed one time) and 0 hours of play in multiplayer modes.

Parents: According to the ESRB, this game contains mild fantasy violence, partial nudity, and suggestive themes. As creepy as this game is, I don't think there's anything in it would be damaging to a child. While the suggestive themes are certainly present, it never really goes beyond that. A young person playing this game seems innocent enough to me, although truth be told passing on the game altogether sounds like the best idea.

Deaf & Hard of Hearing: Since the dialogue is all in Japanese and there's little in the way of audio cues, deaf gamers should be in about the same position as non-deaf gamers. As a whole, it should be pretty approachable.

This game is terrible. But I did appreciate the Gradius/Salamander tributes. It just makes me wish we had a real Gradius game on current-gen consoles.

…on the other hand, it probably wouldn’t be as good as either Gradius V or Gradius Gaiden.