The Return of the Ripper 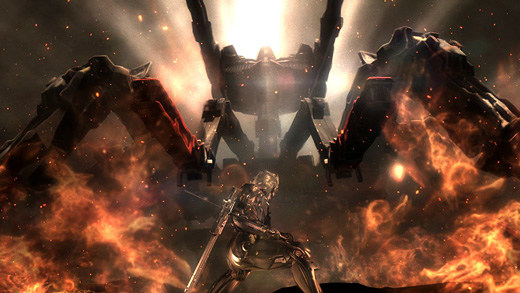 HIGH A spectacular boss battle with a sai-wielding man made out of magnets.

LOW Finding out who the final boss is.

WTF I normally don't like heavy metal music, so why do I like this soundtrack so much?

is a once-cancelled game that used to go by a different title. Originally called Metal Gear Solid: Rising when it was revealed in 2009 as a game from Kojima Productions, the title stalled when its signature "cut everything into pieces" mechanic ended up breaking the level design. After a quiet cancellation, Hideo Kojima began the search for another Japanese developer that could handle the remnants of his company's debacle and salvage a good game out of it.

This task fell upon Platinum Games, creators of my favorite shooter of all time, Vanquish, and the excellent Bayonetta. Since Platinum is arguably the most acclaimed new Japanese developer of this generation, this choice made perfect sense, and got me even more excited about Revengeance than the fact that it had Metal Gear in the title. That said, such an odd development cycle had me nervous, and I feared it would leave the game damaged. As it turns out, Platinum's genius was able to shine through these troublesome circumstances, but the effects of Revengeance's hasty assembly becomes more and more obvious as it goes on.

Anyone unfortunate enough to get through Metal Gear Solid 4: Guns of the Patriots will remember the cut-scenes showcasing cyborg ninja Raiden, since apparently all the money that could've gone into hiring editors to un-bloat the story went into rendering instead. Many immediately wondered what a game based on this new Raiden would be like. Platinum delvers by combining fast and challenging hack-and-slashing with the unique "Blade Mode"—a mode that lets players cut enemies to pieces like no other game has before.

Fluid, difficult, and satisfying combat is what I look for in a hack-and-slash game, so that alone was enough to make me appreciate Revengeance. As opposed to most games in this genre, each slash of Raiden's sword isn't just working to reduce an enemy's invisible health bar. Instead, his attacks are constantly working to build up energy for Blade Mode, bringing about another round of cyborg-chopping.

This system rewards players who play aggressively, but the game still punishes those who play stupidly. As a result, players are encouraged to utilize Raiden's speed and strength to go in fast to tear up foes, but still play defensively and evasively when they start hitting back. Not letting players get away with brainlessly slashing all the time is a mark of genre mastery, and Revengeance pulls it off beautifully. As more abilities and weapons are unlocked and new enemies are introduced, the combat only gets better. 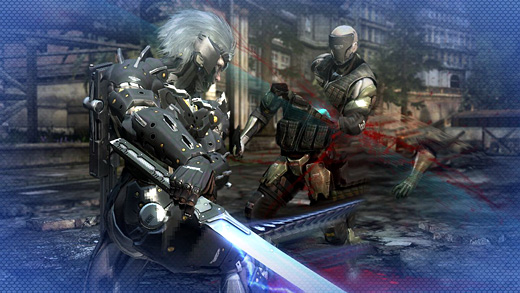 The light stealth elements also work well, challenging the player get through rooms without being detected while never forcing them to do so. Hiding in cardboard boxes or oil drums and dropping down from rafters to instantly kill powerful enemies is a satisfying alternative for those who want to give their thumbs a break from the furious swordplay.

Looking beyond these things, however, is when the rushed development becomes apparent.

For starters, Platinum's stories have always been an odd thing. They're never good, but they always suit their respective games well enough. This level of quality was serviceable since they've only been working with their own IPs, but that status quo has to change when dealing with a Metal Gear game.

For instance, the Metal Gear Solid games are known for having iconic and memorable villains. This is an area where Platinum has been weak in all of their projects, and the trend continues in Revengeance. The fights with the villains are great, but the antagonists don't succeed at evoking emotion, and never make the player question whether or not killing them is the right thing to do. Some may argue Revengeance's villains shouldn't be judged based on previous Metal Gears, but given the series's status as having some of the best baddies in video game history, it was hard to let them off the hook.

Digging deeper, it's easiest to see other issues arise past the halfway mark. Later chapters are shockingly short when compared to earlier ones. I'm fine with short games, (just look at Vanquish) but only if the work still feels complete. Platinum has developed a reputation of having a wide array of creative weapons, so Revengeance having only four uncreative (though still entertaining) weapons could also speak to the title not being fully realized. Finally, the later chapters of the adventure start flying by, giving the feeling that entire levels had to be removed from the game, or at least massively streamlined. This streamlining might also explain why the ultimate boss comes out of absolutely nowhere, and makes the final cut-scenes of the game much more laughable than they're intended to be.

Thanks to Platinum, Revengeance was rescued from its dire fate and offers imaginative gameplay that doesn't pander to the increasingly soft gamers of today. At the same time, this last-ditch save leaves the game too visibly trimmed and awkwardly connected, and ends with a final act that seems to be sprinting past characters and plot points to get to the end.

If a sequel is made with a more consistent vision and a better development schedule, I wouldn't be surprised if it ended up being one of the best hack-and-slash games ever made. Until then, Metal Gear Rising: Revengeance

will simply stand as a "very good" action game that survived cancellation through the hard work of an incredible developer. Rating: 7.5 out of 10.


Disclosures: This game was obtained via retail for the Xbox 360. Approximately 12 hours were put into the game, both the single-player (completed once) and some of the additional VR missions. There is no multiplayer.

Parents: According to the ESRB, this game contains blood and gore, intense violence, and strong language. As this suggests, the game isn't for children. Blood and graphic language are common throughout, with multiple instances of each including cybernetic spines being ripped from enemy bodies, frequently cutting opponents into tiny bits, and a young boy who spouts frequent profanities.

Deaf & Hard of Hearing: All important dialogue is subtitled, and there are no crucial sound cues during gameplay. Also, use of the in-game radar system helps highlight potential foes visually. You shouldn't have a problem.