Your Daughter is in Another Castle 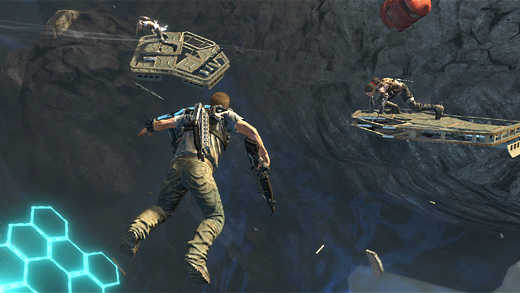 HIGH Flinging an enemy high into the air and watching the varying gravity directions pull him back and forth.

LOW Pretty much every single line of dialogue. Or the boss fights. I can't pick between the two.

WTF Look man, I know you love your daughter, but do you really not lose sight of that while the world is getting taken over by aliens?

When it comes to cover-based third-person shooters, comparisons to Gears of War are going to happen. The game practically invented the sub-genre, after all. The problem with making comparisons is that they don't indicate a game's actual quality. Binary Domain may take a lot of inspiration from Gears of War, but it still does enough with its story and gameplay to be an excellent title in its own right. Meanwhile, many other Gears-like titles fail to do this, delivering nothing compelling. These end up being forgettable, gimmick-based versions of the game they're borrowing from. Case in point, Inversion.

Right off the bat, Inversion makes it clear that it has no interest in making its characters likable. Davis (a police officer) and his partner are driving somewhere, have uninteresting archetypal dude-bro banter, and end up going straight into an alien invasion. Davis' wife is killed, which causes him to grimace for all of five seconds before getting over it and returning to his original self, beginning his passionless journey to save the shameless plot device, his daughter. I can forgive a bad story if it's not the game's focus, but the one in Inversion seems to be actively trying to annoy the player.

Inversion's attempt to stand out comes in the form of gravity altering mechanics. The player can induce lower gravity to make enemies and objects float, while higher gravity can crush enemies. I like having ways to deal with enemies other than just going for headshots, but the gravity options don't offer much variety. They do as they're intended, and nothing more.

By the halfway point, I couldn't have been more bored of blasting the mindless drones with the dull arsenal the game provides. The shooting in Inversion lacks the feedback found in Binary Domain, the agility found in Vanquish, and the style found in Max Payne 3. Simply put, gunplay here is functional but uninteresting, and should've incorporated more gravity mechanics into the guns themselves rather than keeping them separate.

There are also attempts at having setpiece moments in the form of low gravity areas that let Davis levitate from one floating object to another. Much like the gravity powers, these sections don't really allow the player to mix it up, simply having Davis move from one piece of debris to the next. The firefights that break out in these sections are awkward, but at least they mix up the gameplay, if only a little.

The areas I've mentioned are unimaginative, but functional. However, if there's one aspect of Inversion that falls completely flat on its face, it's the boss fights.

From the nonsensical invincibility frames to the stock enemy waves that come in to artificially lengthen them, the boss encounters do everything a boss fight shouldn't. To top it off, the worst of these fights, the one with the "slave driver", has to be done four times throughout the game. The fight plays out the same way each time, the only difference being how much health the slave driver has. The fourth fight was one of the most difficult parts of the game simply because of how much health it had, making it a war of attrition more than anything. On the flipside, the final battle is pathetically easy, devolving into the same wave system as all of the other bosses but without any of the challenge.

It's been about a week since I finished Inversion, and I've already forgotten most of what happened in it. There were two plot twists that were mildly interesting and a couple of cool uses of the gravity powers, but as a whole the game is strangely lifeless.  Most of the time, Inversion was boring me, and when it wasn't doing that, it was frustrating me. Comparisons to Gears of War would be irrelevant; with such a lack of inspiration, Inversion would've turned out mediocre no matter what it was ripping off. Rating: 4.0 out of 10.


Disclosures: This game was obtained via publisher and reviewed on the Xbox 360. Approximately nine hours were put into the game and it as completed. No time was put into the multiplayer.

Parents: According to the ESRB, this game contains blood and gore, intense violence, strong language and suggestive themes. The first three descriptors are appropriate, but I have no idea what "suggestive themes" they're referencing. There's much violence and cussing to be found here, so I don't recommend it for kids.

Deaf and Hard of Hearing: Subtitles are available, and do their job. There are no sound-dependent cues that I can recall. You should be fine.