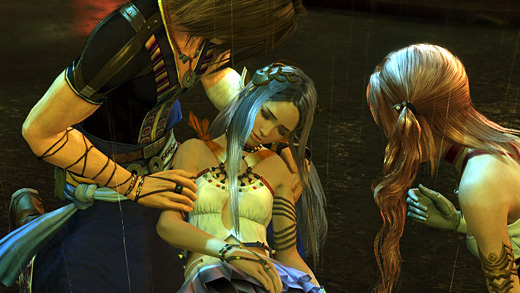 At this point, there's nothing I can say about Final Fantasy XIII that hasn't already been discussed at length by players far more knowledgeable about the series than I am. For me, it was linear, lifeless, and had a ridiculous story told with unlikeable characters. In fact, the game was awful to the point that I couldn't even finish it, which was a special insult considering the number of bad role-playing games I've been able to suffer through. (I'm looking at you, Dragon Age II) Above all else, the game showed that the way to save the Japanese role-playing game (JRPG) wasn't to suck out most of its content, leaving a crumpled shell in its place.

The biggest step taken by Square Enix to overcome the mistakes of FFXIII was to go back to the tried and true format of past titles in the franchise. For example, towns offering sidequests (a hallmark of the genre) return virtually unchanged, complete with people incapable of solving their own problems. I went through the entire game without doing a single one of these help-outs since I'm generally a critical path player, but although this template may be uninspired, it's at the very least reliable. The shift also makes Final Fantasy XIII-2

After this return to more traditional design, the biggest risk taken by FFXIII-2 was basing the game around time travel, one of science fiction's most infamously convoluted plot devices. This sequel explains that things called "time gates" are constantly being used by formerly-crystalized Serah and newcomer Noel in order to find Lightning, protagonist of the first game. Due to a series of paradoxes, everyone in the world believes Lightning died at the end of the FFXIII. Noel travels back through time to tell Serah her sister is still alive in Valhalla, a place where time does not exist. Together, they set out on a quest to find her.

This seems like a plotline that would be incredibly easy to screw up, but the series seems to have learned from its missteps by keeping the lore and exposition to a minimum, and the adventurous feel to a maximum. Moving at a brisk pace and told through the eyes of characters that are actually likeable, FFXIII-2's story was able to make me overlook the many lapses in logic to see an exciting tale that sucked me in far more than its predecessor ever did.

The good times keep rolling when combat starts. The battle system will be instantly recognizable to players of the first game, but changes have been made where they were needed most. Like FFXIII, there's an auto-attack feature that automatically picks the best action for the leader character to use at that time. Unsurpisingly, this is incredibly useful and almost exclusively what I used due to the fast pace the battles demand. Unlike FFXIII, however, the player can actually switch who the leader character is, rather than being stuck with the same person in the lead position. This allows for one character to die without getting an instant game over, one of the things I hated most about FFXIII's battle system. 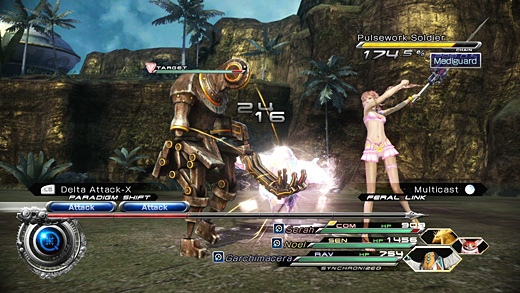 Paradigms (the momentary class-switching system from the previous game) are still around, but this time any character can be any class from the early stages onwards. The combat system is also improved by the Pokémon-style creature collection feature, allowing for a third paradigm (which is dependent on the monster type) to fit into battle formations. They attack just as Serah and Noel do, but can also pull off a quick time event-based super attack after they've battled long enough.

These shifts all serve to make battles fast and fun, although I'm still not sold on the auto-attack option. It certainly helps keep up the fast pace of the fights, but I couldn't shake the feeling that it served to keep the battles looking cool at the expense of depth. It's a tough balance that FFXIII-2 never quite perfects, but there's still enough demanded of the player to keep battles from getting boring. Despite these improved elements, I did have several misgivings not related to combat.

Frequently, I found myself not knowing where to go next, with objective indicators being mysteriously absent. One time, for instance, I was told to go to several time periods I'd visited earlier and find invisible rocks called graviton cores. Exactly where these things were located was left completely unclear, and I eventually had to resort to a FAQ. There were several other times where I felt lost, which was a disservice to the gorgeous locales—constantly wandering around without a clue where to go sucks the majesty and wonder out of them.

I also had several issues with the characters. While Serah and Noel were both interesting, the people surrounding them were hit or miss. Returning face Hope's staggering lack of personality keeps him from being easy to empathize with, as does the fact that he fights with an electric boomerang. Snow is better personality-wise, but his romance with Serah feels forced and poorly handled. The main antagonist Caius is the worst of them, having stupid motivations for his actions that don't make him feel like a convincing villain. These characters do benefit from FFXIII-2's strong animations and voice acting, but not enough to keep them from wearing on me.

My biggest gripe has to do with the ending. Just when a happy outcome seems ready to wrap up the adventure, the game pulls a plot point out of nowhere to give the finale a dark tone. I'm not opposed to dark endings as a whole, but if it's only dark to set up a blatant cliffhanger (complete with the words "To Be Continued…) then the twist isn't justified. The story as a whole is lacking impactful moments, so for the first major one to come right before such a desperate beg for a third game ends FFXIII-2 on a bitter note.

is an exercise in making the best out of a bad situation. Feedback was taken from the previous game, and corrections requested by the players dissatisfied with FFXIII are mostly for the best, but it suffers from being the middle child in what will (now) obviously be a trilogy. Old characters feel pointlessly shoehorned into the plot, and nothing feels accomplished at the end of the game. Fortunately for FFXIII-2, overcoming these issues isn't impossible given how enjoyable the rest of it can be. Rating: 7.0 out of 10.


Disclosures: This game was obtained via rental and reviewed on the Xbox 360. Approximately 21 hours of play was devoted to single-player modes (completed 1 time). There are no multiplayer modes.

Parents: According to the ESRB, this game contains drug references, simulated gambling, violence, mild language and mild suggestive themes. Personally, I think this is a game a child would be fine playing. The violence never feels senseless, and none of the other factors feel too child unfriendly. I can see younger players being bothered by the dark tone of the ending, though, so be warned.

Deaf & Hard of Hearing: Subtitles should serve to allow you to play without concern. Some of the more intense battles may be difficult to keep track of with visuals alone, though. Otherwise, it shouldn't be an issue.

I was all “ok, yeah, I can see how that can be a problem” until I read the bit about the Graviton cores and the complete lack of direction to the game. Complete and utter falseness. The game has a datalog system and a fragment system that once you get the quest forthe fragments, the datalog is updated with that quest. All you had to do was go to the Fragment log, find the fragment you are supposedly hunting and there is a picture of some location. This practically tells you where the Fragment is. You just have to track… Read more »

I found the story messy and contrived and it seemed to get more so the further along I got. The ending came out of nowhere and so far the dlc has been really poor and just as contrived. I didn’t mind Serah as a lead character but Noel was meh! I would have preferred more characters to rotate into my party rather than being forced to use just those two. I don’t understand why they sidelined and/or ignored two strong characters like Lightning and Fang in favour of Noel and a bunch of monsters!