Everything is Chrome in the Future 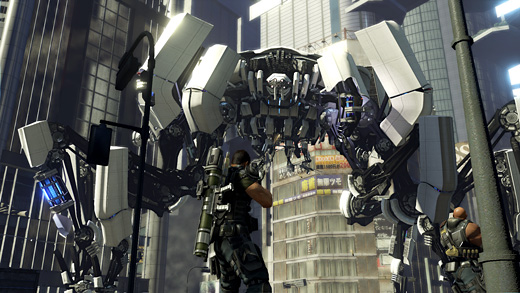 LOW Shooting a robot off of a squadmate without hitting her. It took me more tries than I'd care to admit.

WTF The game feels borderline anti-Japanese, which is strange considering it's a Japanese game.

In 2010, Sega published what has become my favorite third-person shooter ever, Vanquish. It defied the slow, "realism"-based gunplay of more popular shooter franchises by being fast, acrobatic, and completely over-the-top. The game managed to build a strong following despite getting very little in the way of advertising, which could be why Sega is trying their hand again with another robot-filled, fast-paced futuristic shooter: Binary Domain

. It was a wise choice. While it doesn't reach the incredibly high bar that Vanquish set, Binary Domain has all the makings of a treasured cult classic.

Set in the year 2080, global warming has caused major damage to many cities around the world, particularly Tokyo. To overcome the damage of severe flooding, a new "upper city" is built over the slum ruins of the old. Robots are made to assist in the construction, with the requirement that they must be distinguishable from humans for reasons that aren't delved into until the end. When this rule is broken, a group of soldiers from several different countries (known as the "Rust Crew") are sent in covertly to rectify the situation and blast through hundreds of robots in the process.

Considering the team that developed the Yakuza games is behind Binary Domain, it's no surprise that the futuristic Tokyo setting is one of game's best features. I can't speak for how realistic the city looks in relation to modern Tokyo, but it certainly succeeds in feeling completely different from the usual New York-esque locales of many other games. Several things account for the environment's believability, from the signs all being written in Japanese to the prevalence of trains, a staple of Japanese transportation. The dynamic between the pristine upper city and the slums of the old Tokyo ensures that the settings never feel too recycled.

In addition to keeping the look of the city from getting stale, the upper/lower city differences also help vary the gameplay. Since the game starts in the flooded slums of old Tokyo, it's not surprising to see water-based setpieces and things such as jet skis and waterslides. As the Rust Crew moves up to the more extravagant upper city, the gameplay changes its focus to include more civilized forms of transportation, mainly with car chases and subway train shootouts. This diversity really gives the sense that Yakuza Studio used every aspect of the city to its fullest.

Of course, a game about shooting can't be great through world design alone. Good gun mechanics are vital, and Binary Domain sports some of the best in the genre. The aiming feels incredibly precise, and the player's mobility feels smooth and responsive. I never thought I'd care about the amount of detail put into a targeting reticle, but the ones in Binary Domain give a good idea of the range a weapon can be effective in, the trajectory and splash damage explosive weapons will cause, and provide a believable sense of recoil. Even with the guns themselves being a typical shooter arsenal, the controls alone are enough to make them feel fresh. 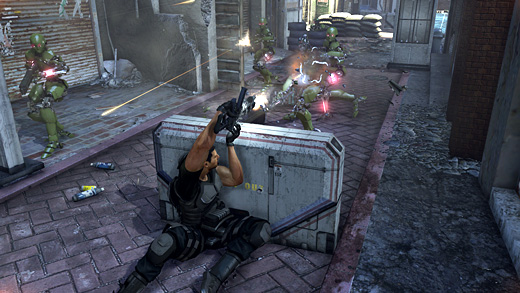 Good aim is especially important in Binary Domain due to the way the procedural damage system works. Rather than having bullet-sponge enemies that aren't affected by the player's shots until they run out of health, the robots here react to where they get shot, and change their tactics accordingly. If a robot's leg is blown off, it will try crawling over to the player and attempt a kamikaze. If a robot loses the arm(s) it was holding its gun with, it'll rush the player and try to kick it. Best of all, a robot whose head gets shot off won't be able to distinguish between friend and foe, and will begin attacking other robots. The way the robots shred apart when under fire gives a great sense of feedback, and a nice contrast from enemies found in most other games.

I've been very positive about Binary Domain's gameplay, but there are complaints to be had here. For example, my earlier comparison to Vanquish is fitting due to the emphasis on robots and fantastic controls, but if there's one thing it lacks, it's that certain X-factor (like Vanquish's rocket sliding and speed) that makes it feel like something the player has never before experienced. Binary Domain is very polished and slick, but moments of boredom still pop up due to the game recycling its own gameplay. There isn't quite enough versatility to keep the gunning fresh like there is in Vanquish, leading to several enemy encounters that felt like going through the motions. There's enough variations in environments, boss fights, and setpiece action to keep the game hot for most of the playthrough, but a few more gameplay risks could've quelled some of the duller moments.

Additionally, shooters aren't known for their stories, but Binary Domain stumbles a bit with its attempt to bridge the gap between gameplay and narrative with its "Consequence System."

Each possible squadmate has a trust meter that indicates how much he/she trusts the main character Dan. This bar goes up and down depending on combat performance, appropriateness of comments, and how often friendly fire occurs. During gameplay, the trust system affects how quickly they come to revive Dan after he's been seriously wounded, and how likely they are to follow orders. The system is also said to change whether or not certain cut-scenes happen, although I can only think of one instance where this seemed to occur.

Consequence System aside, the story manages to be both cheesy and gripping. On one hand, Dan's one-liners and goofy rapport with other Rust Crew members succeeded at getting more than the occasional chuckle out of me. On the other hand, the darker events provided moments of genuine fear for the well-being of the characters I had gotten to know. The plot isn't as predictable as I expected, and has a conclusion that feels rewarding for those who reach it. As a whole, I didn't find the Consequence System particularly impactful, but I was impressed that Binary Domain was still able to make me care about some of the characters—a feat that's usually exclusive to role-playing games.

is a jolt of energy that the shooter genre has needed for some time now. The varied and beautiful environments are a slap in the face to brown, repetitive corridors, and the control of both shooting and moving gives stop-and-pop a run for its money. Combined with a creative and engaging storyline, no aspect of the game feels lacking. If a few additions had been made to the gameplay to prevent some of the repetition that sets in now and then, Binary Domain could've stood alongside Vanquish as the pinnacle of what the shooter genre can accomplish. Rating: 8.5 out of 10.


Disclosures: This game was obtained via retail store and reviewed on the Xbox 360. Approximately 11 hours of play was devoted to single-player modes (completed 1 time) and 30 minutes of play in multiplayer modes.

Parents: According to the ESRB, this game contains blood and gore, intense violence, strong language, and suggestive themes. I don't recommend this game for kids. There's a lot of blood and cursing to found here.

Deaf & Hard of Hearing: Everything is subtitled, and there are no major sound cues that I can recall. You should be fine.

Good review – in that it agrees with my own opinion on the game 😉 I’ve seen Binary Domain reviewed as being a mediocre cover shooter elsewhere, and I can’t really argue that the characters, mechanics and story can be interpreted as uninspired and nothing new. What elevates it for me is that those mechanics have been so well implemented that you’re free to get on with the game, and the robot-shooting is so enjoyable that the sheer amount of ‘fun factor’ is through the roof. That changes a lot – for example it changes ‘cheesy’ in a pejorative sense… Read more »

[quote=Justin]I found the struggle between the authoritarian, isolationist government and the the rebels.[/quote]

I found the the struggle between the authoritarian, isolationist government and the rebels interesting.

Vanquish is also my favourite 3rd person shooter and have a blast with Binary Domain as well. I agree with the x-factor Vanquish has is missing in terms of pure mechanics, but BD is pretty solid overall and I rarely had enemies that felt so satisfying to tear apart limb by limb. I love the voice commands, too bad my accent seems to make it problematic for the game to understand what I say. But when the voice commands work they really add something to the game. I’m now puzzled why not more tactical shooters use voice commands. When it… Read more »

I really appreciated how the developers treated their own country. I found the struggle between the authoritarian, isolationist government and the the rebels. Though I would of liked to have seen that conflict fleshed out a bit more. I also enjoyed the twist at the end with the last boss, predictable though it was.