Our Song to the People 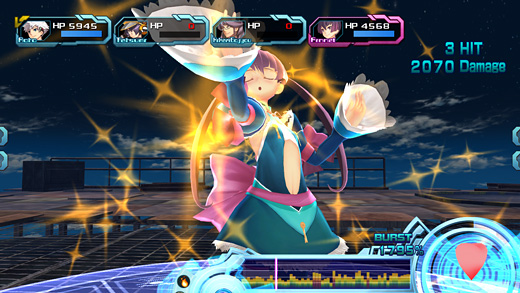 HIGH The string of excellent plot twists around the halfway point.

LOW Not figuring out how to use supermoves until I was forty hours in.

WTF "Of" is the only part of the title I understand.

Japanese role-playing games (JRPGs) have hit a rough patch in recent years, and it's understandable why. They've been largely refusing to move away from outdated game mechanisms such as far-apart save points and static presentation. While these things certainly annoy me, my love of Japanese animation has made the JRPG drought rather depressing—hence my decision to give Ar tonelico Qoga: Knell of Ar Ciel

a try. While I enjoyed the game initially, I figured this was only due to the refreshing aura surrounding anything that wasn't the predictable action schlock I always seem to end up playing. As I continued on, I discovered something much more wonderful about the game: it's fantastic in its own right.

Now, I haven't played any of the other games in the series, so it should surprise no one that I didn't understand a whole lot of the lore. From what I could gather, there are girls throughout the world of Ar Ciel called Reyvateils that communicate with the planet through song and clothing removal. One particular Reyvateil named Saki is being chased by the Clustanian army for some reason, and it's up to a steeplejack named Aoto to protect her.

While a story being difficult to understand may sound like a bad thing, it really isn't. The game fully knows that focusing on its characters is for the best because they're as enjoyable a group as can be found in any non-Lost Odyssey JRPG this generation. The typical anime character types are here, including the energetic farm boy, the innocent apologetic girl, the disinterested emo boy, and the hot-headed tomboy. This might bother some people, but the characters are so shamelessly anime, I couldn't help but warm to them. Even without a strong story, the themes of heroism, humor, overcoming one's fears, and the lighter side of romance are all communicated well thanks in large part to a fantastic localization by NIS America.

To further explore what the characters are like, Ar Tonelico Qoga has a unique and clever way of exploring the Reyvateils' psyche. All of the major towns in the game have something called a dive shop that allows Aoto to "dive" into the mind of one of the girls. While in her mind, the player engages in several strange scenarios to help her overcome her inner demons. It plays out with a very simple board game style of moving from one area to the next. There's no combat here, only going to places and watching cut-scenes. Diving is almost always optional, so it's something that the player can tackle at his/her own pace. It's rare to see a JRPG offer optional content that actually has some weight to it, so diving is certainly a welcome feature. 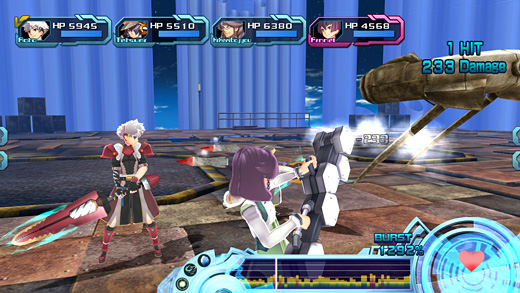 The amount of time invested in making the game funny is key to what makes Ar Tonelico Qoga so enjoyable. Even when it enters into dark backstory territory, the speed in which it returns to strange Japanese humor kept me from getting bored. Some of the highlights include a scene where the group pretends to be brainwashed, or the quirky song that plays whenever Saki wears her cat helmet.

It's hard to judge how the game presents itself. On one hand, most conversations are delivered with static anime portraits, many of them without voice acting. On the other hand, the game has some of the most appropriately eccentric voice acting and catchy music I've ever heard. The 3D environments look unpolished, but the art of the 2D cities looks fantastic. There are also a few anime cut-scenes that look sharp, although I wish there was more of them. The portraits themselves look great, and there's enough of them to convey the characters' emotions. Overall, the presentation is simple, but charming.

Much like NIS America's 2010 title Sakura Wars: So Long, My Love, Ar Tonelico Qoga isn't really about combat. It's certainly there, but it's incredibly simplistic and never very challenging. The game knows this, and therefore puts most of its focus on the storytelling. The combat system plays in real time, with very little delay between actions. The tempo of the song being played is represented on a scrolling grid, and lining up attacks with peaks in tempo will improve the power of the singing Reyvateil. This allows her to unleash powerful, ridiculous attacks, such and dropping a giant syringe on the enemies.

I'm sure it's clear by now that I really like this game, but it's far from perfect. The game would benefit from having more voice acting, since there's quite a few conversations that are all text. Considering how much dialogue a game like Grand Theft Auto IV has, or even other NIS America games have, lacking voice acting for so many scenes is quickly becoming inexcusable. I'd still say that over half of the scenes do have voice acting, however, so this is by no means an all-text game.

The other major complaint I have is the number of reused environments in the last quarter of the adventure. Fulfilling the requirements to unlock the game's "true ending" opens up a lot more of the story and around fifteen more hours of gameplay. Unfortunately, these fifteen hours consist mostly of going back to past environments several times. There are still new conversations and story elements to experience, but I don't think I could bear to run through Clustania's Executive District for another second. Despite this, going for the "true ending" is absolutely worth it to see the characters' entire tale.

2011 has been a year full of surprises for me, but all those pale in comparison to the immense joy Ar tonelico Qoga: Knell of Ar Ciel

brought me. The game is so unabashedly anime, I couldn't help but adore it. There's always more to learn of the characters in all sorts of ways, and underneath the goofiness, there was still a thick layer of strong narrative and character development that kept me invested through sixty hours. I don't know if JRPGs will ever return to their previous prominence, but if Ar Tonelico Qoga is any indication, they still have a lot to offer. Rating: 8.5 out of 10.


Disclosures: This game was purchased from retail and played on the PS3. Approximately 59 hours of play were put into the story mode, and the game was completed. There are no multiplayer modes.

Parents: According to the ESRB, this game contains fantasy violence, language, partial nudity, and sexual themes. This is a tricky one. There's certainly suggestive themes, but the game never comes close to even Mass Effect 1 levels of sexual content, let alone something like GTA: San Andreas or The Witcher 2. The most the girls ever strip to is their underwear. There's also a scene where a girl gets a crystal removed from inside of her that's accompanied by several suggestive groans, although nothing is actually shown. Personally, I don't see how this got an M rating and Record of Agarest War didn't. I think a Teen rating would've made more sense. In fact, that rating in European countries is only PEGI: 12+, for people 12 and up. I guess it just comes down to how much offense you take to implied sexual content and revealing clothing/girls in their underwear. Personally, I found it was handled in a way that didn't make me feel like the girls were really be exploited or taken advantage of, but I can see why some parents would take offense. There's a fair amount of strong language as well, but nothing too extreme.

Deaf & Hard of Hearing: As with most JRPGs, text dialogue is pretty much a constant. The only time it isn't present is during the anime cut-scenes, but those are very uncommon and never particularly important. The only other issue is the warning noise that's made during battle when your Reyvateil is being attacked. You can also tell it's happening when the Reyvateil's health is going down, but that can be pretty hard to notice. These are only minor points for 60 hour game, so I think you should be fine.

Are you referring to Tales of Xillia? It looks incredible, and I’m hoping Namco Bandai brings it to the U.S. and Europe.

Nice writeup! Found this myself on sale for $15 last month while in Europe but have yet to give it a spin.
Keep an eye out for Tales of Exilia – have only played a bit of it so far but its FULLY voiced and by far the best looking cell shaded RPG I’ve ever seen.