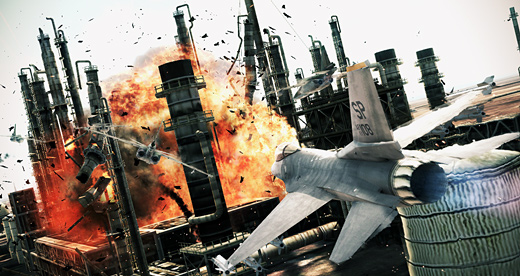 HIGH The greatest quick time event of 2011. It's fantastic. There's no better way to end a game.

WTF Jets with regenerating health? What?

Entering a long-running series without having played the previous entries is always a risk. Many of the issues that I might have with the most recent game could very well be what fans love about the entire franchise. Ace Combat: Assault Horizon

is my first time playing an Ace Combat, and I think I left the game with an understanding of why fans like the series so much. That being said, as a newcomer, I also came away with a fair share of complaints.

Surprisingly, Ace Combat: Assault Horizon defies the typical military story steeped in political tensions and jargon, and instead has some actual humanity in the form of its characters. While they're not particularly well-written or unique, the pilots have enough personality to at least provide some amount of excitement when one of them is put at risk. The plot itself is little more than a battle against Russians, so putting emphasis on the characters was smart. It could've been done to a greater extent though, since the character bits are spaced too far apart and feel rushed.

Considering it's a game about aerial combat, absolutely nobody should be surprised that gameplay is the main attraction. Jets, helicopters, and other type of aircraft that I don't know the name of offer their own take on shooting at specks from a mile away. Predictably, the jets are the most enjoyable, but I'd be selling the game short if I dismissed the impressive amount of variety on display.

The helicopter missions are probably the most flawed of the bunch. There's only two of them, but they drag on far longer than they should. It's a shame, because they're actually well-designed, and hovering between tall buildings is a nice change of pace from the fast and blurry action of the jet fighting. Still, their overlong length and the weakest contribution to the story left the helicopter missions firmly positioned as the red-headed stepchild of the title.

Flying the jets is generally a much better experience. Thanks to the excellent tutorial, the daunting task of controlling one of the fastest vehicles ever made is surprisingly simple. The thrill expected from dogfights is well intact, and is only hurt when the game tries to fix what isn't broken with poorly designed diversions. The best example of this would be the bombing runs, which are hampered by how finicky they are to activate. If my jet wasn't lined up perfectly with the on-screen marker, all the "joy" that comes from circling around and trying to line it up again would ensue.

Little time-wasting moments like this are exacerbated by Ace Combat: Assault Horizon

being overly dependent on time limits. Considering it's mostly about jet versus jet combat, getting shot down should've been my biggest cause of failure. Instead, a majority of my retries were due to not doing something fast enough. Now I'm not against games having time limits, but in a game centering on intense dogfights, the clock shouldn't be my biggest threat.

Despite flaws in its execution, it's clear why Ace Combat is the de facto dogfight franchise. Even as a genre I'm not very familiar with, I had little trouble falling in line with every supersonic nuance to be found. It's not a great game by any means, but there are much worse ways to spend an afternoon than making jets explode. Rating: 6.5 out of 10.


Disclosures: This game was obtained via publisher and reviewed for the Xbox 360. Approximately eight hours were put into the singleplayer and the game was completed. No time was put into the multiplayer.

Parents: According to the ESRB, this game contains alcohol reference, blood, language, mild suggestive themes and violence. The only one of these I remember being particularly profound is the language. Even then, the language isn't strong to the point of requiring a "strong language" disclaimer from the ESRB. Other than that, there's nothing to worry about.

Deaf & Hard of Hearing: Subtitles are present during both cut-scenes and gameplay. Instructions and warnings are clearly displayed on the screen.

I’m glad to read a reviewer point out the quality of the characters in this game. I haven’t played this one yet, but the characters and the radio chatter are what kept the excellent Ace Combat 4 and Ace Combat 5 as entertaining as they were, and they really helped provide motivation in following the story. Most reviews seem to skip right past all story and character elements in order to say “oh its a plane game so you dogfight,” but really, for fans of the series like me, the character interactions are certainly a part the game I look… Read more »