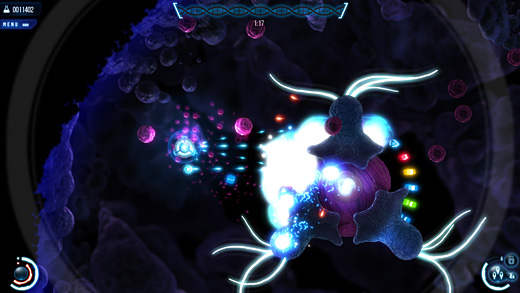 HIGH Upgrade trees with some fun choices to make.

LOW Some odd mission choices that feel like a poor attempt at palate-cleansing.

WTF We still have one-hit kill bosses instead of actual difficulty? Yeugh.

Bioterrorism that doesn't involve zombies and instead focuses on nucleotides, viral breakouts, and DNA is a welcome change of pace. This is what Transcripted starts to offer, with the player's role being that of Adam, a scientist controlling probes to fight a viral terror in a world so tiny that video games must zoom it in for our eyes to see.

The form this takes is that of piloting a miniscule probe while shooting organisms, and then grabbing colored cubes to shoot at other cubes for a match-three set. There's a bit of blending of what some might call "casual" and "hardcore" elements, and they come together fairly well here.

Transcripted pays a lot of attention to fine detail that serves it well: great color composition and gorgeous graphics make it feel like a glorious ride through scientific artscapes, an upgrade system that allows the player to decide exactly how they want to progress based on their style of play, and voice acting that bolsters the script. However, apart from the vocals, the story seems to meander and play up a subtle melodrama: no one performance is over-the-top, but the circumstances presented keep piling up like a favorite television show which inevitably starts creaking under the weight of its own challenges.

The mechanics are amusing enough to carry the game, though. The match-three setup itself isn't too exciting, but new enemies are added as progress is made. New challenges also start appearing, with bonuses to gain and negatives to curtail. These range from new blocks that set back progress if they reach the end of DNA chain, to enemies who go through a form of mitosis and start multiplying. It's imperative to take these out as soon as possible to avoid the bullet hell that will result. Apart from all that, there are bonuses to be gained from getting chain reactions, finding power-ups to increase weapon strength, and other goodies that serve as a delight for any player who enjoys shmups.

Unfortunately, every so often the game decides to provide a wholly new type of level as a palate-cleanser, where instead of attacking, defense becomes the priority. Or, it throws in some boss fights, because that's how games work, and we can't play games without boss fights. Unfortunately, these breaks from the formula aren't well implemented. For me, personally, my stopping point became a boss fight that suddenly had one-hit kills, invalidating any work I had achieved in beefing up my shields. It also disservices the plot, creating moments of false "drama" that frankly feel so gamelike, it's a wonder that a plot was needed at all.

Transcripted's mashing of genres does work despite its hiccups. As a game to play here and there, it is a nice distraction with plenty of ways to change how it's played. Given the production value and obvious care that was put into everything, it just seems a shame that some of the later game is bogged down with the need to provide new elements that only make the game more frustrating than it ought to be. As a challenge, and as a way of thinking of how to combine different forms of play, it is quite the success, though. Rating: 6.0 out of 10.


Disclosures: This game was obtained via the publisher and reviewed on the PC. Approximately five hours of play were devoted to the single-player mode, and the game not completed. There are no multiplayer modes.

Parents: According to the ESRB, this game contains mild language and mild fantasy violence. The language is never too explicit, with the usual utterances repeated for consternation. The violence that is perpetrated is against molecules and microscopic organisms that don't really convey lasting damage, though there is a certain fleshiness to the design that may discomfort some children.

Deaf & Hard of Hearing: Everything that is spoken has subtitles as part of the game, and the noises seem mostly there to provide feedback that is not essential and is readily obtained via visual cues. 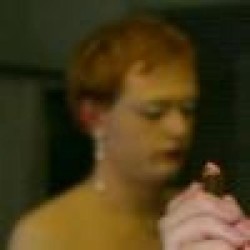