The Revolution… no really, we mean it this time! 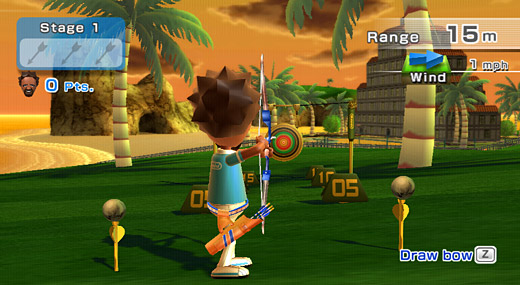 WTF Trying to Cycle with my hands equals "Why?" plus "Ow".

It's been 33 months since the Wii first launched. While wildly successful, many gamers—okay, almost every single gamer—have questioned the validity of the Wii. And though we're finally used to its name, it hasn't really lived up to its codename: Revolution.  With Wii Sports Resort, Nintendo is trying to realize the infamous teaser video from almost four years ago.  But does adding a chunky box redeem months of broken promises and control schemes?

The Wii is a popular hit with the sweater-wearing soccer mom crowd and, oh yeah, gamers who are willing to buy only four or five games a year. Mercifully, there is a lot on WiiWare these days, but real honest-to-goodness triple-A titles are few and far between and, once again, they tend to come from Nintendo themselves. In a recent podcast, the Gamecritics.com editors spent about an hour expounding upon the woeful state of the Wii. And for the most part, I agree with them.

The basic facts are inarguable. Proportionally, the Wii has tended to have more so-called "shovel ware" (read: toilet titles) than any other system this side of the big video game crash of the early 1980s. The fault seems to be two-fold. On one side, there are lazy developers who seem to port titles from the high-definition systems (or invent absolute garbage) and simply replace button presses with gestures that tend to be hit-and-miss. On the other side, though, is the Wii Remote itself.

The problem is the Wii Remote on its own doesn't contain enough sensors to replicate true 1-to-1 movement. Missing is a gyroscope which can detect twists and relative position. With the advent of Wii MotionPlus (WMP) this problem has been, mostly, rectified.

It is easy to fault Nintendo for not including this until now. However, a little research shows how finicky gyroscopic technology is. Try using a Sixaxis (hey wait, when was the last time they used the motion detection in a PlayStation 3 game anyway? Lair, go back up to the attic…). Temperature, humidity, elevation and calibration—not to mention cost—are all big factors when creating this technology for everyday consumer use. 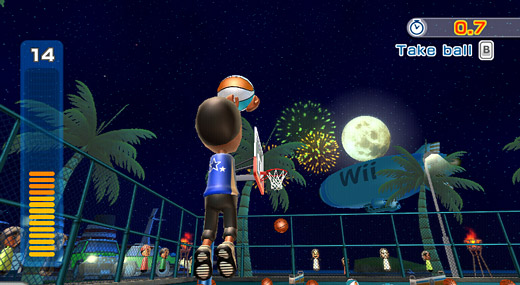 Wii Sports Resort is what Wii Sports was to the original launch: a fun tech demo showing off the "new" technology. However, it lacks the same sparkle that Wii Sports had when it first came out. A large part of this is expectation. Actually bowling for the first time was a novelty; now, it's simply a curiosity. As such, it is very hard to judge Wii Sports Resort as a title. Rather, what should be judged is the controller.

The big question, of course, is whether or not it works. It does, sort of. But before you can even use it, Nintendo has a very condescending three-minute video on how to properly plug the WMP into a Wii Remote. They come pre-inserted into the ugliest Wii condom… sorry, "Jacket"… you've ever seen. Thankfully, the WMP can be popped out and inserted so normal people can use them without having to muss and fuss every time they want to play.

When playing Sword Duel for the first time, you'll be amazed at how the Wii Remote actually mimics what you do, at least for a while. However, every five to ten minutes, things start to feel "off" and the controller must be placed on a flat, level surface for a few seconds so the WMP can re-calibrate.

This seems to be the biggest issue. In making a solution to a problem, a new problem has been created. How are we supposed to have a long play session if designers have to allot some amount of re-calibration time into games? I suppose it's similar to learning to cover loading screens, but one would think that something as important as working all the time would have come up in design meetings.

If you can deal with the occasional hiccup, Wii Sports Resort demonstrates the potential of the WMP. There are twelve main games (each with their own variations and multiple difficulty levels) and many unlockables. Some of the games are really enjoyable, while others are recycled. Bowling and golf, though improved from their original incarnations, barely registered a blip of excitement. Others, like Wakeboarding, are fun for short bursts until you figure out their tricks, but aren't really true replications of their real-life counterparts. Then there are the games that make you question what the developers were thinking. Try to imagine playing "Cycling" but with your hands. No, there is no fun way to imagine it.

The one game that truly stands out is Archery. Using the Wii Remote as the bow and drawing with the Nunchuck, Archery is startlingly accurate to the real sport. The accelerometer in the Nunchuck is sensitive enough to tell how hard the string is drawn, and the WMP allows the precise angle of the bow to be measured. 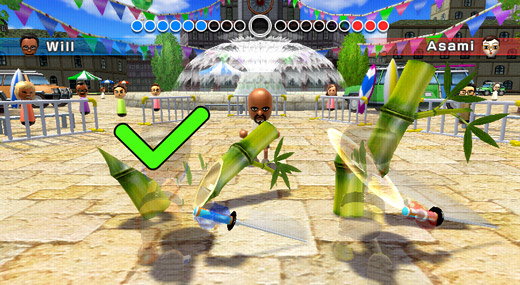 There are other games that show the same potential, but aren't quite as fun. Table Tennis accurately reads the force, angle and spin that is placed on the ball with each swat. Unlike Tennis in Wii Sports, it seems to be harder to cheat with this one. No casual flicks work here. Of course, Swordplay works well, and it is devilishly fun to beat your friends in a duel with a virtual wiffle bat in versus mode.

In this regard, the WMP has helped tremendously. Before, the Wii Remote was simply reading whether or not it moved. Now, it reads how it is moved.

However, by adding the WMP, Nintendo have (mostly) solved only half the problem. The other—lazy or bad developers—is much harder to solve, mainly because it is out of Nintendo's hands.

There are some glimmers of hope. Ubisoft is trumpeting Red Steel 2 as the forerunner of WMP hardcore gaming. Early reports are favorable, saying that the swordplay promised in the first game is finally being delivered.

But WMP is simply a tool. It cannot be seen as a savior to the revolution. At best, it fulfills the promise of the Wii Remote 45 months after we learned about the controller's existence. At worst, it is another add-on that developers may or may not use.

The only reason to be hopeful that it will catch on is how it is being pushed onto the market. Wii Sports is arguably the most important pack-in title of all time. It alone has pushed millions of Wiis off shelves—often being the only game played. I strongly suspect people will pick up Wii Sports Resort on name recognition alone, and be mystified by the odd white attachment inside. If enough WMPs are sold, and enough developers pay attention, it may just work. And if LucasArts  can get off their butts and just make that darn lightsaber game, they'll all be able to retire.

I am hopeful for the possibilities the WMP could bring to gaming. It could end the waggle-as-button problem by delivering accurate controls in a true three-dimensional space. But unless it's utilized by developers—and not just Nintendo—that's all it will ever be: potential. Rating: 7.0 out of 10.

Disclosures: This game was obtained via the publisher and reviewed on the Wii. Approximately 14 hours of play was devoted to single-player and multiplayer modes.

Parents: According to the ESRB, this game contains cartoon violence. Parents have absolutely nothing to worry about in-game, but make sure your kids don't start actually hitting each other with their Wii Remotes.

Deaf & Hard of Hearing: You have nothing to worry about. There are occasional bells, whistles and starter pistols, but they are also accompanied by graphical displays. This game is designed to be enjoyed by as wide an audience as possible

Great article, however I would be inclined to substitute “publishers” in place of “developers” in the article. If the Wii lineup is in the sorry state it is, one cannot simply blame developers of being “lazy” or “bad”. At the end of the day, developers of retail products need publishers. If the publishers says “give us a party game for $100 000”, then one can hardly blame the developer for churning out another uninspiring product. 1st party games are often much better for a reason: Nintendo spends the cash. Any developer with the best of intentions needs to ultimately pay… Read more »

Great review. I’m amazed you were able to put such historical and critical context to a bunch of mini-games. Bravo.