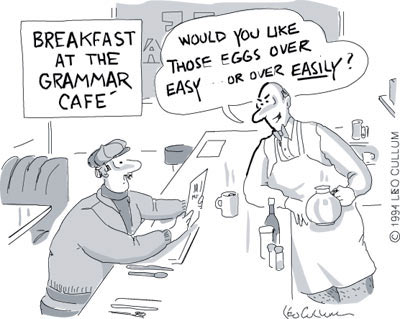 With the recent rush of quality user reviews coming in, it's nice to see that there are a lot of people who know how to write and communicate effectively. Unfortunately, with many Internet scribes using "lol" as punctuation, it's time for the first (and hopefully final, but I doubt it) installment of David: The Grammar Nerd.

"It's" Vs. "Its" – This is one of the most prevalent mistakes I see on a daily basis. "It's" is a contraction of "it is" and should be used as such. For example, "It's really annoying that people don't know how to use apostrophes." "Its," on the other hand, is possessive. It is (or it's, if you prefer) properly used in a sentence such as "It's really a shame that the world has lost sight of its ability to use good grammar."

"They're" Vs. "Their" – Wow, I can't believe I still find this after grade six. Folks, we're talking about "they are" and possessive again. "They're never going to listen to me about how to fix their grammar."

(Also, please do note the difference between "we" and "us." "We" is the plural form of "I" and "us" is something completely different. Just sayin'.)

Between (blank) and I – Using "I" in this instance does not make you sound smarter. "Between you and I, I think people don't know how to write or speak anymore." Like before, try reversing these subjects. "Between I and you…" (See that ellipsis? Cool stuff, no?) It no longer works. Either use "between you and me" or "between us" and things will all work out.

Check. Your. Spelling. – Good God, this is huge. People, it's "ridiculous." Not "rediculous." It may sound like it, but Word (or even OpenOffice.Org) will tell you otherwise. Other words that general suck at being spelled are "definitely" (not "definately," "defiantly" or any other spelling you may try to inflict on the poor victim) or "congratulations" (too many poor examples to count).

I hope these tips make writing easier for aspiring authors, and make reading things much more pleasurable for the rest of us. In the meantime, I'm sure I'll find more mistakes and, after losing a few IQ points while absorbing them, will come back with more Grammar Nerd at some point.

Well done David, and much needed too!

I used to have an editor who told me once I “was at war with grammar”–which is true, but war is such a harsh word. I always preferred “engaged in a skirmish where there may be casualties”.

My biggest pet peeve (of those not listed) is people who fuck up then/than. I see it constantly. Drives me insane. Oh, and people who spell “definitely” as “definately” and the king of all, people who call other people “retarted” as opposed to “retarded”. There’s a ton of irony in that one…