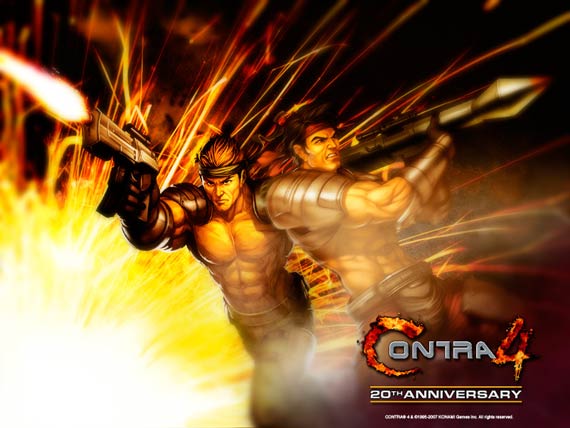 I’m definitely an old school gamer. If you asked me what my favourite system is, I will always answer Super Nintendo without batting an eyelash. The list of greatness pumped out by that system is longer than my arm (and for the record, I am quite north of six feet tall). I’m certain that my list would match many of yours, and I’m also certain that Contra III: The Alien Wars is on that list. Contra defined “manly old school shooter-platformer.” One-hit death, awesome weapons, more testosterone injections than a “post-op” courtesy of two dudes without shirts and phenomenal production values has helped to elevate Contra to the status it has. Like many game makers, Konami has tried to reboot the series a la New Super Mario Bros. or the upcoming Mega Man 9. The result: Contra 4.

Just let that name sink in for a second.

Contra 4. Essentially, Konami has given the finger to all the other games of the series, and said, “Sorry, folks. You don’t count.” This game is all about giving fans of the old-school games the biggest dose of fanservice it possibly can.

For the record, I haven’t played any new Contra title since Contra III. From what I’ve been told, I haven’t been missing much. Even a quick glance on Metacritic tells me everything I need to know about the state of the series since my last experience, created in 1992.

I can clearly see the direct line between Contra 3 and 4, and Konami has gone to great lengths to ensure I can. Pretty much every detail of the game screams old school. Even before turning on the game, the instruction manual tells the story. From using the very same font as the original Contra manual to such nuggets as “Contra Guys: The Dudes Without Shirts” (See? And you thought I was being witty earlier) and “Contra isn’t some RPG where you can save your progress every ten steps…” this game is very much meant for my demographic: manly men who manly played manly Contra twenty manly years ago. Man man. 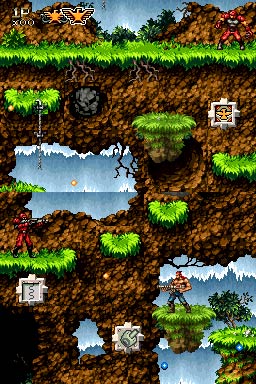 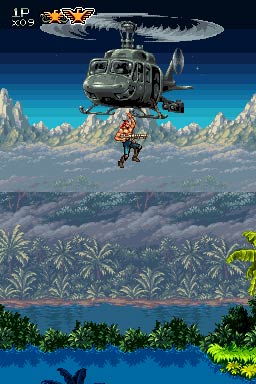 Once the game starts, the relentless manliness continues, but so does that old-school charm. Contra 4 is unapologetically in-your-face old school.  Irreverently self-referential—though not quite at the level of Metal Gear Solid 4—the game is filled with touches that fans ought to recognize. The opening title screen music is a lush, orchestral sweep of the original title’s theme. Then, no tutorial, no major character introductions. You drop from a helicopter (the same one from Super C, the second title of the quadrilogy) with your peashooter and start moving right.  The premise hasn’t changed in twenty years. If it moves, blow it up. If it doesn't move, shoot it anyway. If it blows up, all the better.

The DS provides a very unique presentation method for Contra 4. With two screens, players literally have twice as many places for bullets to rain down on them. Enemies on the top screen can smack you with a sniped shot while you try to deal with the onslaught below, and vice-versa.  Vertically-scrolling areas like the waterfall are a natural fit for the DS, adding extra danger in the form of more enemies, but also helping the player plan their route in advance. To traverse the screens, players have been given a welcome addition of a grappling hook. Most useful during some of the boss battles, it adds a great element of choice and movement that Contra has lacked. Due to the 3D capabilities of the DS, the base levels (last seen in the original title) have been beautifully re-imagined as true 3D spaces. And, of course, it’s still one-hit death.  After hearing the scream of your avatar kicking the bucket for the umpteenth time, a gravelly, manly-mannish voice announces your triumphant re-incarnation with such gems of human discourse like “Come get some!” (Yeah, that little extra can be mercifully muted in the options screen.)

However, there is one flaw that I’m not certain how the programmers could have avoided. When any object is traveling between the two screens, be that you or more importantly, a bullet, the plastic gap between the screens is treated as real space. As such, when playing near the top of the lower screen, I died more than my share of times due to a bullet hidden in the plastic.  (Granted, as a manly man, I have only myself to blame for the death, but still.) 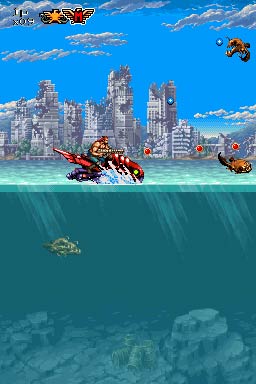 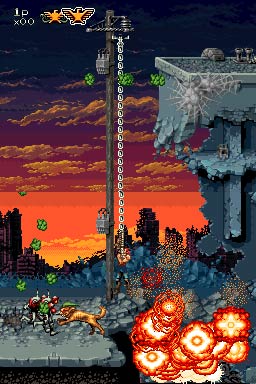 This dual-level design really is used to the fullest effect when playing local multiplayer. Honestly, I have not enjoyed local multiplayer like this in quite a while. It is seamless, smooth, lag-free and a test of co-operation. Often, my Contra partner and I would strategize over who would take the top or the bottom—sounding like eight-year old boys planning how to steal a flag from an opponent’s fort. Other times, we would berate each other for scrolling the screen too far, or being mad that the other guy got the one lucky shot that killed the boss and got that extra life (sorry, extra man).

To remind you of less-wussy times in gaming, there is a Contra museum in the game, outlining the series’ history along with loads of unlockables through Contra 4’s challenge mode. However, it almost seems to apologize for many of the games post Contra III. Most of those games were listed as “not part of the official timeline,”  as though Konami decided that any progress that the series might have made over the last sixteen years didn’t count, and was being quietly swept under the rug. Sadly, the big bonuses are broken. An unlockable Contra and Super C NES emulation was a nice carrot to dangle for me to continue with challenges, but the most crucial part of those titles, the multiplayer, is completely borked. There is no local multiplayer for them, and unless you've got the man skills to play as both characters simultaneously with the same D-pad, you're on your own. A conspicuously-absent Contra III as a possible bonus only adds to the feeling of could-have-been.

These omissions matter, because nostalgia is what Contra 4 thrives on. When the game is at its old-school finest, Contra 4 is the anti-new game that we old schoolers eat for breakfast. (Really, pansy gamers need not apply; this game will beat you to next Tuesday.) At its worst, Contra 4 is everything that gaming has tried to move away from for the last twenty years. But every now and again, it’s nice to be reminded that games can be pure adrenaline-filled manfests. Contra 4 seems caught in the middle: old school enough to alienate new gamers, but missing some features that could have propelled it to great heights for gamers of yesteryear. It is a snapshot of gaming from one human generation ago, full of misogyny and pain. However, it’s good for we old-timers to be reminded of the manly road we all walked down. Otherwise, I might forget how to not ask for directions. Rating: 7.5 out of 10, but 12,000,006 out of 10 man points.

This review put chest hair on my balls. Of course, so does the game. “Let’s party!”

You’re absolutely right, and I apologize to all the folks at WayForward Technologies for the oversight. Thanks to Brad or Chi who corrected this.

I know that there were a lot of serious Contra fans working there – particularly the music. Jake Kaufman is well known in the fanmusic circle, and I was thrilled when he was hired to do the tunes for this game. He adds some fantastic references from the old titles (part of the self-referencing) but adds his own touch to make a soundtrack that’s almost as good as Contra III.

Hey, first of all, it’s a solid review. I do think it’s a bit strange that you seemingly change the game’s release date as if it’s a new release (by comparing it to the upcoming Mega Man 9). Not a big deal, just thought it was a bit misleading. More importantly, you don’t mention the developer at all in your review. You only mention Konami. The guys who made this, WayForward Technology, did all the hard work. Which includes being true to all the old-school charms you speak of. I just think that credit needs to be given, and it… Read more »