In Soviet Russia Platform Jumps YOU! 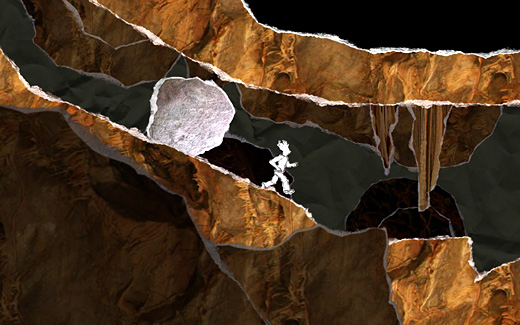 HIGH Watching fire change its behavior because you redefined "up."

LOW Watching your body break apart for the 58th time.

WTF Bats versus lizard in an epic battle!

Platform games have been around for almost as long as consoles have. Heck, arguably the most important game of all time—Super Mario Bros.—is a platformer. So why has it taken thirty years for someone to redefine what a platformer is? Probably because there are so many axioms that, in order to revolutionize the genre apart from adding that third dimension, needed to be brought back to square one. In this respect, And Yet It Moves manages to be both an amazingly fun experience and one of the most important games of this generation.

Bold words, I know, but importance is more than marketshare or awareness. Rather, it is about achievement. On the surface, And Yet It Moves is a game with a gimmick: not only does the player have to jump from platform to platform; he also has to rotate the world in order to open up new paths. Look a little deeper, and you’ll start to realize how paradigm-shifting this philosophy really is.

What is a platformer? Apart from the basic mechanics, it is a series of obstacles (immobile, destructible,  movable, etc.) that the player must traverse along a relatively set path to a final destination.

Most often, this is a simple left-to-right path in a two-dimensional world. While games like Super Mario 64 do add more dynamism, ultimately the platformer ends up being a linear obstacle course.  If you think about children in a playground (“run around the tree, through the monkey bars, backwards up the slide, down the ladder and touch the tree again”) creating a platformer environment is seemingly in human nature.

Add to this the fact that everybody has likely played Super Mario Bros. at one time or another, and you realize the universality and importance of the platformer. Its grammar and syntax are self-evident. Its rules are equally obvious. That pit that has no bottom? Probable death. Enemies in front of you? Stomp their heads, unless armored or spiked. Nobody really has to explain this to anyone. And Yet It Moves fundamentally alters this familiar premise by allowing the player to change the world at any time by rotating it.

And Yet It Moves has traditional straight-pathway traversing to do, but this is part of the grammar of the platformer, as mentioned. What matters is that 'up' will change with each twist of the Wii remote (or press of a button.) This in turn will affect the physics of your character. 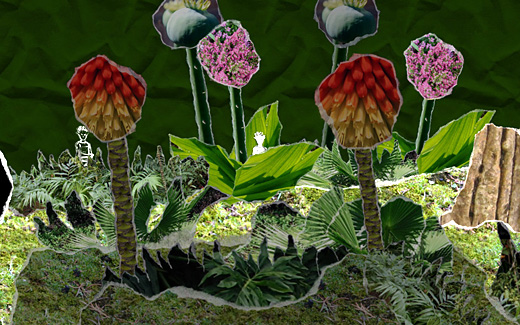 In most games, what goes up must come down. And Yet It Moves allows an exception by letting the player suspend in mid-air, rotating the world non-stop. However, acceleration continues despite the lack of forward momentum—forward is now spinning in this case—and a short jump of only a few meters becomes akin to falling off a cliff. A new definition for player death is suddenly created.

These physics also affect elemental materials and character behavior in the game. For instance, fire only burns in one direction: up. If 'up' is suddenly redefined to the fire, it has no choice but to follow the new ruleset, resulting in some enjoyably complex puzzles to clear the way.

Bats, too, follow a set of rules like fire. Bats want to stay on the ceiling. Change where that is, and suddenly they are being herded to defeat a lizard blocking a path simply by re-orienting them. Water flows down to up if you choose; droplets follow the laws of gravity, depending upon how the player defines those laws.

Don't be scared of so much newness, though. And Yet It Moves definitely subscribes to enough platform standards to prevent players from being totally lost. Checkpoints are plentiful, and a white silhouette points the player in the right direction. But, just because there are recommended paths doesn’t mean that they are the only paths.

Later levels become gleeful free-for-alls with wide open spaces aplenty. One level allows the player to sidestep three quarters of it by rotating the level opposite the recommended direction. That said, the constant laws of forward-momentum physics prevent some obvious shortcuts. There may be a lot of bendable rules, but gravity still kills, no matter which direction it pulls in.

The joy in And Yet It Moves comes not from amazingly beautiful environments or gleeful surprises like Super Mario Bros., but from understanding and inverting preconceptions of its world. Ignoring the ripped-paper aesthetic and cool minimalist soundtrack, the spark of understanding how objects and places react to rotations as puzzles are solved ends up being a great carrot.

Most people will probably look at And Yet It Moves as a cool indie WiiWare title (also available on PC and —gasp!—Mac), and form the perspective that it’s a great head-scratching puzzler/platformer. However, look just a little deeper, and you’ll find a game that questions the basic tenets of the genre we’ve been playing for thirty years. Of course, And Yet It Moves only scratches the surface of possibility, but it is a journey absolutely worth taking. Rating: 9.0 out of 10. (It looks like 6.0 if you're upside down, but really, it's a 9.0)

Disclosures: This game was obtained via publisher and reviewed on the Wii. Approximately 8 hours of play was devoted to single-player modes (completed main game and most of the time trials).

Parents: According to the ESRB, this game contains mild violence. The worst thing that happens is falling too hard and the cardboard cut-out character falls to pieces. This game is suitable for all ages.

Deaf & Hard of Hearing: While these players may miss out of the cool ambient soundtrack, there are no significant audio cues affecting gameplay.