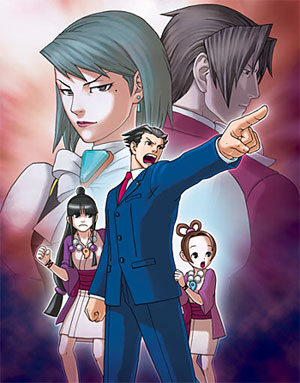 Oftentimes, a series can be phenomenal to start, but if the first installment is successful, creators will bleed it dry. Other times, writers will try to give further plot or back story that fundamentally alters everything the previous efforts have all worked towards. The laughs for Darth Vader's "NOOOO!" can attest to that. I've seen it in movies, and it's certainly seen with games. What ends up happening, of course, is an entire series can be tainted by "tacking on" new material in the hopes it will line up with the prior installments. Sadly, it often ruins the entire experience, or simply isolates the "good parts" from the rest of the canon.

The Phoenix Wright series risks this problem, because the character is a one-trick pony. He's a lawyer, and that's about it. My concern when approaching the latest title in the series, Phoenix Wright: Justice For All, was its the ability to flesh out characters, story and overall quality. After all, my fears are not without foundation. There are numerous examples of films and books that fall into this trap; see the Hannibal Lecter series or the aforementioned Star Wars series as prime examples. Even my favourite gaming series, Castlevania, has its black sheep (to this day, I'm not allowed to talk to anyone about the Nintendo 64 titles; it is verboten). Thankfully, Phoenix Wright: Justice For All manages to do everything right, and for all the right reasons.

While trying to respect Andrew Fletcher's blog entry, the most important thing to know about Phoenix Wright: Justice For All is that it is imperative that one play the first title before playing this game. Many characters make a return, and many previous plotlines are directly related to new events. There are a number of references and inside jokes that would be completely lost on a new audience. If anything, this is Phoenix Wright: Justice For All's biggest problem. The good news is, since that's the worst of it, the rest of the game is top-notch.

Phoenix Wright is made or broken by its writing and characters. In my second-opinion of the first Phoenix Wright title, I compare the game to a book due to the linear structure, and its focus on characters, writing and thinking as opposed to standard reactionary gameplay (enemy attacks, hero dodges/fights back). The same rules apply here. Anyone who hated the first title's feel and interface will continue to be disappointed. For the rest of us, playing Phoenix Wright: Justice For All is like conversing with an old friend after graduating from college: the core foundation is there, but there's a lot more to tell, and hopefully the friend has grown a little.

A number of new gameplay features give Phoenix Wright: Justice For All much more impetus than the first game. In the previous installment, the player gathers evidence in an extremely linear fashion, then argues in a courtroom. If the wrong piece of evidence is present, Wright is penalized, leaving the only real possibilities for tension in the courtroom setting. In a wonderful twist, it is now possible to lose the game outside the courtroom, during the investigation. Thanks to an (admittedly, slightly gimmicky) new feature called a "Psyche Lock," players must present evidence-or people, as they can now be presented from the game's inventory, the court file-to characters in order to get all the pertinent information. Present the wrong piece, and Phoenix's life bar (another innovation) decreases. Present too many and it's game over.

But even more than that, Phoenix Wright: Justice For All weaves a remarkable tale that carries itself much more fully than the first game. Despite the game being broken up into four chapters-with the fourth chapter being about as long as the previous three combined-there is an arc that encompasses the whole game, demonstrating much more sophisticated storytelling. Characters and events from previous chapters become important cues and clues. Again, many of the characters and motivations are drawn from the first title, but with new context added to them, and without destroying any previously-held notions about the characters. It is difficult to explain this without spoiling specific details, as the fun in Phoenix Wright: Justice For All is in the discovery, but trust me; it's there.

However, Phoenix Wright: Justice For All's finest element is the protagonist himself. Not simply content with having Phoenix be a mouthpiece or simple avatar, his drive and motivation come into play heavily. By the end, he faces many moral questions about what it means to be a lawyer, to believe in someone, and how to choose when a life is on the line. The whole game culminates into one decision, with gravitas rarely seen in games. There are real implications as to what Phoenix chooses to do, and how he views his client. To this end, the creators have thrown in multiple endings depending upon Phoenix's choices. It's not just a point-and-click adventure story; there's something much deeper here.

I hope that future Phoenix Wright titles are able to keep the character and plot development at the same level achieved in Phoenix Wright: Justice For All. The series is a refreshing break from the genres and bombastic titles that are flooding the marketplace. It's a niche title to be sure, but one that's very much worth the effort to play through and think about. Other series, even in other media, should look at how Phoenix Wright: Justice For All handles expansions to its canon. Maybe it would save all of us from unintentionally laughing or ignoring them. Rating: 8.5 out of 10

I have no objection whatsoever to this review. Actually, to me Phoenix Wright isn’t nearly a book as much as it is a manga (or a Japanese comic book). There’s a particular genre in manga that I call the “concept genre”, and it’s a kind that usually focus on certain subjects, such as sports (examples: Slam Dunk, Hikaru no go, Prince of Tennis, Hajime no Ippo). These genre usually try to take a concept further by paying attention to each meticulous details, sometimes with exaggeration. In Phoenix Wright’s case, it’s a “manga” about judicial systems. Even if certain parts of… Read more »