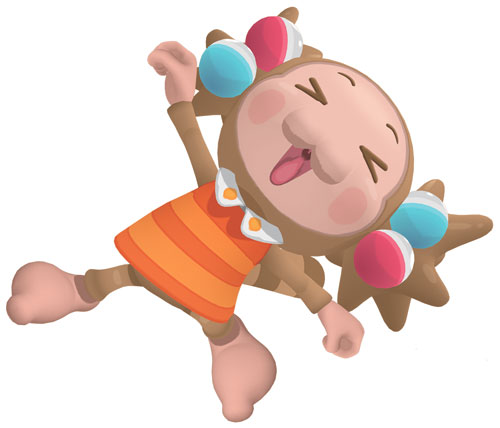 The control's the thing on the Nintendo Wii. It's the main aspect that separates the console from its competitors. Still in its infancy, there are cues that are beginning to emerge from the launch titles, showing what can or should be done in a Wii game. From what I've been able to play, there are three conventions that a game for the Wii ought to follow. First, it shouldn't be a rushed port from another system with a new control scheme shoehorned in for its own sake. Second, it ought to present a new method of gameplay, and have it work.

Third, and most importantly, it shouldn't hurt.

On paper, Banana Blitz is a perfect fit for the Wii. Having appeared on other consoles with varying degrees of success, this "re-imagining" of the franchise is a bold step in the right direction. Over its numerous iterations, gameplay has been controlled using the analog stick (with the obvious exception being the DS game, which didn't turn out all that great to begin with). However, the interesting mechanic of Super Monkey Ball has always been that it isn't the monkeys that move with the joystick, it's the plane on which the monkeys roll. The idea of using an accelerometer-based controller to raise and lower the playing field has an immediate appeal. 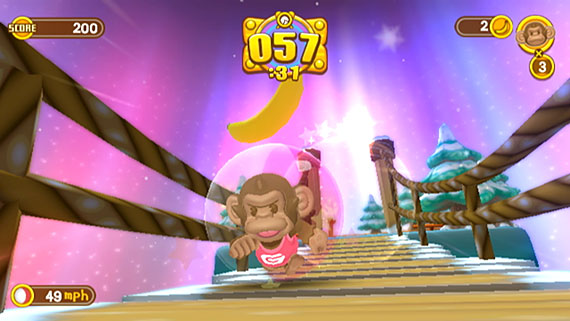 By using this control scheme, Banana Blitz manages to follow the first convention quite well. Though short, the single-player mode presents a fun array of levels, even though the layouts look awfully familiar to anyone who has ever played a Super Monkey Ball title before. Challenging hazards such as steps, moving platforms and moving hazards designed to knock the ball off the course are there as if they were being ticked off a checklist. Quite frankly, these clichés are what have choked the series into near obsolescence. The control scheme change is what prevents Banana Blitz from feeling stale. There is obvious forethought to this set-up, which hopefully other developers will follow.

Unfortunately, there are also examples here that developers should learn not to follow. While the second convention is partially-followed-the game is definitely presented in a new way-it sadly doesn't work properly. The key to Banana Blitz's failure falls squarely on the sensitivity of the controller and the way the programmers don't seem to understand how people's bodies work. The Wii remote is surprisingly adept at picking up the slightest movement. It's a shame that all this movement is literally-translated. Every little nudge, every little flick and every little twist has real consequences onscreen, but to a fault. Heaven forbid the player sneezes. When trying to control acceleration on a hill, I tilted my controller back a little bit to slow the roll. Sounds logical so far, right? Somehow, my monkey decided to pull a 180 and felt more at home in a game of Lemmings. I've never encountered a game where the mechanics are such a problem to the point that I know I didn't do anything wrong, yet still hear a horrible shriek accompanied by a serene "Fall Out!" from the effeminate announcer.

But the control problems don't stop there. Turning is accomplished by twisting the remote as opposed to pointing it side-to-side (thus emulating the movement of the plane). Human wrists are not designed to twist in the ways that are necessary for Banana Blitz. Worst of all, there is no way to set an individual "neutral" point for the remote. The only way to stop rolling is to hold the remote perfectly still and parallel to the ground. When I sit and hold the remote, there is a natural upward incline that the remote has due to my physiology. Banana Blitz interpreted this as "monkey go backwards" and off I careened. Oddly, that wasn't the worst part; it was when I wanted to move forward that caused problems. Since the remote has to sit parallel as neutral, "forward" is pointing the remote downward. 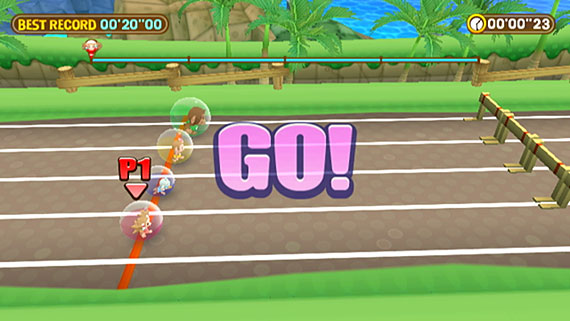 Remember point three? The part about the pain? Yeah, about now is where that one kicks in.

There is simply no way to play this game comfortably while turning and moving forward. I tried for many hours, struggling to gain some sort of equilibrium. I even went into a practice mode to go in plain circles and still couldn't pull it off. I tried holding the remote with two hands, balancing it on my knee, anything to stop the searing pain. I don't know how this kind of effect could be overlooked during development, short of blindly releasing something different for difference's sake.

Not all is doom and gloom, as Banana Blitz is a fabulous party game. The minigames (of which there are fifty) use different control set-ups than the main game. All the old favorites are back, but use the Wii remote much more effectively. Monkey Bowling, for example, is a fun take that operates similarly to Wii Sports. Others use the nunchuk attachment for tank-like controls — Hovercraft Race is a new favorite past-time. Why Sega didn't learn from this part of the game is a mystery. Every game, despite the sheer number, is great fun to play and is truly imaginative. And best of all, it's pain-free.

I used to think that the only thing stopping great Wii games was developer imagination. With Super Monkey Ball: Banana Blitz, I learned that human physiology could be a problem as well. It's a valiant first try, but the Monkey Ball franchise needs a lot of help before it can gain the respect that it yearns for. Or they can package the game with painkillers. Rating: 5 out of 10

From the little I played so far, I found the main game relatively easy to navigate — I cleared the first world and half the 2nd world in about 30 mins of play. However, I found the minigames to be incosistent. I had games seemingly not understand my wii-mote movements — something I don’t experience in Warioware or Wii Sports, but has happened several times in the Monkey Ball mini-games.

So for me, the main game is relatively entertaining (not $50 worth), but the minigames need improvement.