The Adventures of Pip's premise is brilliant. It's a 2D side-scrolling platformer in which the protagonist morphs between three versions of himself; He's got single pixel, 8-bit and 16-bit incarnations. It's a wonderful central idea, but at this stage it's unclear whether it will be fully utilized.

The opening forest stage I played was attractive, with clean, vibrant colours and layered pixel art, and it served as a gentle introduction to Pip's various incarnations. As single-pixel Pip, I moved slowly from left to right, jumping on enemies and opening chests with appendages unseen. In this form, Pip can fit in tight gaps and bounce the highest. 8-bit Pip can run, wall jump and punch, but can't squeeze through small gaps like his foetal pixel form can. 16-bit Pip gets a sword, can break through blocks, and can push and pull heavy objects, but can't wall jump. When Pip kills a glowing enemy he transforms into a higher version, but can de-rez himself back down with a block-breaking burst.

There's a nice tradeoff between the abilities at all levels, with the game requiring Pip to frequently go down (as well as up) to progress or reach hidden areas. It's intriguing to gain and then subsequently lose abilities, touching on the Metroid-style thrill of shifting the protagonist's relationship to the environment, but in the context of something more restrictive and linear. It's unclear if the differences run much deeper than his abilities as the core dynamics of platforming and combat don't shift much when Pip changes stage. 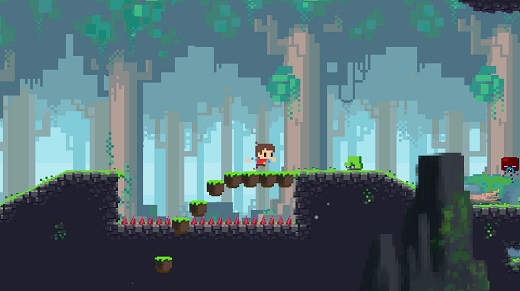 The opening stage was not very challenging, with quickly dispatched enemies, easily reached platforms, high health, and minimal penalty for going wrong. The level design is notably restrictive, necessitating Pip to drop down a stage to bypass block barriers, although a glowing enemy spawned into the level for my use when I intentionally dropped Pip down a stage too far. Consequently, it's somewhat unclear whether the focus will be on utilising the switching mechanics to create complex platforming sequences, or something more puzzle oriented. There's a potential for both, but the gentleness of the opening hinted at neither very forcefully.

While the game is rooted in video game game cliché (there's a princess to rescue) one of the pleasing inclusions is the coexistence of 8- and 16-bit people. On one level it's part of the game's (and wider indie scene's) reverence for classic videogames, which is part of what makes the central gameplay hook so appealing. However, it also humorously points to a deeply rigid class society with a decadent 16-bit upper class and lowly 8-bit villagers. It doesn't look as if the game will delve much into the realm of socio-economic politics, but it's interesting colour.

It will interesting to see how much is done with the core conceit. The juxtaposition of 8- and 16-bit elements is intriguing, but I hope it's explored further than the demo has revealed thus far. However, while it's not clear what the flow of the rest of the game will be like, the switching is aesthetically and mechanically satisfying enough that I am excited to see what else Pip's adventure brings.