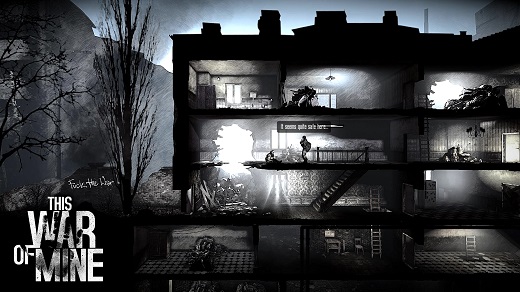 I'm not quite sure what to feel about This War of Mine. It's a game about war but not about soldiers; about the pain of conflict and the grinding pressure that war exerts on everyone. While I appreciate the nobility of its intentions, its mechanics don't quite match up with the message in the preview build I played.

This War of Mine takes place in a run-down abode shown from a 2D side view. I controlled three characters with the mouse, each with distinct backgrounds and their own special ability. Pavel could run fast, making him better equipped to scavenge at night, for example, while Bruno was a good cook and required fewer resources to make a meal.

Gameplay is split between night and day. By day I used what few supplies I had on hand, furnishing my house with a bed, stove and other necessities. There was rubbish to clear, cupboards to empty, items to craft. All of this while the clock ticked inexorably forward.

By night, one person can scavenge from a selection of local buildings (each with different kinds of supplies) while the others sleep or guard the house. There's a simple 2D stealth element here, but the emphasis is on choosing what items to bring back for activities for the next day. There's only so much I could fit in Pavel's backpack — is it more urgent to get supplies to upgrade our workshop? Or more important to try to find food and meds? 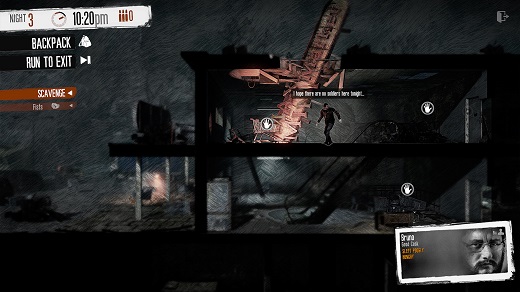 Separating the game into two cycles this way created a pleasing rhythm of play between gathering and utilizing my resources. Each transition allowed for a moment of reflection about what to do next, and stopped either activity from becoming too monotonous. Both night and day also bring tough decisions — there's a constant low-level stress from the paucity of supplies and time moving forward. Hunger, tiredness, illness and injury all quickly become issues requiring attention. It's engaging but not fun, which I suppose is the point.

The aesthetic is similarly stirring, but oppressive. The muted palette of greys and blacks, and the scratchy shifting backdrop are beautiful in a melancholic way, as are some of the delicate animations, but it's draining to play. In addition to the mechanical stresses, there's an initial lack of clarity to the UI and upgrade system which made my first couple of plays particularly grueling. Perhaps this was intentional?

Much of the power of This War of Mine (like Papers, Please and Gone Home) comes from where it stands in contrast to triple-A games. I didn't shoot anyone or disarm a bomb here, instead I scavenged for supplies, fixed a radio, and ate some food out of a tin. The intentional domesticity and the humbleness of my interactions grounded it in the real world… at least initially. 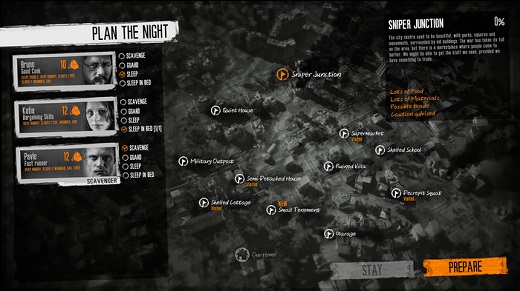 However, it's easy to lose the sense that this is actually about war — in this game it's supposed to be a thing which means everything stops and people just try and survive. However, one of the sad aspects of war in the real world is that this isn't actually true. People often still have to try and work, or go to school. They have to face the impossibility of trying to live a normal existence when so much is in flux. This War of Mine doesn't really capture the day-to-day of what it's like to be in a conflict zone. It doesn't integrate the various agents at play, such as the armies, the organisations, or the media. It simplifies war to a totality rather than an amorphous interaction of various social, political and military forces, and as such, its setting seems closer to a post-apocalypse than a true war zone.

Further, in trying to speak about war abstractly, the game never gives specifics about the conflict or what the survivors think about it — it ends up de-politicizing the game to some extent. Those omissions are hugely significant elements in how anyone experiences a war, and the relative lack of context saps some of the game's potential.

This War of Mine captures a haunting sense of desperation, but despite its best intentions, it doesn't quite capture war from a civilian's point of view.