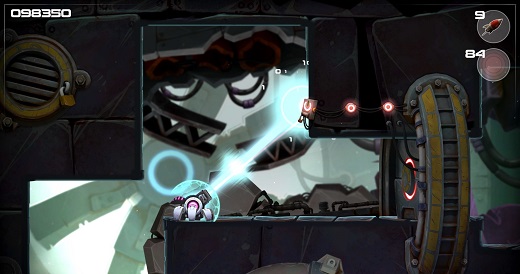 Rive is an interesting departure for Two Tribes.

I'm a particular fan of their previous cute-but-exacting puzzler Toki Tori, so Rive's announcement left me curious about this action-focused 2D shooter. After playing the tutorial which introduced some of the game's elements in isolation there's definite promise, but until they're combined it's hard to know how successful it will be.

Playing as a spider tank from a side-on 2D perspective, I could jump, shoot in 360 degrees, and most significantly, hack some of the robotic enemies in the game.

The movement and shooting are satisfying, speedy, and smooth. Notably, Jump was mapped the left trigger. giving scope for nuanced movement while shooting. The best moment in the demo was during a boss fight which required me to vault over and shoot down at the boss at the same time — it served as the successful crystallization of Rive's twin-stick and action-platformer blend.

In general, however, the enemy encounters were somewhat lacking.

The majority of enemies rushed at me in crowds or fired upon me absentmindedly, and none have particularly striking design. In a top-down twin stick game like Geometry Wars, such simplicity is perfect as the focus is on the gradual escalation on multiple enemy types over the course of the game, rather than on individual encounters. In the context of Rive, these encounters don't quite work for the most part because those types of enemies aren't as engaging to fight, and reveal the tension wrought from Rive's genre blending.

Apart from the shooting, hacking seems to be one of Rive's central hooks.

Hacking allowed me to open a locked door, hack an enemy healing bot to follow me, and intriguingly, hack a flying enemy into projecting an anti-gravity field around itself — staying in the enemy's field allowed me to leave a vertical chamber. Moments like this added something more than the perfunctory enemy encounters. Other potential hacking abilities and some items (such as EMPs and rockets) could possibly lead to a more emergent and engaging play experience.

Rive feels uneven at this point. Moving and shooting as the spider tank feels fantastic, and the aesthetic is crisp and colourful. On the other hand, the combat, hacking and items all feel quite simple. Whether this is a product of the demo's artificial demarcation or a more fundamental lacking is unclear — it will be interesting to see what the game's like with all of those things are put together.