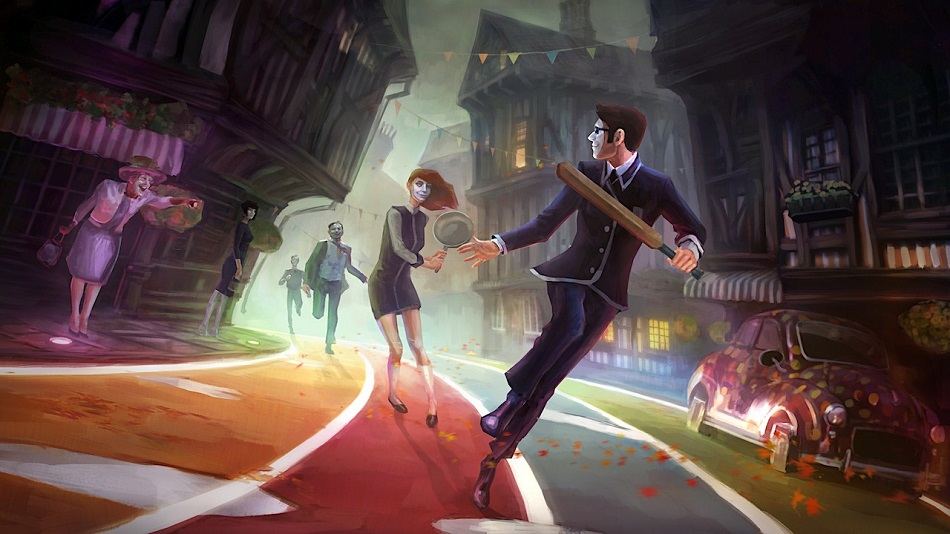 WTF The Wellies get off by stinging each other with electric batons while wearing a rubber suit.

We Happy Few tells three compelling stories in a one-of-a-kind, dystopian world that is brilliantly inspired by real-world events and twentieth century literature. Sadly, it fails to translate its vivid ideas into an enjoyable experience.

Structurally, We Happy Few is a first-person real-time action-adventure with open world features such as dynamic quests, exploration options, a crafting system and skill trees uniquely designed for each of the three available characters. The player can move freely in the world and make use of weapon physics in combat to attack, block, dodge or throw items when engaged in a fight. We Happy Few also consists of scripted cutscenes, as well as interactive and optional backstory elements found in exploration.

The frightening art style of We Happy Few is used to present the 1960s English town of Wellington Wells, full of constantly drugged people forgetting their pasts, police state control over the media, and strict laws requiring every citizen to wear masks with the mouth shaped in a big smile.

The best side of We Happy Few is when it tells the story of Arthur, Sally and Ollie. All three suffer from memory loss due to taking the village drug, called Joy. However, their memories come back to them as they stop using it, and as memories return to them, the player learns about the past of Wellington Wells. Interestingly, despite the stories being connected and intersecting with each other, key interactions took place in different spots for each of the characters — it kept me wondering which of the perspectives I could trust, and felt almost as if the game itself was drugged. 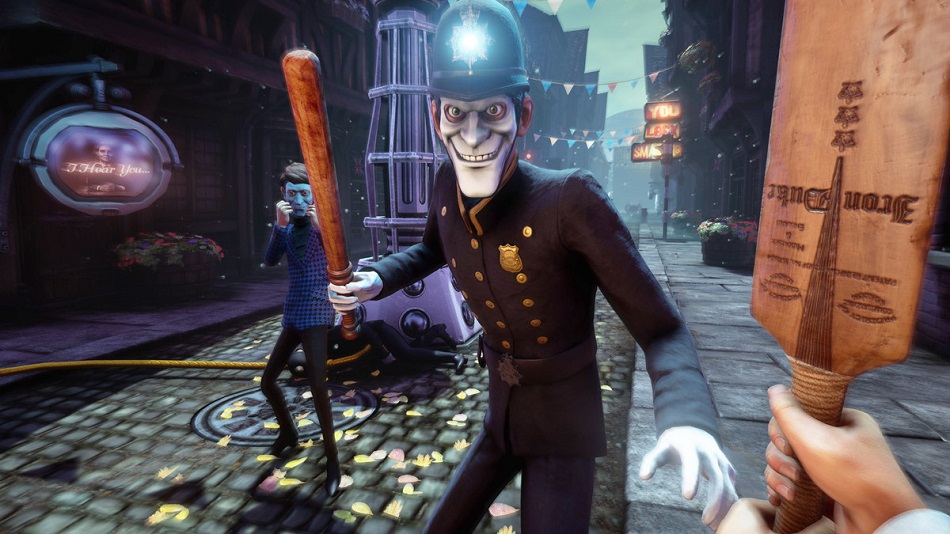 Arthur, Sally and Ollie are presented as ‘’moderately terrible people’’, as they, like most Wellies, have done something awful in the past. Arthur abandoned his autistic brother, who was sent to Germany. Sally moved in with Arthur after a family tragedy, only to sleep with Arthur’s dad. Ollie was a wartime failure. There are redemption arcs for the trio, and certain scenes showed that revelations can be powerful and unexpected. Both sides of morality are also shown.

Also noteworthy were the variety of options in some puzzles, most being able to be solved in at least two ways. For example, I had to get upstairs in a building with two doors locked. One way up was through a door requiring a keycard, while the other had to be lockpicked. In this instance, I had the option to choose between depriving someone of their keycard, or creating a distraction so that I could lockpick without raising suspicion.

Despite the strong plot and flexible puzzles, We Happy Few has major issues that ruined my playthrough.

Technically, the game isn’t built well. I played it on the PS4 Pro and frequently noticed buffering textures, extended loading times, glitching NPCs, and enemy AI that failed to work correctly. Additionally, the game also crashed three times in my playthrough, two of which on the same spot, practically disabling one particular side quest for me. 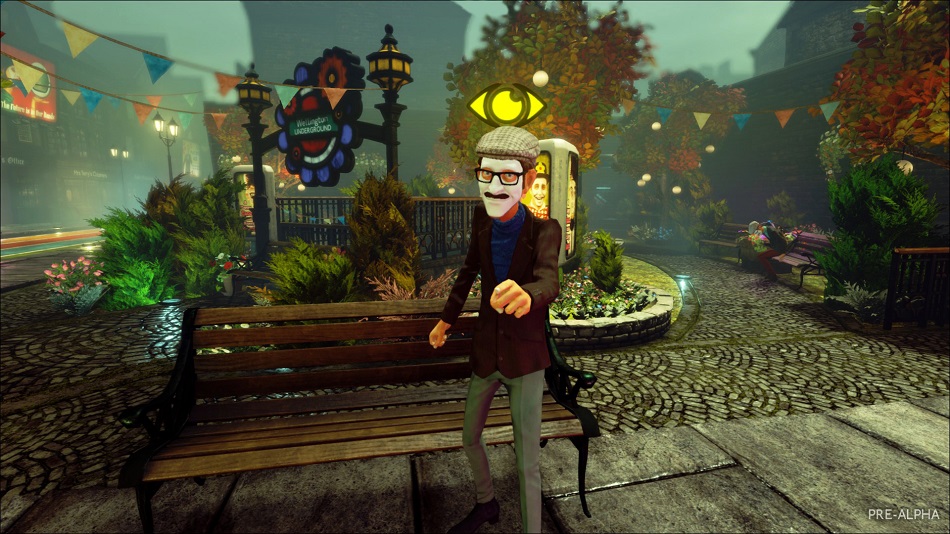 Also, We Happy Few doesn’t seem capable of living up to its own enormous scale. The game is presented as an explorable open world, but the areas of movement are linear, which means most of the possible exploration comes from backtracking, and exploration itself isn’t engaging because the houses, gardens and streets are almost all identical to each other.

The rest of the content is little better. Combat is just a matter of blocking, pushing and hitting others, while scavenging and crafting involve gathering the same materials over and over. Additionally, there’s a lot of distance to be covered, but running is not allowed in the city. A clever fast travel system helps, but traversal is still an issue.

A pleasant surprise was that the voice acting is wonderful and made optimal use of the (mostly) magnificent dialogue. All speaking roles used genuine British English, and the actors all sounded like they were truly absorbed in their specific roles. The three main characters especially had some astounding performances — their work kept me going when I was feeling fatigued by the stale gameplay.

Overall, there are some incredible ideas in We Happy Few‘s dystopian world, but the tedious gameplay gave me the feeling that a project like this has more potential as a story-driven adventure in a more compact world. With greater focus on its excellent narrative, sound and visuals, and an addition of moral choices, it would rise above the unsatisfying mixed-genre affair that it currently is. Rating: 5 out of 10

Disclosures: We Happy Few was developed by Compulsion Games and published by Gearbox Publishing and is available on PC, Xbox One and PS4. This copy of the game was obtained via publisher and reviewed on PS4. Approximately 25 hours were devoted to the game and it was completed. There are no multiplayer modes.

Parents: We Happy Few received an M from the ESRB for Blood, Strong Language, Suggestive Themes, Use of Drugs and Alcohol and Violence. The official ESRB description is as follows: This is an action/adventure game in which players assume the roles of rebellious citizens in an alternative 1960s England. From a first-person perspective, players explore Wellington Wells, interact with citizens, collect various items, and fight hostile citizens. Players use pipes, axes, bone saws, and explosives to attack and kill enemies. Combat is highlighted by splashes of blood and cries of pain. Some scenes depict corpses lying in pools of blood or hanging from nooses. In one sequence, characters can be seen inside a club wearing rubber suits and zapping each other with electric batons; characters are depicted making suggestive moaning sounds and caressing themselves when shocked. During the course of the game, players’ character can ingest pills (Joy) that cause hallucinations when overused; some areas also include hallucinogenic mushrooms and whiskey that cause screen distortion or discoloration when consumed. The words “f**k” and “sh*t” appear in the dialogue.

Deaf and Hard of Hearing Gamers: There are subtitles available for all dialogue, and the text is resizable. This title is fully accessible. 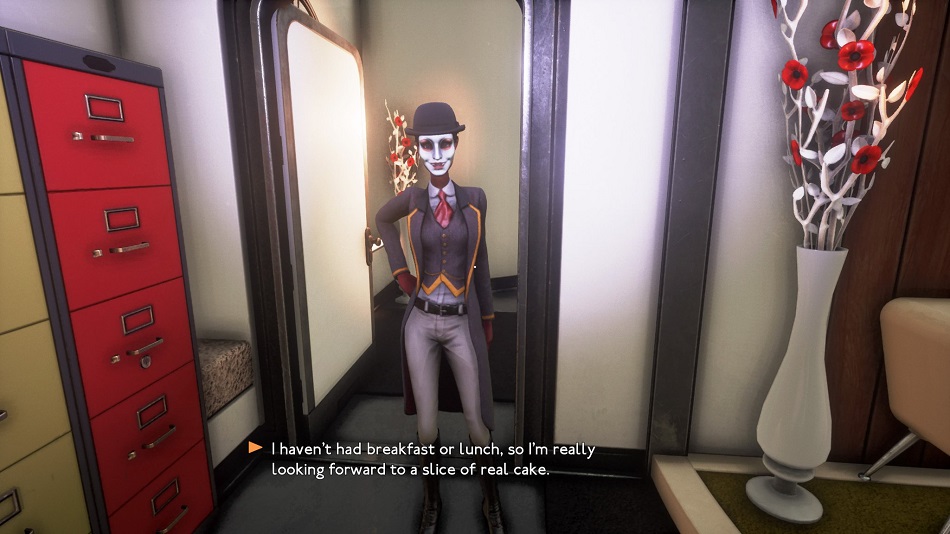 Remappable controls: The controls are not remappable, but the sensitivity of the camera is adjustable. This game does not offer a controller map diagram, but movement is on the left stick, camera is on the right stick. Jumping is X, interacting with building and people is the square or triangle button and cancelling an option is O. Selecting/deselecting a weapon is R1, hitting is R2 and pushing is R3. Selecting a support item is L1, blocking is L2 and sprinting is L3. The touchpad opens the game menu with information, crafting and a map of the world.

No denying there are some technical issues and some gameplay aspects can get a bit repetitive. But I enjoyed the game. The story and mystery were enough to keep me going.