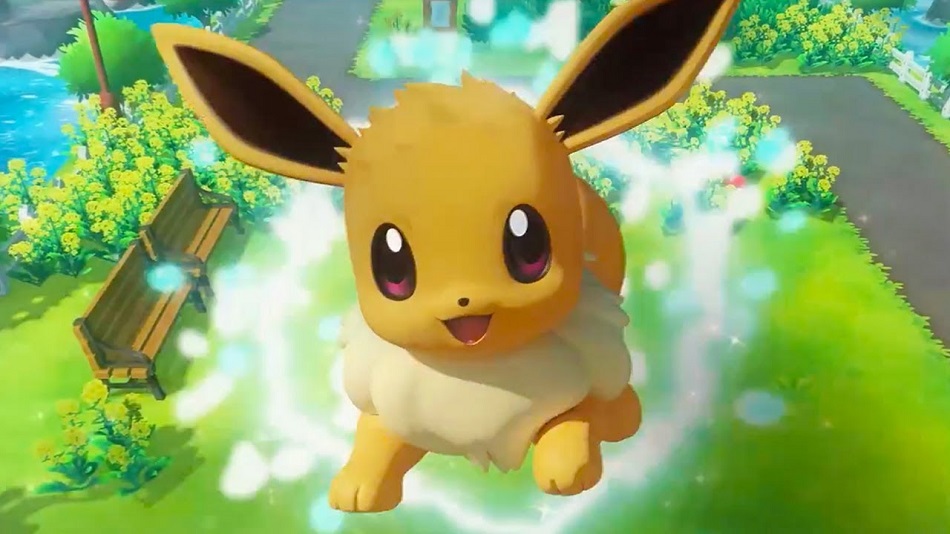 HIGH The presentation is remarkably improved over previous Pokémon titles.

LOW It practically plays itself.

WTF The player can travel by clinging onto Snorlax’s body fat.

Pokémon is probably the most magical franchise in the world. Be it games, movies or merchandise, every product tied to this unstoppable IP is destined to perform well critically, commercially, and most importantly, in everyone’s hearts. This means that Pokémon: Let’s Go Eevee has every advantage possible to please the ever-growing legion of poke-fans. Honestly, though? This title faces an identity crisis and a lack of gameplay.

Pokémon: Let’s Go Eevee is a third-person RPG-Adventure game in which the player controls a slightly customizable, nameable character. Free traversal through cities and routes is possible after the player unlocks them, and along the journey, the player can form their ideal team of Pokémon by catching them in the wild and then training them against other Pokémon Trainers via turn-based battles to eventually become the very best Pokémon Trainer — the Champion of the Pokémon League.

What might not be immediately apparent to some players is that Eevee is meant to be a quasi-remake of 1998’s Yellow, featuring similar settings, storylines and catchable Pokémon. Graphically, it’s a huge improvement. The original Pokémon Yellow looked awful, as Pokémon were unrecognizable and it was hard to tell the difference between a stray cat or the legendary Mewtwo. Eevee’s version is alive and colorful — Pokémon of all sorts roam the region, buildings and cities have successfully transitioned into 3D space, and the facial expressions of the main characters are more animated than ever. (It’s a shame, however, that Pokémon still make garbled sounds as their cries, instead of saying their names like in the anime.)

While the aesthetics are improved, they’re still faithful to the source. However, Eevee’s gameplay is more reminiscent of the mobile phenomenon, Pokémon Go. 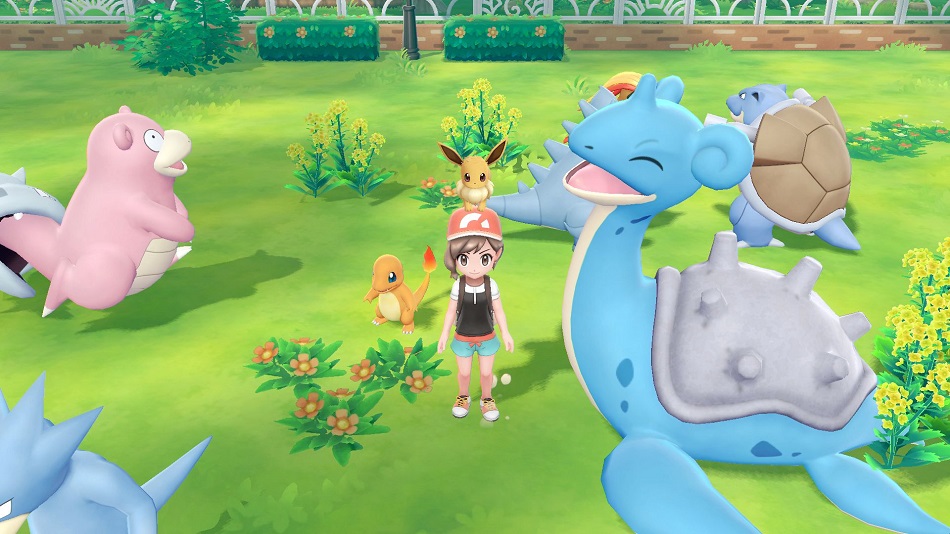 In Go, wild Pokémon can only be caught, not fought, so the only way to grind for experience is to catch a lot of Pokémon instead of battling them. This change doesn’t pay off for Eevee, as throwing Poké Balls at random Pokémon requires no tactics, just throwing my ball at the right moment. More often than not, I felt like success was down to sheer luck. This shift also makes training Pokémon frustrating, as Poké Balls have to be bought from stores. At certain points I would simply not have enough money to buy the Balls necessary to train my Pokémon, while at other times, I would have a near infinite supply.

The biggest innovation Eevee offers might be the ‘inclusion’ (read: forced insertion) of motion controls, limited to the docked version. In this mode, the controls feel inaccurate. The player holds one joycon and moves it vertically to throw a ball. When a Pokémon moves to the side, however, the player has to add more motion to it. Whenever I tried to ‘toss’ my ball in a natural way, the game didn’t respond accordingly.

It’s also worth noting that this installment offers a couch co-op function that makes this already-easy game even more of a cakewalk since a friend can join and deploy a second Pokémon, making every battle 2-on-1. Oddly, this feature lacked an appropriate tutorial and is limited in use — the second player is the opposite gender with the same set of clothes as the first player, and this can only be done in docked mode with a joycon or a Poké Ball Plus, the Let’s Go-exclusive accessory. (Beware, Poké balls will be spent at twice the speed when attempting to capture Pokémon when playing with a friend.)

Another problem is the inconsistent difficulty of Eevee. On one hand, the game isn’t challenging at all — throughout my time with it, I never lost a single battle. On the other hand, it was difficult in the sense that some Pokémon appeared, but when I attempted to catch them, they would dodge or escape no matter what I did — a total waste of my time and resources. The most baffling and disappointing aspect is that the mythical Pokémon Mew is exclusively available from an early point in the game via the purchase of the Poké Ball Plus accessory, lending this an air of pay-to-win. Gotta Catch’em All… With cash. 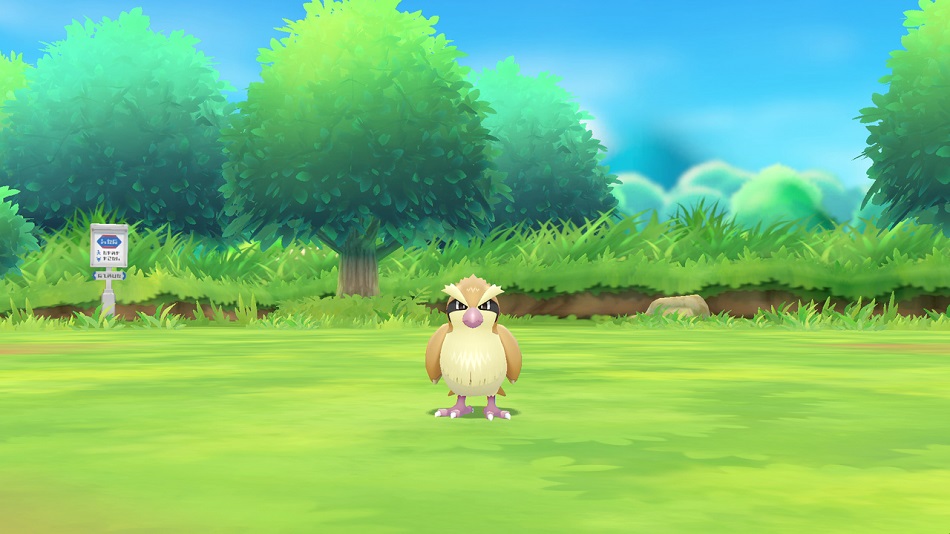 Narratively, the thrills I had with Yellow back in the day are non-existent here. In that game, the player’s rival was a character so disdainful that I always wanted to beat him, no matter the cost. His stand-in is the polar opposite — a friendly competitor who looks up to me and believes that I’m a better trainer than he is. This lighter tone is noticeable everywhere. The basic premise of a Pokémon game is to start as an innocent character and steadily develop into a Trainer badass — the best there is, and the hero that saves the world from foes. It’s never grimdark, but Eevee makes this journey feel diminished in scale and like an effortless, foregone conclusion.

While some might counter criticism of Eevee and give it some slack by saying that kids are its main focus, I disagree. I remember being incredibly happy when I had beaten Pokemon LeafGreen as a kid because it was so challenging for me. With this title, kids are getting a simplistic title that plays itself, and I can only see this as a negative.

While it’s nearly impossible to hate a Pokémon game, Let’s Go Eevee doesn’t rank with the greats. Rather than forging a new path in the current generation, this quasi-remake relies too heavily on the weak gameplay of the mobile hit and lacks both the strategy and motivation to succeed.  Eevee is cute and innocent, but this particular entry has not reached its fully-evolved form. Rating: 4 out of 10

Disclosures: Pokémon: Let’s Go Eevee was developed by Game Freak and published by The Pokémon Company and Nintendo, and is available exclusively on  Nintendo Switch. Approximately 32 hours were devoted to the game and it was completed. There is a co-op mode in which a second player can control a pokemon on the first player’s team.

Parents: Pokémon: Let’s Go Eevee received an E from the ESRB for Mild Cartoon Violence: From the ESRB’s site:‘ This is a role-playing game in which players help a character capture, trade, and train Pokémon. While traveling around various environments, players can engage in turn-based combat with other trainers. Players select various attacks (e.g., fireballs, bites, blasts of energy, slime balls) from a menu to cause damage to other Pokémon; impact sounds and light effects indicate damage/successful hits.

Deaf and Hard of Hearing Gamers: The game heavily relies on dialogue, but it’s all delivered via text and there is no voice acting. Text size is not adjustable, but the speed of the text is. This title is fully accessible. 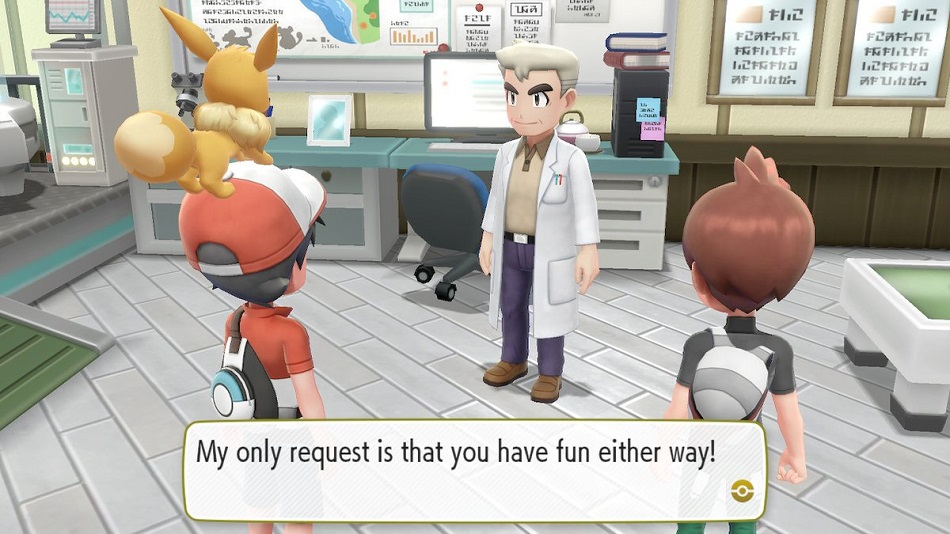 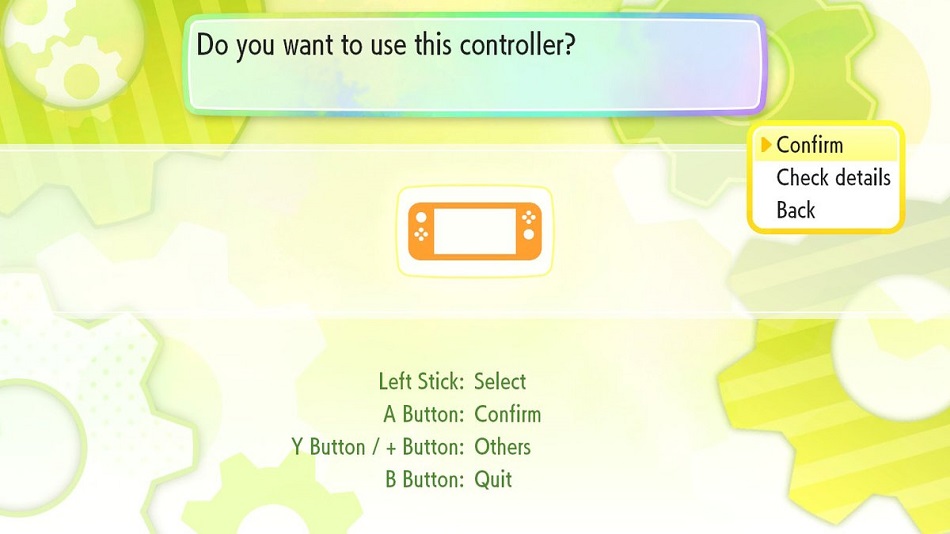