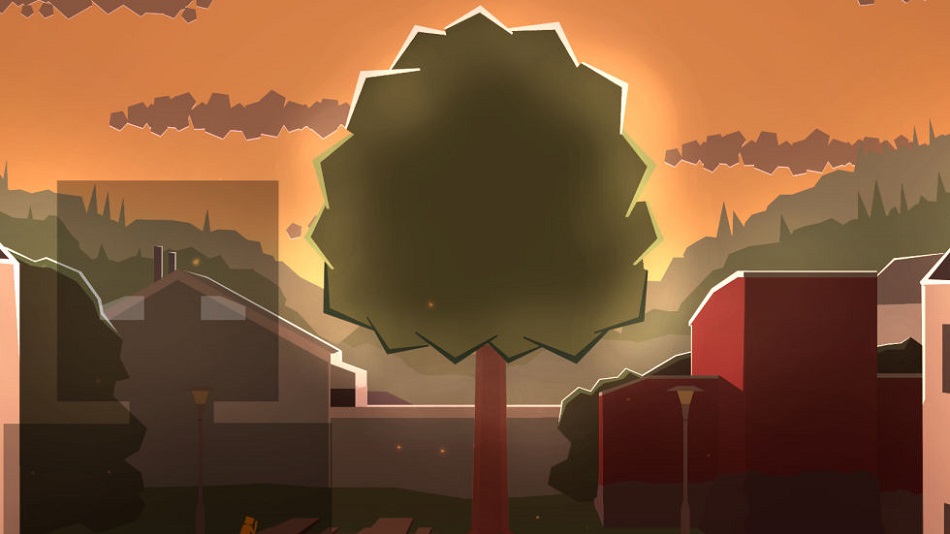 WTF It’s relaxing and sad at the same time.

Please Knock on My Door puts the player in the shoes of an unspecified individual with severe social anxiety and depression.

This story-driven adventure is shown in third person with a mix of overhead and side-on viewpoints, and most of the experience consists of reading dialogue and moving through the main character’s home.

Knock is charming thanks to a realistic, immersive story and gameplay that is a reflection of the player’s choices and morals. However, the main character doesn’t have a clear objective. Instead, the individual (gender isn’t specified) struggles with its job, social connections, family and daily life. The player has just six days until the end of the game, and all commands and choices made will shape their future.

These choices made Please Knock on My Door for me. Just like the main character, I was overthinking every choice I made, which resembled anxiety. If I made the wrong choice, the dialogue would express the character’s thoughts on failure, also letting me know I’d failed as well. By doing so, I felt very connected to the character.

Days start by waking up at 7 AM, and at 7:30 the character has to leave for work. Any later would result in being late and the risk of getting fired. I also had to make sure the character had showered and eaten in the morning, or colleagues at work would notice. 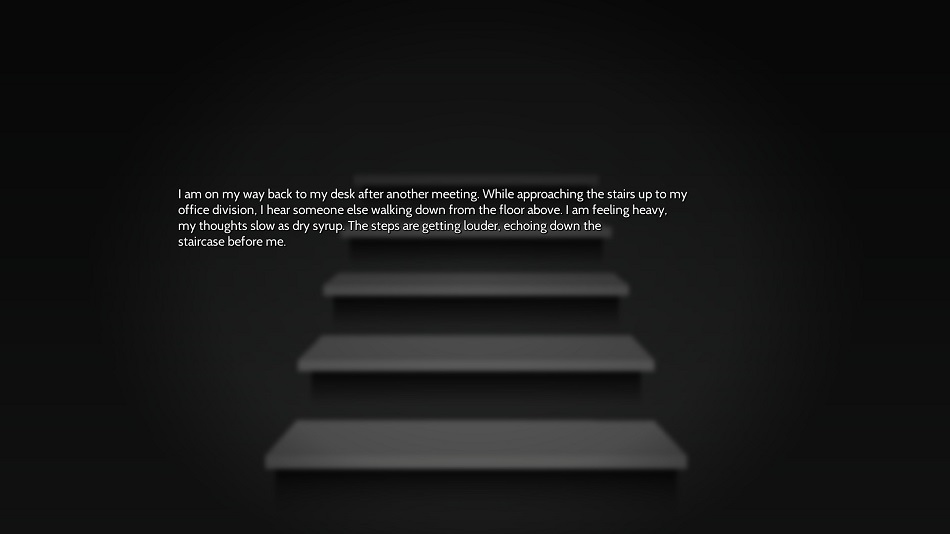 Every workday has a special event with a single choice to make, and these have a serious impact on the character’s mood. While sitting at my desk, I also had the opportunity to explore small notes left by co-workers and the diary of the character. These told me the effects of my choices.

For example, I remember having to choose between fixing my pc at work myself or asking help from a colleague. In this decision, I had to empathize with my character. Normally, I’d ask for help, but what if the colleague would refuse and increase the character’s social anxiety? However, asking for help turned out to be the good option  — it fixed the hardware and developed a bond with the helper. Trying to fix the pc myself would lead to failure at work and a decrease in confidence of the main character.

Free time at home starts in the afternoon. It’s always up to me what the character does, although the game tried to influence my actions with anxious thoughts. These would interrupt a meal or a gaming session and keep the character awake for as long as possible. These interruptions could also affect the character’s sleeping schedule and a hidden mental fortitude score which determines some of the sequences.

In general, I was amazed by the realistic responses of the character to every option that was given, but somewhat disappointed by the general lack of them. For example, I could choose whether I would fill my character’s free time with chatting, watching television or taking an extra nap, each with their own response from the character, mainly consisting of anxious thoughts. At some point, I had gone through all actions multiple times without much difference in the result and more varied options would be welcome additions.

On the sixth day, a knocking on the character’s door is heard. By opening the door, the ultimate ‘result’ of my choices are summed up. I’ve experienced multiple outcomes, both good and bad. While a good sequence of actions would be rewarded with a hopeful ending, a bad sequence might lead to suicide. 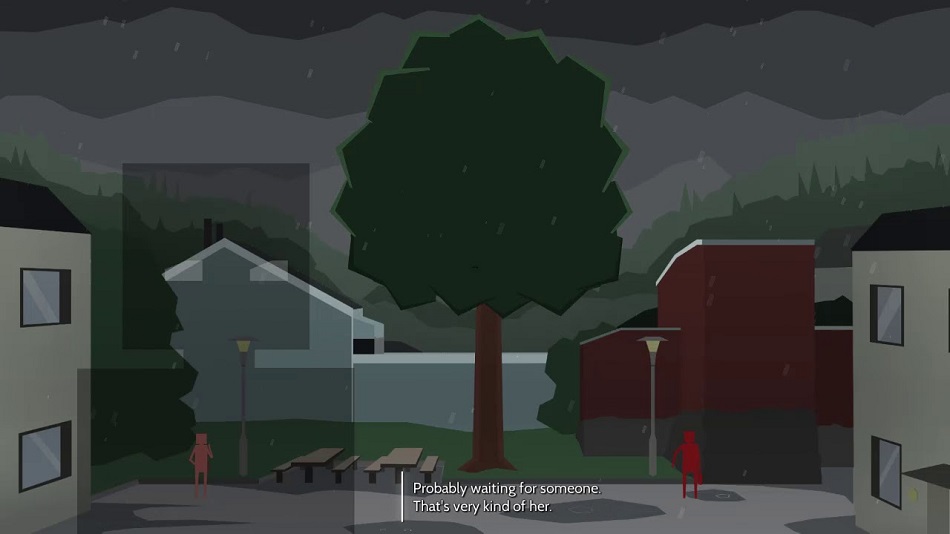 Technically, Please Knock on My Door doesn’t try to be ambitious. The animations are simple, the art style isn’t overly complicated, and the soundtrack, effects and UI are minimal as well. But despite its simplicity, I still felt immersed. The overall emptiness of the aesthetic made me feel the character’s loneliness and struggle.

I have no huge complaints, but I would’ve liked to have seen more indications on how activities like taking a shower or preparing a meal would turn out, and an in-game time indicator would be nice too. I also would have liked more content since a run of the game can be completed in an hour, so length is a possible concern to prospective players.

Aside from these quirks, Please Knock on My Door achieves exactly what it aims for. However, by limiting its own variety of gameplay components, it doesn’t strive to be as extraordinary as it could’ve been. Even though playing through the game was a great experience, I still felt like it had the potential to be even more.

Overall, Please Knock on My Door is a unique, effective experience that raises darker themes of life such as social anxiety and depression. While difficult to discuss in reality, the thoughts and feelings of the character connected. I was motivated to help turn its sad existence into a happier one, and I couldn’t help but empathize – this indie had an effect on me. Rating: 8 out of 10

Disclosures: This game is developed and published by Levall Games AB. It is currently available on PC. This copy of the game was obtained via publisher.  Approximately 3 hours were devoted to the single-player mode, and the game was completed. There are no multiplayer modes.

Parents: There is no ESRB Rating for Please Knock On My Door.

Deaf & Hard of Hearing Gamers: The game is absolutely playable without any sound, as all dialogue is subtitled and all actions are readable. There’s no additional content that requires sound. Subtitles can’t be resized. 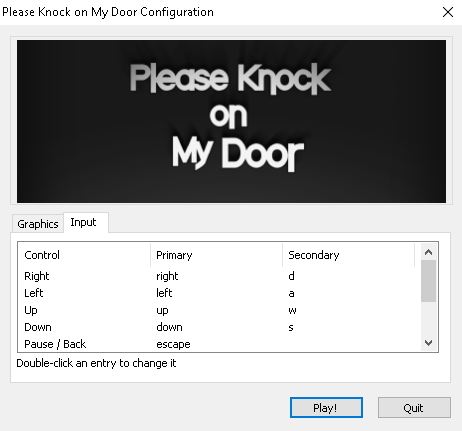 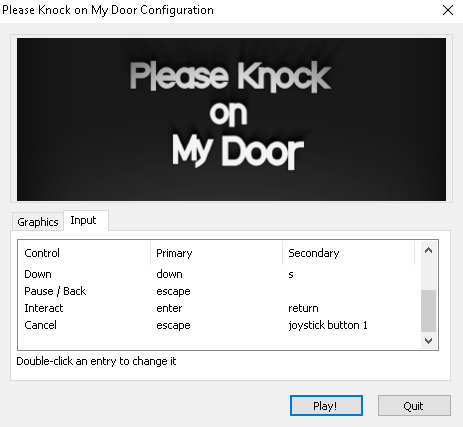