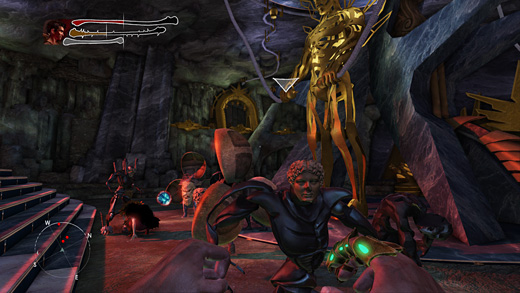 HIGH Giving a humanoid crustacean a piledriver. The wrestling kind.

LOW Getting locked out of certain environments after traversing them.

It's been a while since Ghat first set out on his journey to the End of the World in the original Zeno Clash.

After partnering up with a being known as Golem in order to take revenge on FatherMother for crimes against its offspring (most notably that its offspring originally belonged to other people), Golem selflessly took control of Ghat's home settlement and immediately began stuffing civilization and laws down the throats of the populace.

Jumping ahead, Ghat and his sister aren't entirely impressed with how Golem's moved in and chucked FatherMother in jail for wandering about and kidnapping kids, so they decide that the only recourse is to bust FatherMother out of his cell and put an end to Golem's law enforcing schemes once and for all. Hooray!

It's an unconventional story, to say the least. Then again, nothing in Zeno Clash II

The art style is insane, with most characters only being somewhat humanoid in appearance. A moth-collecting artist comes across as a particular highlight, with the easel resting upon his grotesquely oversized lower jaw and held in place by his teeth poking through it. It's almost a shame Ghat doesn't get to punch him in the face just to let players see how it animates under stress.

The environments are also imaginative. They're often tribal in nature, but also tied down to no overriding logic, leading to some breathtaking scenery that largely defies description. Walking around the Rath-Bird Fields is almost like being on an alien planet, and the view extends for miles around. There's even a day and night cycle thrown in for good measure.

As far as the designers' vision goes, it's like everything was plucked clean out of their minds during an intensely lurid fever dream and pasted straight into the game. So the visuals are all well and good, but how's the gameplay? Entirely okay, thanks for asking. 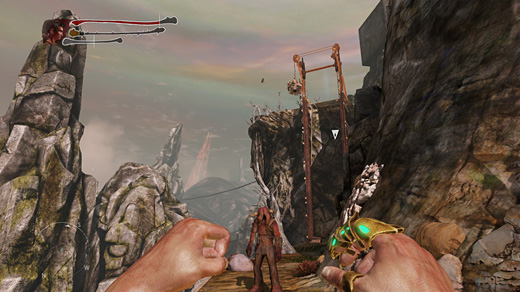 As a first person brawler in the vein of Namco's Breakdown, players are tasked with snapping the bones of their enemies, up close and personally. Short combos are provided, alongside the ability to weave, block, charge up more powerful attacks, or to grab stunned opponents. While there are firearms available from time to time, ammo is extremely limited and can't be counted on for the majority of the campaign.

It's mechanically fine, but the biggest problem with the combat is just how unnecessary much of it is.

It's quite easy to amble through almost the entire game by simply charging power attacks, occasionally grabbing a hammer or rifle whenever they're available and cleaning enemies out that way. Bosses need a little more ingenuity, but for the most part it's all pretty straightforward stuff. Enemies tend to have a lot of variety in their visual design, but almost none in the way they engage with the player. The result is a lot of fairly repetitive battles.

The way Ghat levels up is also a little strange. Beating foes into a fine mist does nothing to improve his abilities—the environments must instead be explored for totem poles which will allow him to tweak different attributes such as health, stamina, strength and the ability to lead other friendlies into battle. If his leadership powers are too low, allies will refuse to join him in his noble quest to bash enemies senseless.

There's also an integrated multiplayer component where players can join up to take on enemies, though I found the solitude of snapping limbs on my lonesome to be the preferable approach. With a friend backing Ghat up it could be quite good fun, but jumping in with a stranger didn't exactly light my fire—especially given that online was a pretty laggy experience.

, like the original, is an interesting game. It falls slightly flat in the gameplay, but it's largely balanced by the world being so damn interesting to experience and wander around in. On the other hand, the combat does grow a mite repetitive before too long, so it really comes down to how players feel about traversing an interesting, alien landscape full of charm and weirdness. It's an experience well worth taking, but also one which needs more variety and polish in order to truly shine. Rating: 7.0 out of 10.


Disclosures: This game was obtained via publisher and reviewed on the PC. Approximately 10 hours of play was devoted to single-player modes (completed one time) and one hour of play in multiplayer modes.

Parents: According to the ESRB, this game contains violence, blood, partial nudity, mild language and use of alcohol. None of which should trouble anyone at all.

Deaf and Hard of Hearing: Subtitles exist and are readily accessible. No problems here.