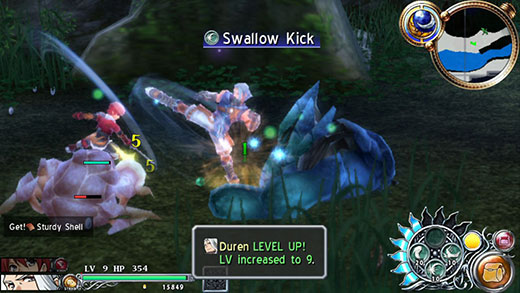 HIGH Mastering the combat engine and watching enemies explode into piles of loot under a blinding storm of attacks.

WTF Some of Adol's dialogue choices are unexpectedly insane.

begins in somewhat traditional JRPG fashion: staggering into the local mining town of Casnan, our red-haired protagonist is barely able to stand and unable to remember so much as his own name. After recovering at an inn overnight, he meets up with someone claiming to be an acquaintance – and moments later is dashing off to a nearby mine after monsters start pouring out of the place. Can our fortuitously-placed amnesiac hero help out in the nick of time? Damn straight he can.

A few storyline events later and it transpires that Adol – for that is revealed to be our hero's name – has recently been rummaging around in the forest doing the old ‘wandering swordsman' routine, but now there are gaping holes where his memories should have been safely tucked away.

As luck would have it, the ruling Empire has decided that it would be in their best interests to chart out the territory, and have brought along a hefty pile of gold to reward successful cartographers. Despite being brought to the brink of death and suffering a leaky brain from his previous attempts to explore the place, it isn't long before Adol's up and raring to go once more. And boy, it sure sounds like a great idea!

Given its legacy as as one of the most venerable JRPG franchises out there, it's easy to imagine Ys as a bog-standard turn-based JRPG in the most classic sense imaginable.

In actuality, it plays a little like a turbocharged Diablo on crack. Most battles fly by in an absolute blur with Adol and his party tearing adversaries apart like a sentient human hurricane, bursting them apart for loot and crafting materials before dashing on to viciously murder the next group of unfortunate beasts. It's a thrilling, high energy battle system which rewards quick reactions and split-second timing. Blocking right before blows land will grant temporary invincibility, whereas dodging at the last moment slows down time – and enemies – for the purpose of bloody retaliation.

What's more, each of the characters who join Adol on his quest have their own types of attacks to help deal with enemies. Adol himself is a master of slashings wipes, Duren beats foes to death with crushing fist-based attacks, and Ozma stabs enemies with the business end of his spear for a piercing approach. Switching between up to three party members is necessary to take down various enemy types, and thankfully it all happens at the touch of a button with no need for menus.  This simple, uncluttered system works perfectly.

On the standard difficulty, average gamers should have no trouble keeping up with the general pace of combat, and there's always the option to simply power-level through adversaries or forge better equipment. For more experienced players on a higher difficulty, learning the nuances of the battle system suddenly becomes more important, but also more rewarding.

One of the great things about Ys: Memories of Celceta is the sense of discovery. It may not be the best-looking game around, but there's a lot to love in the environments. They're not only well designed, but highly varied – one minute Adol's party is hacking through a jungle, and the next they're barreling across a windswept peak in the middle of a snowstorm. This helps keep the adventure fresh throughout, and the tools retrieved from dungeons allow Adol to hack through previously impenetrable undergrowth or to dash up vertical slopes to reach new areas.

The storyline tying everything together is about as generic as they come, mind. Despite some gorgeous artwork and excellent character designs, the 'epic' quest comes with no real surprises. Anyone who's experienced a reasonable number of JRPGs in the past could probably rattle off every event that happens without ever having played it.

That's not to say that the localization is bad, however. Some of the jokes are fairly amusing, especially when Adol is given the chance to act like a complete weirdo when replying in conversations. The characters are a pretty likeable bunch of unrealistically nice chums as well, it's just a shame they weren't given more ways to express themselves within the storyline.

The other slight issue I have is with the final dungeon. JRPGs have long fallen into the trap of overly-complex and lengthy finales with less interesting environments than those that came before them, and Ys: Memories of Celceta

does exactly the same here. While not the worst offender I've seen, it does offer up some halfhearted puzzles that seem designed for no other reason than to drag things out.

That said, it's a minor complaint  when the rest of the game's so good. It's a sharp, punchy adventure filled with great combat, excellent tunes and rollicking good times throughout. Despite the ho-hum storyline and a few minor pacing issues in the endgame, it still comes pretty Ys-ey to recommend overall.

Disclosures: This game was obtained via publisher and reviewed on the Playstation Vita. Approximately 25 hours of play was devoted to single-player modes (completed 1 time) and there are no multiplayer modes.

Parents: According to the ESRB, this game contains fantasy violence, mild blood, mild language and mild suggestive themes. There's very little in here that should raise an eyebrow and is generally good wholesome fun – a few of Adol's weirder selectable dialogue choices aside.

Deaf & Hard of Hearing: Pretty much every story related thing in the game is subtitled or delivered through textual descriptions/dialogue. While certain enemies have audio cues relating to attacks, their omission shouldn't greatly impact play.