That Cataclysm's got it coming. 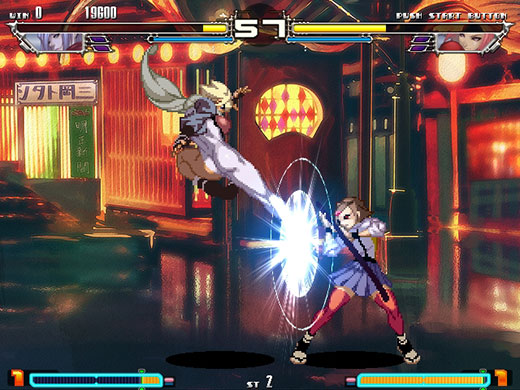 LOW The ramshackle UI—more reminiscent of a game in dev than an official release.

Full disclosure time! Way back around August 2013 or so, I dropped a chunk of money into the Yatagarasu Indiegogo campaign to the tune of five hundred dollars. This is partially because I'm absolutely woeful when it comes to money, but mainly because it looked like a promising project with some neat rewards for backers.  See how Aja Salisbury made it into the roster over her clearly inferior rivals? That's on me, that is. You can all queue up and thank me later.

So what is Yatagarasu all about? At its core it's an old-school fighting game created by several ex-SNK employees. There's none of that fancy HD nonsense to be found here, it's all built on chunky pixels and low resolution assets. It sounds terrible, but it's great for anyone with nostalgia for the days when Street Fighter 2 and Samurai Shodown were in the arcades.

Fortunately, given that it isn't trying to push barriers in innovation or technical production, the core gameplay is absolutely splendid. Feeling like a mix of King of Fighters and Street Fighter: 3rd Strike, there are four standard attack buttons coupled with high and low parries, dashes, guard crushes, overheads… pretty much all the good stuff that contributes to a varied and exciting battle system.

Despite this variety, the game isn't trying to provide endless combos or hyperkinetic fighting. Most of the movement and attacks in Yatagarasu are deliberate, and attack strings never have the recipient helplessly bouncing around for ages waiting for the combo to end. Matches can be over in a flash if one player overwhelms, but there's also plenty of scope for tense back and forthing where a single jab could make all the difference.

It's early days so far, but character balance seems pretty decent. Shotokan style characters may be a little strong given their ease of use compared to the alternatives, and Chada is a terrifying grappler combo of T. Hawk and Zangief who can do ludicrous amounts of damage over low quality connections where opponents can't react, space or combo correctly. But, on the whole, all the characters seem to be entirely viable with no wasted slots—a primary concern of the development team.

There are three new characters in Attack on Cataclysm over older versions, including unconventional ninja Azure who can hurl Geese Howard-style reppukens at opponents, young dancer Kotaro who spends her spare time stabbing dudes for whatever reason, and the aforementioned sword-wielding Aja Salisbury who hails from the UK and fell out of love with the Tories—something that takes most people a whole ten seconds—and promptly decided that it was time to head out on a crusade to reform the world.

As an aside, speaking as someone who voted for her during the Indiegogo campaign, her story seems a bit weird. The translation may be a little off base, but she's been mind controlled by someone else, essentially nullifying her original backstory completely. This unexpected development is sort of like ordering a delicious steak in a restaurant and then getting kicked between the legs by the waiter instead. Kind of.

So what's the bad news? Well, as great as Yatagarasu's core play is, the shell surrounding it is remarkably convoluted. The UI feels almost bolted on rather than integrated, with a bewildering number of options in any given menu and little information as to what some things actually do. There are two separate modes called ‘Arcade', and players can earn some sort of currency by playing the game, but I've no idea what these points are actually used for.

Aside from these issues, the game remains locked at a low resolution with no way to change it. Running it fullscreen merely stretches the image into a faux 16:9 ratio, and is definitely not recommended. That said, the option to double the window size from the launch menu is an entirely adequate compromise.

Those things are disappointing, but the biggest issue is that to connect to online matchmaking correctly, players are expected and required to delve into the guts of their network and open up certain ports used by the game. Not doing so will lead to a bunch of lobbies and potential matches being completely unavailable for players. Experienced PC techies will have no issues, but those not used to this sort of tweaking are going to have to put in effort to get things in order. The good news is that the netcode is rock solid, with options to compensate for lag built into the character select screen and GGPO implementation set to arrive at a later date.

Yatagarasu: Attack on Cataclysm is aimed at the very niche audience who genuinely champion gameplay over graphical achievements, and who aren't afraid of putting in some hard work to get the most out of it. Given its Indiegogo campaign, this game had the potential to become one of the worst cases of buyer's remorse that I've ever had, but it turned out beautifully in the end. Weird PC port quibbles notwithstanding, of course. Rating: 8 out of 10


Disclosures: This game was obtained via a crowdfunding campaign and reviewed on the PC. Approximately 8 hours of play was devoted to single-player modes (completed multiple times) and 5 hours of play in multiplayer modes.

Parents: According to the ESRB, this game contains… well, let's wait for the ESRB to rate it first. It's pretty bloodless, and should easily be appropriate for a teen audience I would expect.

Deaf & Hard of Hearing: Not much to worry about on this front, most of the important audiovisual information can be interpreted through visuals alone.