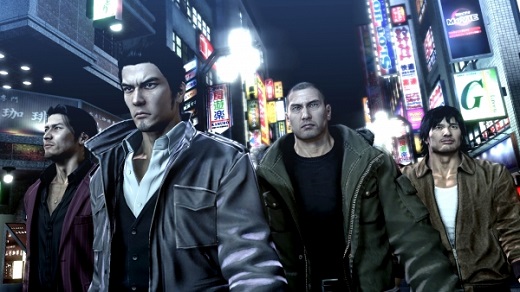 HIGH Some of the action sequences are outstanding. If only more games paid this much attention to their martial arts direction.

LOW There's too much filler in the main story. Oh, and anything to do with "following one's dreams."

WTF The 'Stalker' revelation. Or maybe the one with the snowball.

The Dragon of Dojima has returned for the latest installment of everyone's favorite Kazuma Kiryu simulator! In the past he's battled mobs of armed thugs with his bare hands, punched tigers' lights out, taken on government-sponsored assassins, knocked out pretty much all his friends, got stabbed in the gut with poisoned knives, played baseball, went on dates with hostess girls, sang his heart out at karaoke, bummed around in arcades for hours and given more heartwarming life advice than pretty much anyone else on the face of the planet.

And now he's back for more! Hooray!

As this latest installment begins, it's shown that some time has passed since the ass-kicking, teeth-shattering finale of the fourth Yakuza game, and now main character Kiryu is spending his days driving a taxi around while trying to forget his past and provide for the Sunshine Orphanage. Naturally, this doesn't last for too long before things catch up to him yet again—though in true Yakuza style, it's possible to play the game as a taxi simulator for way more than might be expected. (Or for those who really like the driving, spend hours racing against an unruly gang of street racers, Initial D style.)

See, Yakuza's always allowed for a mindblowing amount of freedom in regards to side activities ranging from the culturally-authentic to the downright absurd. While the main story is generally progressed by committing bone-splintering atrocities to anyone stupid enough to take on Kiryu or his friends, it's possible to spend a ton of time wandering the streets of Japan playing darts, going drinking, or playing fully emulated versions of Virtua Fighter 2.1 in the arcades or whatever.

…And yes, Shun Di's bridge is there in all its rendered glory. Eat that, Saturn version! (It still bloody cheats by reading inputs, mind.)

So, it's fair to say that the series nails the vibe of busy Japanese cities almost perfectly, and then it adds the presence of suicidal punks roaming around thinking that starting fights with the Dragon of Dojima is a good idea before having the business end of a motorbike stuffed down their throats. And it's not just Kiryu whooping ass—there are five playable characters with their own motivations and story segments, four of which fight with their own unique style.

It's granted that the traditional Yakuza fighting mechanics are showing their age a bit, being barely evolved from the earlier iterations and offering boss characters that still have an annoying tendency to ignore player attacks without flinching. But, that's not to say that the action can't be jaw-droppingly spectacular at times. Forget other games where people get cleaved in half or disemboweled—as far as violence is concerned, Yakuza puts them all to shame every time a bone pops out of its socket. There's one move in particular where the civic-minded Kiryu decides to scrub the streets of Kamurocho using his opponent's face as a rag, and it's wince-inducing every single time. It's also thoroughly awesome.

So the scuffles are great, but the story pacing and quality are wildly uneven. Of special note is Haruka's chapter—it becomes punishingly boring after a while. It's not because the rhythm action aspects are terrible, but they're certainly not strong enough to stand up to such an intense overload of repetition. I was practically weeping blood by the end of her segment, praying that I wouldn't bump into yet another freaking dance-off or random event in the street. And don't even bring up Shinada's section. It was such a bizarrely-concocted baseball saga that I'm not entirely convinced I didn't dream the whole thing up.

Still, sagging moments like those don't tarnish the game much overall, even if it does have more filler than I'd like. Although to be fair, a certain amount of this was partially my fault—given my completionist nature, it was hard to skip things like Saejima's hunting expeditions in order to get on with the main storyline, even though they take a little too long for their own good.

So, the point I'm getting to over the last few hundred words is that Yakuza 5 is more Yakuza. Way more, and while the content isn't always the best of the series, it's still damned good for the most part. While every decent moment of pulse-pounding drama may be matched by a dose of piffle where characters stare into the distance and talk about following their dreams, there's no denying that Yakuza still brings the heat. Even after spending seventy hours on this, I'm still definitely up for more. See you next time, Kiryu.  Rating: 7.5 out of 10


Disclosures: This game was obtained via publisher and reviewed on the PS3. Approximately 70 hours of play was devoted to single-player modes (completed 1 time). There are no multiplayer modes.

Parents: The ESRB hasn't rated this, but despite some heartwarming morals being handed out, I'm pretty sure most parents won't want their kids to see some dude having a pen punched through their cheek or having their spine shattered over a bollard. Then there's all the drinking, swearing, crime-related shenanigans and all that good stuff. Keep them away, parents!

Deaf & Hard of Hearing: The whole game is voiced in Japanese and subtitled. For the most part, hearing disabilities shouldn't prevent enjoyment of the game as a whole.

A lot of people consider this one to be the best in the series (or at least besides Y0), but man, the bloat really killed it for me. Glad to see that reflected in this review. For some reason, I’ve been enjoying all the even-numbered games more, so I’m looking forward to Y6.