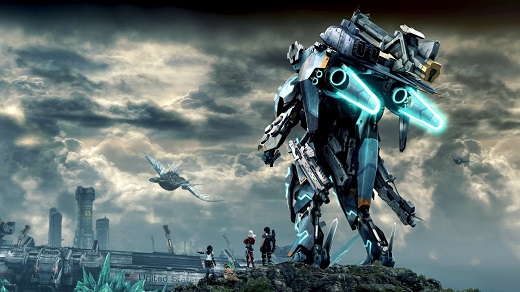 LOW A tie between the main story, the forced grinding, and anything to do with Lin.

WTF The bunny suits are more expensive than a war machine of capable of complete annihilation?

To arms, everyone! It's time to pull out the assault rifles and fend off frothing alien scum because the Earth is in mortal dange… oh.

Scratch that, the Earth is gone.

In Xenoblade Chronicles X, the lovely planet we inhabit is reduced to a bunch of space debris swirling around the galaxy, but fear not—a bunch of ships left Earth during the attack.

Oh, wait… nearly every one of those got blown to bits too?

After a lengthy chase, the last remnants of humanity have landed on a planet called Mira with bloodthirsty aliens in tow. After creating a custom character, it's up to the player to ensure that humankind isn't flushed down the uncaring toilet of history before they've had a chance to explore this exciting world full of things trying to murder them.

The player character and most of his or her chums are part of a group sent off to explore the wilds and plant planet-scanning probes in various tactical locations. It's a satisfying job since Mira's a beautiful world to wander around in, full of breathtaking scenery, weather patterns, night and day cycles, and plenty of wildlife the size of small mountains. It's huge, with tons of sightseeing spots and hidden nooks to discover.

Of course, given that a sizeable portion of the wildlife wants to eat anything human-shaped, Xenoblade's combat is an important element. While decent enough, the fights are not real-time; they rely heavily on positioning and cooldown timers instead of reflexes. It's pretty unobtrusive.

Things get spicier as players unlock the ability to pilot Skells—massive mechanical monstrosities that can be tooled up with a variety of armaments. They also double as transport to hard-to-reach areas. Flying through the skies of Mira is a badass experience.

There's a surprisingly large cast of faces to take on these excursions across Mira, and it's right here that Xenoblade makes its first massive mistake—despite offering a huge roster, it locks players into keeping the same two characters for nearly every story and character mission in the game. Sure, Elma's great and would have made a fine protagonist, but Lin … Jumping Christ on a pogo stick, this thirteen year old genius mechanic summoned from the darkest bowels of Hell singlehandedly ruins the story with the aid of her demon familiar, Tatsu.

For example, Lin finds it hilarious to point out that Tatsu looks like he could be edible. This is a "joke" so amazingly humorous that they shunt it into nearly every conversation the two of them have. Worse, she's so cheerfully optimistic and constantly spouts so much piffle that I spent most of the game hoping she'd get sniped during a cut-scene. The decision to invest heavily in such an awful character damages the narrative tremendously, especially when more interesting choices like Nagi and Murderess are largely ignored.

Xenoblade Chronicles X also stumbles in other areas. A big one is that the grind is real, and the grind is enforced. Spending two hours in the endgame farming the same couple of enemies because the drop rates can be unkind is bad enough, but it's not just materials. There's an affinity system where battling with certain characters for ages and ages and ages will cause their affection for the main character to rise. Many of the better sidequests are locked behind this mechanic, and one of the main quests will come screaming to a halt if a certain optional member called Gwin hasn't been appropriately buttered up. Oh, and to really put the boot in? Every main quest is gated by pointless progression requirements.

Then there's the multiplayer, which should have been amazing, but is very much not. There are cool aspects to it admittedly—friends' avatars can be enlisted into the player's party, there's a social aspect to exploring, and it's possible to party-up in real time to take on mega-bosses known as Global Nemeses. Unfortunately, it's all undercooked.

Players get kicked after every match, and most squad missions generally last about two minutes. The balancing is off, too. One overpowered player can wipe out foes in seconds, leaving everyone else sitting around scratching their backsides. Nearly everything about this multi implementation is bizarre. Why not allow players into another player's world so they can marvel at the scenery together? Or at least have some actual dungeons worth exploring during co-op missions instead of these bite-sized mouthfuls of pointlessness.

There's greatness in Xenoblade Chronicles X, but it's a shame that it's too often buried under terrible writing and awkward design decisions. That said, when standing atop a forgotten mountain in a hulking Skell as the sun sets… well, it's easy to forget those issues temporarily. Despite all my complaints, I still had a hundred and ten hours go by in the blink of an eye. Xenoblade can be a great experience and surprisingly absorbing at times, but its extreme rough edges could easily shear the skin off a rhino. Rating: 7.5 out of 10


Disclosures: This game was obtained via retail store and reviewed on the Wii U. Approximately 110 hours of play was devoted to single-player modes (completed 1 times) and the multiplayer is essentially integrated into the single player for the most part. Several hours were spent in actual multiplayer parties.

Parents: According to the ESRB, this game contains animated blood, language, suggestive themes, use of alcohol and violence. It's pretty safe for the older kids in my opinion.

Deaf & Hard of Hearing: There should be no real issues here. Subtitles are available throughout, combat rarely hinges on audio cues.

I played it quite a lot, enjoyed it but pretty much agree with you, a lot of potential in this game. Love the series though, the 3DS version of Xenoblade Chronicles is a great game =)