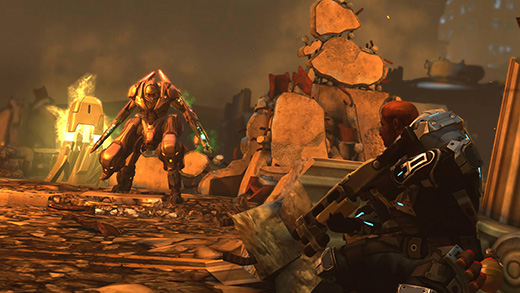 HIGH My Mec unit punching an Exalt scumbag through a wall and halfway down the street.

LOW It all feels a little too familiar despite the changes.

WTF Those engineering lads at Xcom suggested cutting our agents apart just a little bit too quickly for comfort.

isn’t a traditional video game sequel, or even a new chapter in the Xcom saga. It’s an old fashioned expansion pack that adds additional layers of play and new story threads into the original game.

Most of the new features revolve around a substance known as Meld, which—for reasons unknown—the aliens now drop into most missions with a self-destruct timer already activated. It’s effectively a new currency or resource, with Xcom’s finest now having to hightail it over to the canisters and scoop out the contents before they explode. Successfully doing so will lead to new research and augmentation options.

After a few of these Meld containers have been recovered from the field and researched, Xcom’s super-boffins come to the conclusion that ingesting alien DNA or slicing off our soldier’s limbs and stuffing them into mech suits would be a fun way to spend a lazy Sunday afternoon. Strap Johnson down on that table over there and warm up the spinning saw blades, we’re taking this fight back to those Xenomorph scum!

Option one is to use Meld to integrate Xcom agents into massive hulking mechanical constructs of death. Even better, those wacky Xcom engineers have replaced their voice boxes so that they all sound like Autobots as they stomp around the mission grounds punching aliens in the face and vaporizing them with lasers. On an audio and visual level, their inclusion is a real treat. If they pushed out a sequel where entire squads were comprised of these steel monstrosities, I’d buy it in a heartbeat.

As awesome as the Mec suits are, however, when it comes to pure effectiveness they probably lag behind the option to genetically modify the Xcom soldiers instead. Instead of lopping off their limbs, those limbs are instead powered up beyond standard human capabilities. Eyeballs magically become able to spot a fly at ten thousand yards and confer aim and critical bonuses to each shot. Legs are suddenly able to propel agents onto rooftops in a single bound. Hearts inexplicably clone a twin which prevents soldiers from being instantly killed when shot down.

Yes, these are useful options to have—and each limb or organ has two choices associated with it for further customization, revealing themselves as autopsies are completed. Frankly, these enhancements are game-breakingly powerful. A Sniper with double tap, squad sight and armed with a plasma powered sniper rifle was already a force to be reckoned with in the original version of Xcom. Adding the ability for them to literally turn invisible while rushing around the map is arguably unbalanced—but great fun regardless.

Naturally, there are a couple of new alien types to deal with too—but only a couple. The flying squidlike Stalker stealths its way over to isolated units and starts strangling them.  This is usually ineffective as they tend to immediately get blasted to hell by any surrounding operatives in the area. Sectopods are a significantly more vicious threat, essentially an alien counterpoint to Xcom’s Mec units. They take a ton of damage, can fire twice in one turn and are a significant obstacle for unprepared squads.

It’s not just alien incursions that Xcom has to worry about these days though—the new Exalt faction likes to throw a wrench in the works any time they get the chance. A rogue paramilitary group of fairly misguided humans, they’re after whatever secrets and technology the aliens have to offer and will cheerfully undermine Xcom’s war efforts if left unmolested for any length of time.

To counter this new enemy, scanning the globe for Exalt cells is an important task which must be carried out from time to time lest the filthy, exploitative jerkfaces start stealing Xcom’s funding, destroying their research or actively spreading panic throughout any countries funding the Xcom project. Once discovered, undercover operatives must be dispatched from the squad to infiltrate their ranks and, after a period of time has elapsed, extracted with whatever data they can find.

Having this additional layer of espionage underpinning the core gameplay sounds great in theory, but the Exalt missions are way too simple. They usually involve either a ‘King of the Hill’ style objective where enemies must be kept from tapping into communications arrays—set up early and it’s easy to pick them off as they rush in like idiots—or keeping the undercover agent safe as they make their way back to the ship. Also, their storyline doesn’t really have a satisfying conclusion, barely even dipping into what their ideologies or reasoning could be.

That’s where this expansion loses a certain amount of lustre—while these additions are undeniably neat, they’re not enough to significantly evolve the base Xcom experience beyond its original outing. Core gameplay quibbles remain, like alien reprobates getting a free and completely unearned turn on their discovery to better reposition themselves. Some shots can still pass through solid objects to hit their target at impossible trajectories, and free-aiming explosives can be tricky in certain situations. It’s a shame that the core play hasn’t been tweaked for the better, because it’s still a damn fine game—just one with some unfortunate issues holding it back.

is a decent expansion to a slightly flawed original. There are interesting ideas in there, but neither the Exalt faction nor the new units shake things up enough, and many of the niggling irritations from the original release are still present and accounted for. That being said, more Xcom is definitely a good thing, even if it doesn’t shave off all the rough edges quite yet.  It may not be an essential purchase for those who’ve already gone through the game unless the sound of giant hulking mechs really appeals—and it should—but for new players or those curious as to what the series has to offer it’s undoubtedly the best way to play. Rating 6.5 out of 10

Parents: According to the ESRB, this game contains blood and gore, strong language and violence. It's comparatively light on bloodshed compared to many M rated titles however, so a strong stomach isn't really a requirement for play.

Deaf & Hard of Hearing: While aliens can be heard poking around out of sight, visual aids essentially provide the same function. In short, it should be easy enough to play without sound.

and my brain had already figured out who was going to appear at the top in the half-second it took to scroll up and check……Bagatel!