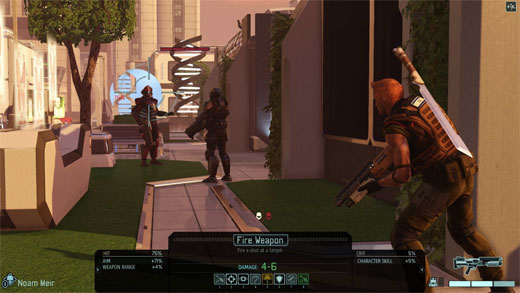 HIGH Dashing across the map to chop up alien scumbags with the Ranger's Reaper ability.

LOW The current PC build is a technical horror show.

WTF My entire squad missing every shot during a perfectly-planned ambush.

It's nice when a developer provides a personalized experience in their games. For example, XCOM 2 is clearly based on the results of my Classic Ironman run from the first XCOM—everyone got their asses handed to them in short order and the Earth ended up under alien control. Of course, it's tough to keep a good (read: awful) commander down, and it's not long before the new, significantly diminished XCOM project is up and running again. Second time's the charm!

Based on this beginning premise, things have changed somewhat on Earth. A peacekeeping force known as Advent now rules mankind. Benevolent on the surface, there are shady goings-on behind the scenes. If humanity doesn't want to get rendered into DNA-flavored goo, they need to strike back at the alien occupiers by setting up a guerrilla network across the globe that can wreck their colonization plans with the aid of a flying mobile base of operations, the Avenger.

The Avenger takes the place of the standard home base from Enemy Unknown, but most of its capabilities are similar. When not in active combat, the war effort has to be bolstered through weapons, research and technology production to give troops on the ground a fighting chance. Most of the upgrades are disappointingly similar to those in the previous game, but there's a ton of snazzy customization options so soldiers can be visually distinct and easily recognizable on the field.

As for gameplay, it's business as usual, although the skills in each class have been given an overhaul, with the Ranger being my favorite—they might as well have been called Ninjas given that they now carry swords around for up-close-and-personal conflict resolution. Support class members are now Specialists, and carry nifty little drones to crack encryptions, steal resources and hijack mechanical foes from a safe distance. Firaxis did a good job in shaking up the classes without changing them beyond recognition.

Something else that's new is the ability to scout. Enemies can often be caught unaware of troop insertion during missions, allowing the chance to set ambushes. This concealment expires the moment a shot is fired or if someone gets discovered, but it does aid in wiping out some bad guys before they have a chance to get ready. It's satisfying to kick off a massacre by having someone run in and chop enemies with a sword before gunning the alien scumbags down as they try to flee.

These changes are solid, but that's not to say XCOM 2 is superior to its predecessor since many of my previous issues have carried over, and some new things are worse.

I'm sad to see that opponents still get a free and completely unwarranted opportunity to flee for cover upon being discovered, and the percentage indicators displaying the likelihood of hitting a target still feel like they're plucked from the air at random. I was incredibly sick of these misleading percentages by the time I finished XCOM: Enemy Unknown, and I could feel my teeth grinding themselves into dust every time I missed a high probability shot in XCOM 2.

There was one memorable instance when I set up an ambush against an enemy in an open field with the whole squad on overwatch, only to see the useless buggers miss every single shot in super-slow motion. The punchline to this particular joke was watching one of my veterans get his head blown off at the start of the next turn. Tactics, schmactics.

What's worse still is that many of the missions feel too similar to one another. Drop in, hunt aliens through the fog of war, duke it out and extract. Nothing seems to shake it up after a certain point— enemies get more health, armor, and even some new abilities, but the tactics required remain the same. Player equipment also plateaus way too early, and these factors meant that extended play sessions felt like grinding through samey encounters.

It's also worth noting that many of the missions are now on a timer. I didn't mind this much overall, but it does remove some of the tactical decision-making. Time limits can be harsh, and hoofing it across the map in order to make it to objectives in time leads to less-than-desirable combat situations.

While XCOM 2 is a PC exclusive right now, I'm not sure why. Initial reports of earth-shattering changes to the controls are shown to be nonsense—it handled fine on consoles before, and the sequel remains similar in execution. I've also heard it was exclusive so as to be more welcoming to the mod community… Maybe Firaxis hopes fans will provide fixes and add some much-needed variety to their work before they release it on console?

Whatever the real reason for PC exclusivity was, it certainly had nothing to do with ensuring smooth performance. Playing at launch, the experience has been embarrassingly bad from a technical standpoint —the campaign's full of glitches, stutters and annoying little bugs. Things frequently pause after enemy turns or moments before events occur, my cursor often disappears after switching elevations, the Geoscape map screen runs at about fifteen frames per second (or less!) and several important indicators wouldn't show up correctly—being unable to see where I need to evacuate from, for example, gave the aliens a wholly unfair advantage beyond their technological supremacy.

To be perfectly blunt, XCOM 2 is a pretty bad experience right now, and the best advice I can give is simple: wait for upcoming patches to fix things before buying. There's a much better game hidden somewhere beneath the performance issues and gameplay flaws, and it's a shame. With a few minor tweaks to the formula, I'd probably be singing a happier tune. As it stands, it's just too buggy, too repetitive and too damned random to deliver the experience it should. Rating: 4.5 out of 10


Disclosures: This game was obtained via digital download and reviewed on the PC. Approximately 35 hours of play was devoted to single-player modes (completed 1 times) and 1 hour of play in multiplayer modes.

Parents: According to the ESRB, this game contains blood, use of tobacco and violence. Those pesky aliens have done some nasty stuff to humanity, but I'm pretty sure teens can handle it.

Deaf & Hard of Hearing: No problems here—subtitles are available, and plenty of tags pop up to show soldiers' declining mental states or whatever.

Colorblind modes: There are not colorblind modes available in the options. A short look online reveals that there have been complaints from players attempting to differentiate between the deep red and black used in the health bars.