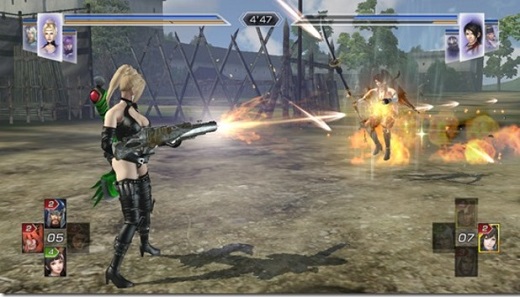 HIGH Rachel, Sterk and Zhurong all playable in the same game? Do not wake me from this beautiful dream.

WTF For a game about slaughtering thousands upon thousands of faceless peons, it's surprisingly light hearted.

Warriors Orochi 3 is here, and it should be familiar to anyone who's played Omega Force's Dynasty Warriors or Samurai Warriors series—not surprising given that the entire game is essentially an excuse to draw the cast of both together for an almighty rumble.

Players take control of three heroes at a time, swapping between them at will, and are faced with hundreds upon hundreds of enemy troops out for blood. Most of these enemies are little more than near-useless grunts and really don't matter except on the hardest difficulty. No, they're essentially fodder, so destroying them to gain items, power ups and to generally feel like a rampaging god of war tearing across the battlefield is the order of the day.

As such, the real meat to be found in each battle involves wiping out enemy officers. When these much deadlier enemies come into conflict with the player's army, losses begin to occur. Much of the strategic element revolves around ensuring that key units don't get wiped out by these guys, though the game constantly throws new objectives into the mix—things like opening up pathways so that the allied armies can advance, or defending idiotic villagers caught up in a battle.

One gripe is that battles will occasionally require very specific critical tasks to be completed, and it's possible to be caught completely off guard when they pop up—demanding that I capture an enemy lieutenant attempting to flee the area whilst I was stuck on the other side of the map completely, for example. Ugh.

Once battles are complete, a quick trip back to the home base (located inside a volcano, apparently) is the order of the day. Once there, the player can kick back and forge bonds with allies or visit the blacksmith to forge new weapons to smash demons with. There are a lot of options for enhancing characters in Warriors Orochi 3, including the ability to equip special items that bolster statistics, or to ‘prestige' characters up to nine times for additional bonuses.

The Musou Battlefield mode outside of the campaign is interesting, allowing players to edit battles in various ways such as dialogue displayed, enemies encountered and other variables such as enemy health or aggressiveness. After an hour of tinkering, I'd concocted an epic tale of how our noble heroes ignored a bunch of starving peasants to bunk off and go sunbathing instead, murdering all the demons in their path before they grabbed all the beach chairs.

Sadly, I couldn't find a way to hook up a USB keyboard to facilitate text entry, and the onscreen one provided is woefully inadequate for the task. What should have taken about five minutes took around half an hour instead, which does limit its appeal.

The other style of note is Gauntlet Mode, which involves heading down into unexplored maps to purify portals. There's an evil miasma rolling across each battlefield which strengthens enemy troops as it thickens and swells, so keeping it at manageable levels whilst looking for the exit, kicking open treasure chests and earning crafting materials is the order of the day. There's an insane amount of foes swarming around in this mode, and even my main character Rachel (who I'd leveled up a thousand times during the main story!) wasn't safe from harm when things got hectic.

Graphically speaking, it's pretty average. In fact, I wouldn't even mention the visuals aside from the fact that as soon as anything happens on the PS4 version, the framerate immediately dips from around 60FPS right down to 30, and has a fair amount of pop-in, as well—enemy fighters teleport into the fight mere yards away from the player. It's disappointing to see these technical shortcomings following the PC Dynasty Warriors 8 XL release which ran at a rock solid 60FPS throughout, and there's no way in hell that the PS4 is incapable of providing a similar experience.

Warriors Orochi 3 isn't likely to change anyone's mind about Omega Force's flagship series, but it's undoubtedly a fan-pleaser of the highest caliber, and an excellent entry point for those who might be curious about the Warriors series. The technical issues may dull its sheen, but there's a hell of a lot of game to get stuck into here, and it's unlikely that I'll be stopping any time soon—not with so many characters to level up and legendary weapons to uncover. Rating: 8 out of 10.


Disclosures: This game was obtained via publisher and reviewed on the PS4. Approximately 55 hours of play was devoted to single-player modes (completed 1 time) and 0 hours of play in multiplayer modes. Nobody was available for online play during testing.

Parents: According to the ESRB, this game contains: mild language, suggestive themes, use of alcohol and tobacco, and violence. Honestly though, there's no blood and very little to be concerned about if younger players fancy annihilating entire armies singlehandedly.

Deaf & Hard of Hearing: The whole games is spoken in Japanese and subtitled in English. Very few things happen on the battlefield that don't also have visual indicators—in short, it's very easy to play and understand even without audio.