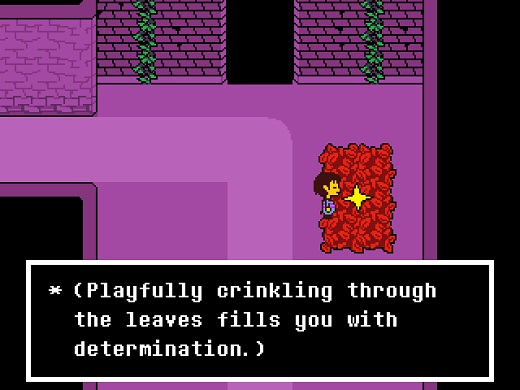 LOW Some random encounters become a bit too repetitive.

WTF So, that's the cultural milestone of humankind as far as monsters are concerned?

I should preface this review by saying it right out of the gate: anyone who's just interested in knowing whether Undertale is worth buying should stop reading now and buy it. It's certainly worth the price of admission, and while I'm trying to keep spoilers to a minimum in this review, going into the game cold is undoubtedly the best way to approach it.

Undertale is primarily a retro-styled role-playing game which looks like it would be right at home on the Super Nintendo. As it begins, the player's character goes tumbling down a massive hole at the top of a mountain. Below waits some sort of underworld where monsters have been sealed away for a long, long time following a war with humanity.

The combat is interesting, resembling a bullet-hell shooter in some ways. Or, sometimes it's a rhythm action game. During encounters, the main character transforms into a heart in an enclosed arena, and enemies attempt to murder the heart with whatever they can throw at it. Not just bullets either—pretty much any pattern or object in the game might get hurled at the player. There are many twists besides what I've mentioned, and it all adds up to a unique take on what are traditionally fairly hands-off turn based battle systems. It works incredibly well.

An even more intriguing spin to the combat is that in Undertale, nobody has to die. Nobody. Even the lowliest random encounter involves creatures that can be convinced not to fight, or they might be spared at appropriate moments. Given how lovely, amusing and charming they all seem, it would take a thoroughly hardened bastard to start cutting them all down wantonly—there's a reason that heading down the killing path is named the 'Genocide Run', and it's not pretty.

The one problem with being nonviolent, though? When sparing enemies, most areas only have a couple of variations on being merciful and there are usually quite a few random encounters to be gotten through. I felt like I had to encounter the same enemies and dodge the same attacks a little too often.

While the combat is definitely interesting, what really makes Undertale so noteworthy is the story itself. There's a ton of player agency in how things progress, with vastly different outcomes depending on the path chosen. It basically boils down to how the main character interacts with monsters along his or her gender-ambiguous journey—either befriending them, or wiping them off the face of the planet. Heading down one path, the protagonist is nothing less than a peerless saint. Going down the other, they're nestled somewhere on the humanity scale between Adolf Hitler and the Emperor from Star Wars. It's a morality system with real punch to it, and nothing like the standard video game approach that asks players to arbitrarily choose whether to hurl an enemy out of a window or hand him a packet of cookies after slaughtering hundreds of his underlings along the way.

Undertale isn't perfect, mind. The pacing's a bit uneven, with some obvious slack moments scattered throughout. Many of the puzzles aren't particularly fulfilling, and repeat enemy encounters feel intrusive to the flow of the narrative. Some of the jokes are stretched too thin, and certain sentiments are laid on too thickly—it led to many eye rolling moments during the otherwise standout finale.

Quibbles aside, Undertale offers a great story with excellent dialogue, a truly fantastic soundtrack and tons of unique, clever, and occasionally demented twists on RPG genre tropes that aren't just window dressing or subtle winking nudges to the player. It's not a perfect game, but it is a great one. Rating: 8 out of 10


Disclosures: This game was obtained via paid download and reviewed on the PC. Approximately 12 hours of play was devoted to single-player modes (completed 1 time) and there are no multiplayer modes.

Parents: According to the ESRB, this game… yeah, it hasn't been rated. I'd guess a teen audience could enjoy this game just fine. Heartwarming morals, a dose of healthy sarcasm and the potential for complete and utter genocide should appeal to those young ragamuffins.

Deaf & Hard of Hearing: All speech is delivered through use of text, and I can't recall encountering any moments that would be impacted by an inability to hear audio prompts.