It's one hellish boss fight. 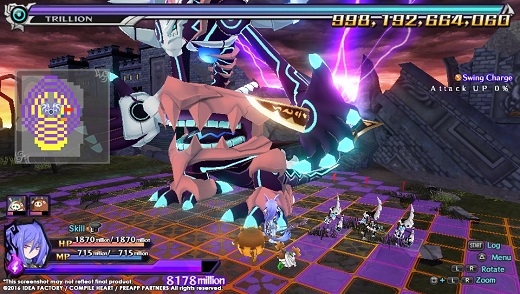 HIGH Figuring out how to lay down massive damage against Trillion.

LOW Repeating it for the entirety of the game with little variation.

Boss fights are tricky things to get right, so it's a gutsy move when an extended boss fight is essentially the entire purpose of a title's existence. Oh sure, other enemies get involved, but the hook here is wiping the eponymous Trillion off the face of the universe before it devours the entire Underworld.

Spoiler: He's called Trillion because that's how many hit points he has.

How it works is that Trillion is asleep for most of the game, and during this time, players have to train their chosen Overlord and go on dates to get their affection up. Experience earned in training sessions can be used to purchase passive upgrades or active attack skills, whilst the affection points allow them to take more of a beating in battle or use more magic.

Battles are undertaken on a grid-based field, with Trillion's attacks clearly telegraphed in advance. If players are on a square when it turns red and don't move out of the way sharpish, they're going to get clobbered by a fist the size of a house. This approach—and indeed, the overall visual style and sense of humor—shares certain concepts with strategy games like Disgaea. It's not too surprising, really, given how Trillion's developers include a number of ex-NIS employees.

Outside of life-or-death situations, there's a fair amount of getting to know the selected Overlord through small cut-scenes. Their personalities may be slightly one dimensional given that they're modeled on the seven deadly sins (Greed, Gluttony and all the rest) but they're a pretty likeable bunch overall. The sole exception is Ruche, who's absolutely horrible. Take the worst, most stererotypical tsundere attitude ever and crank it up to the point where human minds can't handle it without begging to keel over and die. That's Ruche in a nutshell.

While Trillion largely plays character interactions for the lulz, this isn't the case when an Overlord inevitably bites the big one going up against the big boss. In most games I'd cheerfully lick gore off the screen and impatiently check my watch when someone ‘emotionally important' to the rest of the cast pops it. Not so here—spending hours getting to know a character and then watching them die gruesomely in an extended, excessive manner is harrowing stuff that could probably bring a tear to someone with two glass eyeballs and their tear ducts surgically removed.

So far, so good, but repetition is a real issue with Trillion. The first time an Overlord cycle runs its course, everything is still reasonably fresh and enjoyable. As soon as the second Overlord takes a crack at Trillion, some of the game's problems start to show—players will be doing the same basic routine all over again, with a slightly stronger character who inherits some experience. Oddly, this includes re-watching many of the same interactions and events, and while the next Overlord reacts to those sequences with her own thoughts and personality quirks, it isn't enough to make them feel fresh the second (or third) time around.

Furthermore, the battle controls are as weird as hell. Walking diagonally is a nightmare until it becomes apparent that players are supposed to use the shoulder buttons to line up the correct angle. The left stick isn't used to move, it's a shortcut to the skills menu. And to change the viewpoint? Hold down multiple buttons and cycle through the three available. It's possible to get used to it, but it's a lot of fuss to get through—I even had an Overlord die by accidentally walking one space too far while trying to move somewhere else entirely.

I do like what Trillion's going for, and in the early stages I enjoyed my time with it. However, the grind over the lifespans of several Overlords grows dull, and no amount of amusing writing can stave off the boredom that settles in. When it's good, it's very good, but when it wears out its welcome, that welcome wears out hard. Rating: 6.0 out of 10

Disclosures: This game was obtained via publisher and reviewed on the Vita.

Approximately 40 hours of play were devoted to the single-player mode, and the game was completed. There are no multiplayer modes.

Parents: According to the ESRB, this game contains fantasy violence, language, mild blood, partial nudity, sexual themes and use of alcohol and tobacco. It's sanitized demonic activity for the most part, with a lot of comical overtones. Those death scenes though. Ouch.

Deaf & Hard of Hearing: As it's turn based, there's not a lot of need for audio cues to provide gameplay benefits—the hard of hearing should be fine with this game.

Remappable Controls: No, this game's controls are not remappable.