Out for a limb 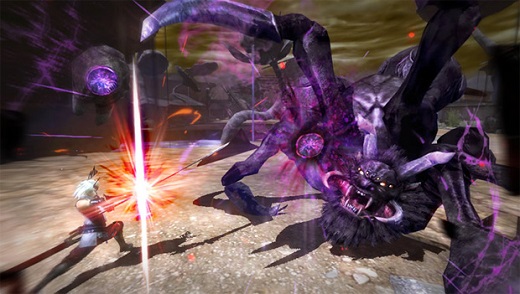 LOW As good as the combat is, it eventually grows stale through repetition.

WTF I need a tail from this Oni. Now that it’s dead, I can’t chop it off.

A group of demons known as the Oni have invaded Earth, pushing humanity to the brink of extinction, and only a dedicated group of hunters (known as Slayers) can stand in their way. It’s up to the player to take the fight back to them before the few remaining strongholds fall to this threat. The way to do this? Why, destroy some bosses whenever they rear their ugly snouts, of course.

During these boss fights, targeting certain limbs can result in their eventual removal at which point they can be ‘purified’—a technique which both collects the limb for future use in creating better equipment, and prevents the Oni from regrowing the missing mandible or whatever it was that got sliced off.

Omega Force undoubtedly missed a trick here, however. Missing demon limbs are instantly replaced by a weaker spectral version, so tactically removing their legs or arms doesn’t really change the fight up much. They may stumble when they charge without the original full strength appendage still attached, but that’s about as far as it goes.

In single player mode, AI squadmates can be recruited so playing solo doesn’t necessarily mean going it alone. They’re more than capable of holding their own for the most part, usually getting downed only by the strongest of Oni—and they can be revived, so it’s not usually a huge deal. The only real complaint that can be levelled their way is that they’re way more into murdering demons than harvesting the bits and pieces. It’s possible for a boss to sprout hidden limbs in the closing stages of a battle, but these bloodthirsty maniacs will often polish it off before it’s possible to harvest them for the future creation of weapons.

Speaking of weapons, there are six varieties to choose from ranging from a standard longsword to a massive pair of oversized gauntlets that can crush bone and armour alike. They all have subtle nuances that aren’t immediately obvious—initially the chain and sickle seemed too slow to be of use for anything other than keeping enemies at range, but I soon figured out that I was simply using it wrong. Once I got the hang of it, hitting the ground became almost optional during battle as I’d reel my Slayer into enemies, hack their flesh apart as I sailed past, then twist around in midair and pull myself straight back at them. Superb.

Like most games in the hunting genre, Toukiden encourages Slayers to team up with their friends. Sadly, the online implementation is damn near dreadful. Missions are inexplicably restricted by whoever in the group has made the least progress, so finding anyone doing the later missions can take a while. Communication also has its own issues due to an inadequate messaging system which relies entirely on preset selections. For example, there’s no way to ask other players whether they’re happy to wait for more Slayers to arrive, or if they’d prefer AI partners to cover the gaps if they’re in a rush to get going.

While this might sound great so far, the main thing dragging down Toukiden overall is, unfortunately, a pretty big one—there’s a notable lack of variety to be found throughout its run time.

While the bosses have their own individual attacks it’s very easy to approach them in much the same way each time, simply getting stuck in and dodging like a lunatic when the need arises. Formulating individual strategies for each Oni is rarely important, and the various phases to be found within each fight usually don’t really shake encounters up much. One later boss grows a pair of wings midway through the battle, for instance, but then proceeds to use the exact same attack patterns as before while flapping around a few metres off the ground.

As for the common genre trick of turning enemies a different colour, buffing their health and giving them a new name? Come on. It strains credibility to class these abominations as a ‘unique’ encounter. There’s nothing like the Jhen Mohran boss fight from Monster Hunter changing things up on a large scale, nor the same level of homestead amenities to develop during downtime back at the village. It’s all about combat when it comes to Toukiden—high quality combat, to be fair, but combat that eventually becomes quite samey.

Despite the repetition, Toukiden’s still a very solid game, and one I’ve had a lot of fun with. Great artwork, solid gameplay and a surprisingly excellent cast of characters did wonders for inviting me into its world, and the fact that I put over eighty hours in over just a couple of weeks is clearly nothing to sneeze at. However, it’s not a Monster Hunter competitor. It simply doesn’t have the variety or those special ‘holy crap’ moments to compete with Capcom’s original behemoth anywhere except the combat engine, and the game suffers for it. That said, I’m on board with Toukiden as a franchise—I just hope Omega Force are savvy enough to hammer out its weaknesses rather than simply doubling down on its strengths going forward. Rating: 7.5 out of 10.

Parents: According to the ESRB, this game contains: alcohol reference, blood and gore, mild suggestive themes and violence. There's not a great deal to worry about for younger players as the combat is pretty sanitized.

Deaf & Hard of Hearing: Nothing really to worry about here. The dialogue is all subtitled from its native Japanese and few encounters rely on audio cues—though players may need to keep the camera pointed at the bosses more often to prevent getting sideswiped by an attack they can’t hear coming.