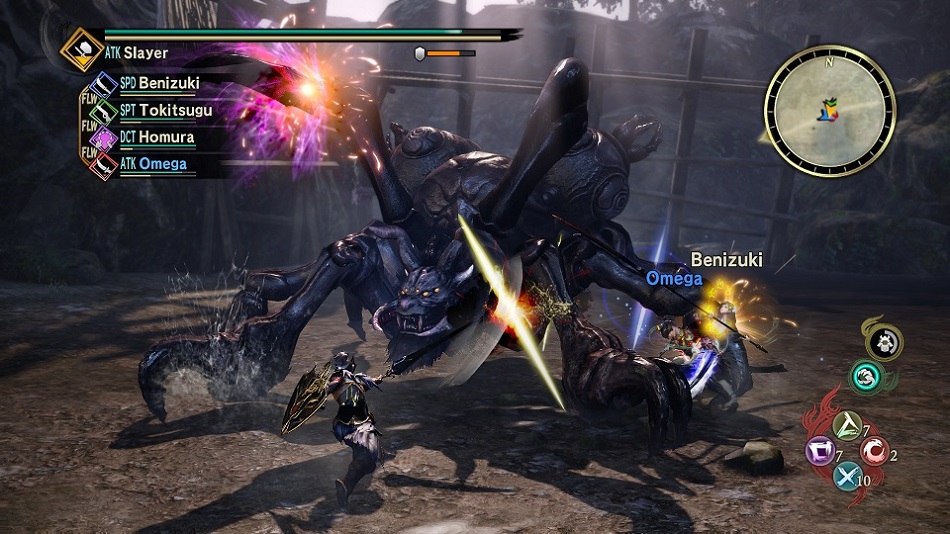 HIGH Locking a boss in place and shredding it to bits with the chain whip.

WTF Double amnesia? At least they poke fun at it…

I enjoyed the original Toukiden, but wound up getting seriously burnt out on it by the time the Platinum trophy indicator popped up. It offered a cool cast and an interesting take on Capcom’s Monster Hunter franchise, but it eventually undermined itself through sheer repetition. As a result, I was initially wary of Toukiden 2 since it seemed to promise more of the same, apart from a few more bosses and maybe some new armor to waddle around in.

Fortunately, I was wrong. It turns out that Toukiden 2‘s actually an awesome addition to the franchise and improves upon the original in smart ways that give the hunting genre a much-needed shakeup.

Toukiden 2 begins as mankind is getting its collective ass handed to it by the evil Oni. It isn’t long before our hero winds up getting pulled through a wormhole which dumps them ten years into the future, erasing their memories along the way and landing them in a new village under constant siege and buckling under internal pressure. Can one amnesiac superhero unite the villagers against the demonic threat and save everyone from complete annihilation?

Yeah, probably. That’s generally how these scenarios go, especially given that said time-traveling protagonist is damn handy with an assortment of weapons that can shuck the limbs clean off any monster dumb enough to get in his (or her) way. They’re also joined by a more-than-capable cast that excel in numerous fields – fellow Slayers on the front lines and craftsmen that can use any salvaged parts to upgrade the player’s equipment.

Fortunately for all involved, the local professor has invented a device known as the Demon Hand – an absurdly useful MacGuffin which allows Slayers a host of new options such as permanently smashing the limbs off enemies, acting as a grappling hook, or closing poisonous rifts whenever they’re located. If a task needs to be done, the Demon Hand’s got a pretty good chance of helping players do it. 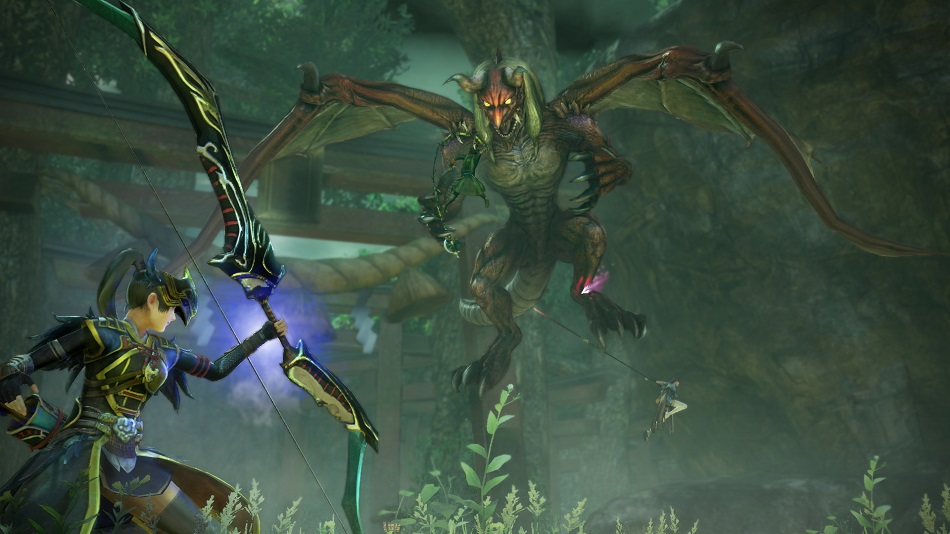 One of the biggest additions to Toukiden 2 is that there’s now a large open world to head out into before hacking demons into a puddles of barely-recognizable mush. Sure, this doesn’t sound like a big deal given that open world games are two-a-penny these days, but in the context of the hunting genre, it’s revelatory. Thanks to this, the storyline alone suddenly feels way more organic and natural than chewing through dozens of static hunting missions, and being able to head into the wild at will does wonders to stave off feelings of repetition. Seriously, I can’t overstate how much I like this change. It may not be the best-looking or most complex open world out there, but there’s more than enough to keep things interesting.

Naturally, every previous weapon type has carried over from the previous game, along with a few new additions to keep things fresh. The sword and shield allows players to build up attack power while in a defensive pose and then unleash it by swapping over to a specialized attack form, but I personally opted for the new chain whip — think Ivy from Soul Calibur, only with the option to chuck dozens of kunai into enemies and explode them at will.

Huge bosses still make up the bulk of Toukiden 2‘s gameplay of course, and the approach to these battles is still to smash off their appendages and purify the remains so that the enemy’s life force is exposed via phantom limbs. There’s also the matter of the Demon Hand being able to permanently destroy these phantom replacements, so there are now new phases where Oni have to deal with their bits going missing — seeing them dragging themselves along with one arm and such is pretty neat, and the fact that most bosses naturally have smaller health pools than the first game makes extended fight sequences less of a drag.

There are still a few problems with the package, however. Progress made in the campaign doesn’t carry over into the multiplayer except for unlocked equipment, so it requires a fair amount of grinding through too-easy missions before it becomes even remotely challenging. A simple gear check to block underleveled hopefuls would have been a far more elegant solution.

Speaking of the multiplayer, there’s also no way for a group to play through the campaign together, and worse, the open world is completely cut off while playing online. It’s a bizarre decision that leads to the multi feeling like more of a grind than it has to be. It’s also worth noting that there’s not as many armor and weapons sets as the last Toukiden offered.

In the end, Toukiden 2 comes as a nice surprise. It improves upon the decent original in many different ways that make sense, and most of these changes ensure that smashing boss after boss doesn’t feel anywhere near as repetitive as it did in the past. When I was done with the first Toukiden, I was completely burned out and desperate for a break. After finishing Toukiden 2? I’m raring for more. Rating: 8 out of 10

Parents: According to the ESRB, this game is rated Teen and contains alcohol reference, blood and gore, mild language, mild suggestive themes, partial nudity and violence. There’s very little to shock or offend within, even the craziest bouts of action are practically bloodless.

Deaf & Hard of Hearing Gamers: There should be no problem here, the dialogue’s in Japanese and subtitled, and there’s no real requirement to hear audio cues in order to play the game effectively.