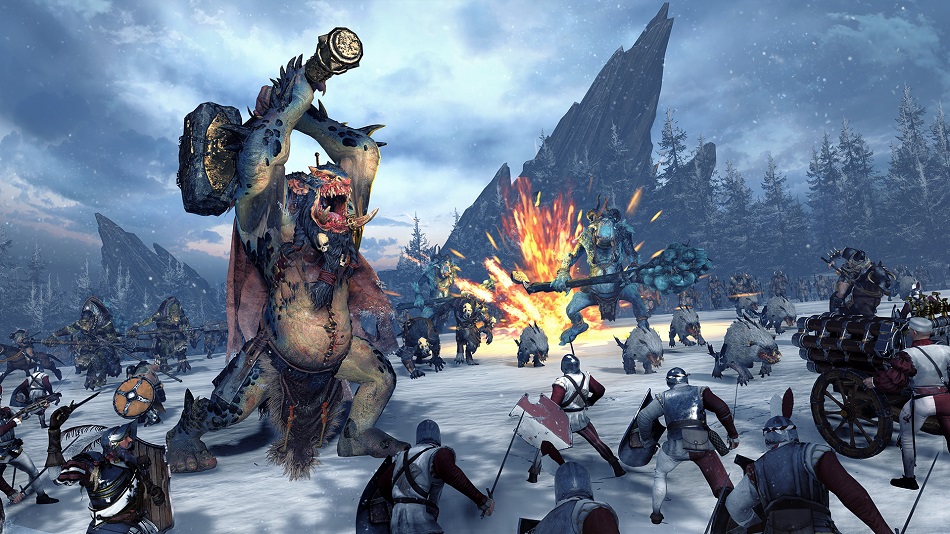 LOW The loading times add up over the length of a standard campaign.

War! What is it good for? Videogames, obviously.

Armed conflict may be a bit cack in real life, but virtual battlegrounds filled with bellowing madmen trying to bash someone else’s face in can offer some of the finest and most tactical experiences out there. Of these, Total War is a well-known and respected franchise, though it’s only recently that the series has dropped scenarios based in reality for the Warhammer universe. It’s a welcome change, in my opinion, given that an army of rats swarming a battalion of high elves and chowing down on their uppity flesh is a neat alternative to watching boring old humans cracking each other’s skulls.

TW:W2 isn’t just bludgeoning people to death on a battlefield, though. There are important elements of empire building and maintaining relations with other factions tucked in for good measure, too. This all takes place in a turn-based system where armies can be moved across a large overworld map to secure strategic locations, cities can be developed and torn away from unfriendly hands, and an army is nurtured until it becomes an unstoppable force capable of steamrolling any enemy. In theory, anyway. The other factions are attempting to do the same, of course, so it’s important to acquire a steady stream of resources through destruction, diplomacy and infrastructure.

Some elements are as simple as clicking on a friendly army and then clicking on an area or a hostile unit to perform whichever task is required — anything from taking over some ruins to annihilating everyone standing in the way of glorious conquest. Only a set amount of actions can be performed per turn depending on the player’s given situation, and between turns it’s possible to engage in political skulduggery – things like influencing how rival factions view each other, to making trade agreements that rake in cash from tariffs and goods. Of course, every enemy on the map gets to take their turn as well, so it’s best to prepare like hell for situations that can change on the fly.

Total War: Warhammer 2 differs from its immediate predecessor in some significant ways. The first and most obvious one is that there’s a new focal point for the campaign – a magical maelstrom known as the Great Vortex is up for grabs, and all of the factions want control of it. While domination victories are still possible, most campaigns now end when one of the factions accrues enough resources to seize the Vortex. If a faction performs five rituals, one final battle is triggered and boom! The game is over. 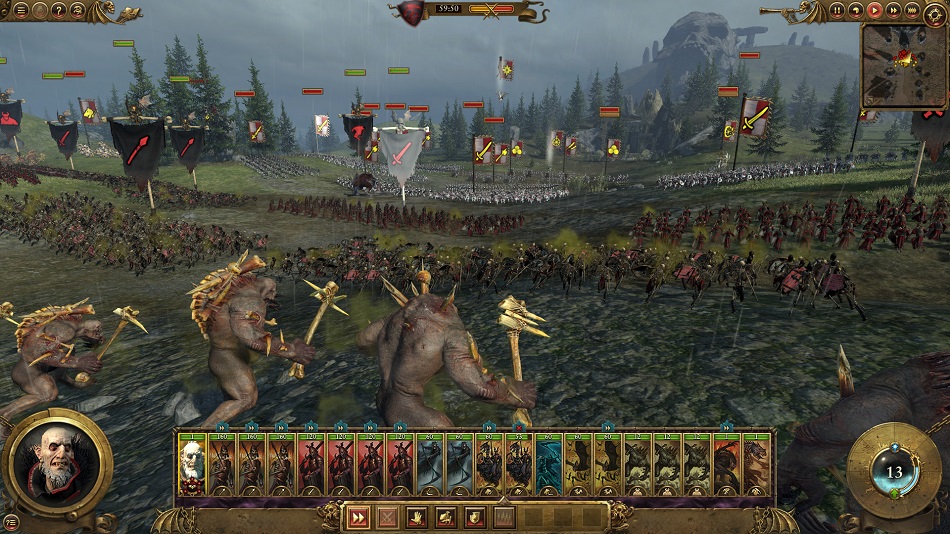 Looking at TW:WH2‘s battles, players can usually choose to go as in depth as they wish when their armies clash with their neighbors — anything from taking control of an overhead map and manually marching each unit into position to simply auto-resolving a conflict is possible. Maybe I’m a bit crap at tactics, but letting the game roll some dice and work things out for me wound up delivering less catastrophic results than my own performance most of the time. At least, that was the case on the normal difficulty. I suspect higher difficulties require sharper commanders.

The new factions are interesting. There may only be four, but they all have a number of unique traits. High Elves like to meddle in others’ affairs through diplomacy, intrigue and manipulation. Dark Elves find that enslaving their victims bolsters their workforce, although massing too many in one place can lead to public disorder. Then there are the Lizardmen, who can ride into battle atop what are essentially massive dinosaurs. They’re kinda awesome.

Those characters are all great, but my personal favorite are the ratlike Skaven. They can’t build up empires in the same manner as their rivals, otherwise they’ll run out of food and suffer from their own brand of corruption. Instead, they have to spread like a virus across the map once they’ve plundered what they can in order to remain effective. Also, enemy armies can get a hell of a shock when they attempt to colonize a seemingly-empty ruin only to have an army of Skaven burrow up from the depths. And once the battle’s over? Sell the captives, send them back to the nest, or eat them where they stand. Choices, choices.

While most elements here work well, I’ll say this now – diplomacy can be a bit on the weird side, with certain factions making ludicrous, petulant demands from out of nowhere, or getting absurdly touchy about minor things. It can sometimes swing from a partnership woven out of rainbows and hearts into a sudden hate-fueled rush towards mutual extinction in just a few turns, and making sense of it is tough. For example, at one point a friendly faction decided to declare war on my army and then offered a fat settlement offer a few turns later without ever actually launching an attack. Thanks for the money, chump?

The other problem I have with TW:WH2 is that the load times and number crunching can become excessive. The AI zips around the map collating data from other factions after each turn, and it can take a while to update the status of the world and return control to the player — even longer if the player takes care of each battle personally, instead of auto-resolving. I’m sure fans of the genre are used to this, but as someone who only occasionally dips into these epic campaigns, it definitely tested my patience at times.

So, Total War: Warhammer 2. As weird as some the diplomacy and other mechanics can be, it’s an impressive title with a ton of depth to get stuck into. Now, I’d better get back to my current mission in progress — those enemy armies won’t eat themselves, after all. Rating: 8.5 out of 10

Disclosures: This game is developed by Creative Assembly and published by Sega. It is currently available on PC. This copy of the game was obtained via publisher and reviewed on the PC. Approximately 120 hours of play were devoted to the single-player mode, and the game was completed.

Parents: According to the ESRB, this game is rated Teen and contains Alcohol Reference, Blood, Mild Language, Mild Suggestive Themes and Violence. It’s not particularly graphic, though having rats chewing through their fallen enemies and the like is pretty dark stuff.

Deaf & Hard of Hearing Gamers: Audio cues often indicate when something’s happening on the battlefield that requires attention, though there are usually visual prompts that accompany them – though they may require a keen eye in certain situations as I found myself missing some of them as they occurred. Players with hearing difficulty may have a tougher time.