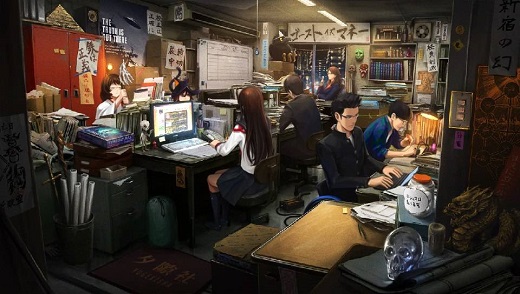 LOW The battles take a while to get used to, and even then aren't particularly great.

WTF Combatants happy to smash televisions and other valuables while swinging at ghosts.

Tokyo Twilight Ghost Hunters is a visual novel that puts players in the shoes of a transfer student arriving at a new school—one which has a bit of a spooky problem.

A spirit has taken up residence and started slinging students off the roof for fun, so it's handy that this new kid has an uncommonly high sensitivity to paranormal shenanigans. Most normal people can't see apparitions, but the player's an exception and is quickly drafted into the world of spectre elimination by a company known as the Gate Keepers.

The first thing that most players will notice is that Tokyo Twilight really puts the 'visual' in 'visual novel'. It's gorgeous, with all sorts of eye-pleasing trickery in its presentation. Even though environment backgrounds tend to look like little photographs with some quick filters thrown over them, characters and illustrations frequently have excellent animation bringing them to life. The sound is also uncommonly strong, though this isn't a really a surprise given the involvement of Arc System Works.

The localization is solid, and the story itself is reasonably engaging and filled with entirely decent characters—some of whom may not be quite right in the head, but are likeable enough regardless.

Technically, Tokyo Twilight boasts one of the strangest interaction systems ever devised by a human mind, coming out of nowhere with absolutely no explanation and no gentle introduction to its mysterious ways.

Early in the game, the protagonist is expected to respond to a schoolgirl bumping into them. In most games, this would come in the form of simple dialogue options—that is to say, something easily understandable and logical. In Tokyo Twilight Ghost Hunters it comes in the form of a wheel denoting certain emotions, followed by a wheel depicting the five human senses.

Trying to figure out what the hell's likely to happen with this setup is a game unto itself, although I should have expected a poor response when I angrily attempted to smell her. Whoops.

Questioned by cops at a murder scene with bloody knife in hand? Explain it away with a 'thoughtful lick'. Accidentally cause a ten car pileup whilst driving under the influence? Why not react with a 'loving touch'?

Occasionally these choices result in total surprises, with the player suddenly listening to whatever's going on in the background instead of the person talking right in front of them. It's madness, but in all fairness this system did allow me to try and give Chizuru a hug every single chance I got, so hey. I guess that sort of balances how whacked out it all is?

The battles are weird too, despite their initial similarities to grid-based tactical games such as Battleship. (Yes, the board game.)

Since enemy ghosts are invisible during combat, breaking out special ghostbusting gear is heavily encouraged. Spirits can't pass over salt, for example, while other items may damage them, detect their whereabouts, or funnel them down a certain path. All these additional aids cost money to set up, forcing players to balance out the amount of help they'll require during a mission with their own ability to gauge where the ghosts will be when they activate their attacks.

The twist to this battle system is that ghosts and their hunters both move on the same turn. Knowing where a ghost is at the start of a turn doesn't necessarily mean that it'll still be there during the attack phase, and this takes some getting used to—as does the fact that charging in swinging like a madman is going to wind up trashing the environment, which the company will then be billed for after the dust settles. Losing money on exorcisms is definitely frowned upon, so restraint and thought are required in each encounter.

Despite how unconventional it is, the combat system isn't particularly engaging. Even after I had it down cold, I never grew to love the mechanics. It just feels like a cheap minigame dropped in to give players something to do, and the lack of a decent tutorial will leave some floundering. The size of the text in these sections is also absurdly small, and the amount of squinting required could rupture blood vessels—it seems like it wasn't intended for the Vita's screen size.

The attempts to innovate the genre with combat and the sense-based responses are unfortunate. Tokyo Twilight tells a good story and I did like the characters and scenarios, but when it deviates from the standard visual novel format with these awkward diversions, it stumbles pretty hard. Rather than being exciting additions, they feel like unfriendly barriers to what should be the focus: continuing the story. Rating: 6.5 out of 10


Disclosures: This game was obtained via publisher and reviewed on the Vita. Approximately 25 hours of play was devoted to single-player modes (completed 1 times) and there is no multiplayer.

Parents: According to the ESRB, this game contains: alcohol reference, blood, mild language, partial nudity, use of tobacco and violence. There's nothing in there that I'd have had any problem letting younger players see.

Deaf & Hard of Hearing: Not much to worry about here. Dialogue is primarily delivered via text, and warning beeps and the like tend to have related on-screen cues whilst engaged in battle.

It’s a weird game I’m strangely fond of even though actually playing it could be a bit of a pain at times. The presentation and writing account for a lot of its charm.

If text size is an issue, then I’ll go for the PS3 version. Even with the flaws you outlined I still want to give this game a shot for how weird it sounds. Also, I’m curious to see just what can come from the various “five senses” interactions you described.