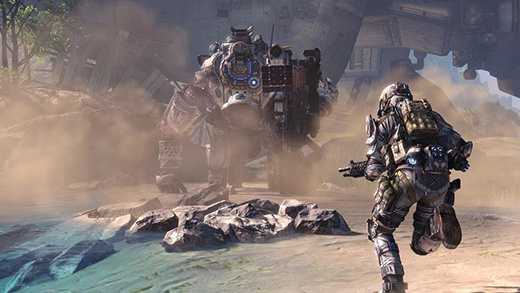 HIGH Accidentally dashing over an enemy Pilot and gaining some unearned points.

LOW Accidentally being stepped on by an enemy Titan and giving him some unearned points.

WTF I've played a lot of the campaign and I still don't know why anything is happening.

It's safe to say that most people have heard of Titanfall

Developed by Respawn Entertainment (a house spearheaded by key Call of Duty creators) it's had quite a bit of hype leading up to its release. Quick impressions are that it's about big robots doing heavy-duty running and gunning, but it's not the usual offering—there are no offline or singleplayer modes, and all of its resources have been poured into making the online multiplayer as polished and exciting as possible. The choice to focus it so squarely in one direction might have been a gamble, but all of Respawn's hard work shines through.

Players in Titanfall are classed as ‘Pilots', who are the only operatives on the battlefield allowed to call in the massive mechanical constructs known as Titans. These Pilots are incredibly agile, able to run around almost anywhere, whether clambering on rooftops or scurrying into the corridors of nearby buildings. Titans may not be able to force their way into narrow confines, but they're outfitted with enough shields, armor and ordinance to wipe out a small country. They follow their Pilots around automatically when not under manual control, and will engage hostiles in the vicinity upon discovery. Of course, they also provide an additional layer of protection for a Pilot snuggled away inside the cockpit.

While Titans may be powerful beasts in the right hands, they're far from invincible. Pilots have anti-Titan weapons available at all times, so simply boarding a Titan isn't a reason to slack off. Death by bee stings is very much a threat during each match—only these bees are practically ninjas, and their sting tends to involve the use of high explosives. This balance between the Pilots and the Titans lends itself well to the action-packed gameplay. The pacing is insane, with every player on the map typically sprinting around like madmen. They run along walls, pull themselves up onto lofty perches, and are routinely able to put ten bullets into an enemy's head before they even hit the floor.

Since I find the multiplayer in Call of Duty titles about as enjoyable as chewing a month-old sock, there was a bit of an acclimatization period for me when I started out. After about an hour or so, the shock wore off and I began to adapt to its hyperkinetic pace—and shortly after that, I started to actually get half-decent, and enjoyed it a hell of a lot more.

Breaking things down, Titanfall's game modes are pretty standard fare—Attrition is a fancy name for Team Deathmatch, Hardpoint Domination is a case of hunkering down at key locations until they've been claimed for one side, and Capture the Flag involves capturing a fucking fla… I don't need to say any more here, do I? I'm guessing most readers know how this goes.  Win or lose, the final phase of each round involves the losing team attempting to board an incoming dropship before it departs, and the victors are tasked with either killing them—or more satisfyingly—blowing their ride out of the sky.

Playing on PC with a pad was fine for the most part, and certainly does a good enough job to stay competitive. Titanfall's matchmaking is somewhat suspect, though. It has no qualms about having the ‘quick play' option hurl players into the last five seconds of the final campaign stage, nor does it hesitate to add an extra player to a side with five competitors when the other's only got four. Moreover, empty spots can remain empty well into a match—in a game with only six players per side, having one pilot missing during hardpoint capture is an imbalance that's keenly felt. With two pilots missing, it's a hopeless struggle.

Forget any complaints regarding the six-on-six player limit though, as the game is packed full of action and encourages multiple approaches to any given situation. The maps also have a bunch of AI bots stuck in there as well, though they're not on the level of actual Pilots—they're basically resources to shoot at during downtime. Admittedly, the unrelenting pace of each battle can make matches feel one-note from time to time, but it's one hell of a note to be stuck on.

Aside from a few minor quibbles (I can jump across streets and hop over entire buildings, but a knee-high window ledge is insanely finicky to get past?) Titanfall

is undoubtedly a great game which does an exceptional job of breathing new life into an increasingly-stale genre. Time will tell whether the player base finds unfair advantages or begins using tactics that impact its enjoyment adversely, but as for right now? It's pretty damn glorious.


Disclosures: This game was obtained via paid download and reviewed on the PC. Approximately 42 hours of play was devoted to multiplayer modes (campaign completed multiple times) and there is no single player mode available.

Parents: According to the ESRB, this game contains blood and gore, strong language and violence. To be honest though, it's pretty tame on the violence and swearing front. An odd neck snap here or there, or a pilot bursting into a splash of blood that disappears in a nanosecond is about as vicious as it gets.

Deaf & Hard of Hearing: Subtitles are available for use, but a game like Titanfall relies a lot on being able to hear what's going on around the player. A minimap does aid in locating unseen enemies, though without audio cues conveying important information players will certainly still be at a disadvantage.