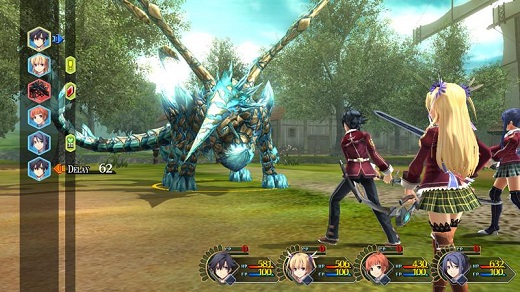 HIGH Blasting enemies in the back with a shotgun to initiate encounters.

WTF Is BLADE the least interesting card game ever devised? Quite possibly.

In Legend of Heroes: Trails of Cold Steel players are plopped into the role of Rean Schwarzer—one of those absurdly kind and polite protagonists that only exist in the JRPG genre. As the story begins, it's learned that he's a new student to the prestigious Thors Military Academy and quickly assigned to the newly-established social experiment Class VII. Once in, he's handed a special type of battle Orbment known as an ARCUS.

Like other Trails games, it's a bit of a slow burn. Rean and chums don't exactly hop into action and save the world every five minutes since there's a ton of worldbuilding and slow escalation. Most of the initial conflicts deal with social class—those darn nobles stare down their noses at the common rabble, all poor and dirty and stuff, while the commoners generally find these uppity jerkbags about as tolerable as boils on their backsides. There's definitely some resentment circulating among the populace.

Both the storyline and the gameplay revolve around Class VII's day-to-day activities within the academy, as well as the various tasks they're stuck with—from menial jobs like delivering packages to faculty members, to investigating an ominous dungeon within the school grounds that continually reshuffles its layout and just happens to be filled with vicious monsters. They also get sent out on a bunch of field expeditions which allow them to check out the world at large and usually fix a few problems along the way.

The cast themselves are a pretty likeable bunch, even if they're initially little more than a bunch of stereotypes. Machias is a commoner with a chip on his shoulder, Jusis is a noble who sets himself apart from the rest, Alice is a traditional tsundere, Laura's a dignified swordswoman who carries a blade that can cleave a stagecoach in half…  Oh, and their instructor is lazy, workshy and frequently portrayed as borderline alcoholic. She's great. It's all a bit too standard at first, but it works out given that the writing is solid and the underlying story is fleshed out.

The battle system is excellent. It's reasonably tactical, surprisingly punchy despite being turn-based, and one of the few JRPGs where I feel they've made character buffs not only integral to the combat, but actually enjoyable to use.

There are a bunch of options available, from smashing enemy groups apart with area-of-effect attacks to interrupting their arts while they're still charging them up. Other factors spice things up, like how characters that get on well with one another will leap to each other's aid while granting extended attack combos, or how super attacks can be initiated any time (even outside a character's turn) so long as they have the necessary juice to be performed.

What I really appreciated about Trails of Cold Steel, though, was how user-friendly the whole thing is. Fast travel can be done from anywhere in the city, with multiple destinations to choose from. Saving's as simple as heading into a menu and choosing it, with no hunting down save points necessary. The squad's health can be replenished and settings tinkered with prior to nearly any serious encounter. And if a boss turns out to be too difficult for an under-leveled party? The retry menu allows for said boss to be weakened appropriately. A positive user experience is something Falcom is clearly invested in.

There are a few quibbles I have, mind. One problem is that some of the available quests during each chapter aren't advertised in any way and have a limited window of opportunity to be done, so they're easily missed by accident while following the main storyline. It's painful to play through games with a guide at my side in case I miss anything, yet my completionist nature practically demands it here. It's annoying, and such secretive content is typical of the JRPG genre as a whole.

Also, while it looks pretty decent on Vita, the performance isn't perfect. Busy scenes can have some framerate issues and the loading times can occasionally get a little lengthy. They're minor issues, but issues nonetheless.

Ultimately, while Legend of Heroes: Trails of Cold Steel is a solid JRPG sure to be enjoyed by fans of the genre, it must be said that it doesn't break any new ground. Genre vets will be instantly familiar with what's here, but those looking for a fresh take should look elsewhere. However, it nails everything that it attempts to do almost perfectly. The plot may need a little patience from its audience before it really gets rolling, but those in the market for a top-class JRPG should know that this one comes highly recommended. Rating: 8.5 out of 10

Disclosures: This game was obtained via publisher and reviewed on the Vita. Approximately 75 hours of play was devoted to single-player modes (completed 1 times) and there are no multiplayer modes.

Parents: According to the ESRB, this game contains blood, language, mild suggestive themes, use of alcohol and tobacco and violence. Not much else to add, teens can easily play and enjoy this without fear of being scarred for life.

Deaf & Hard of Hearing: Pretty much everything is subtitled, and I can't recall any instances where being unable to hear sound would affect someone's ability to play the game.

Remappable Controls: Certain functions are remappable, though the ability to change things around is limited—things like which buttons are used to zoom in, change character, and so on can be altered, but otherwise there aren't many reconfig options..