It’s Good To Be King 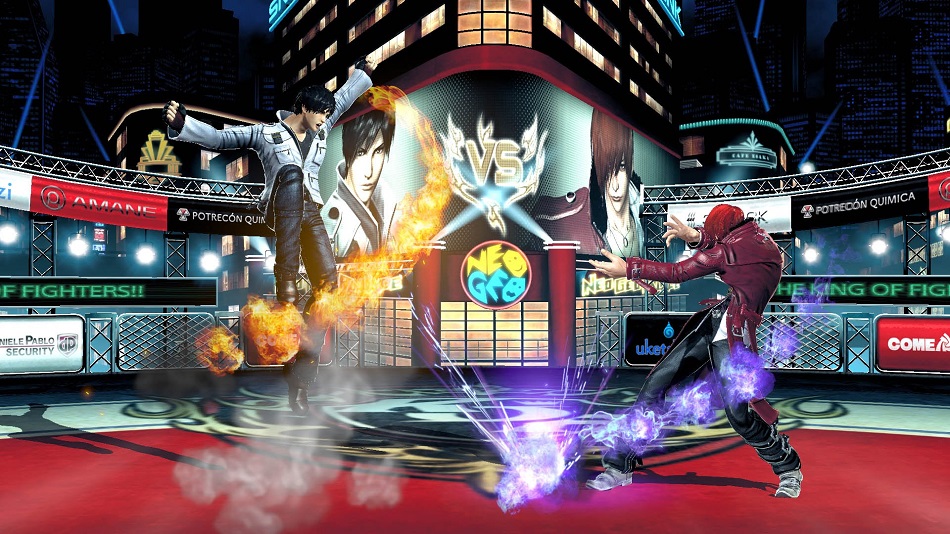 LOW It’s looking better than before, but could still use more graphical flourishes.

WTF Sylvie Paula Paula’s in the roster. Blue Mary, Yamazaki, Whip and Vanessa are not.

Let’s just (rising) tackle the most obvious thing about The King of Fighters XIV right out of the gate — it’s finally made the leap to 3D after years of holding out as one of the last sprite-based fighters. The rising costs associated with such an approach have finally taken their toll and forced the series into using 3D models, casting aside the personality-filled spritework of the past.

This new visual approach initially came up short when compared to its contemporaries. In fact, the graphics were so flat and lifeless at launch that SNK launched a fairly recent update to revitalize the graphics through use of more advanced shaders and effects, and the change is startling. It looks… pretty decent now! It’s nice to see SNK putting so much extra effort into this latest release alongside the usual balancing and netcode patches.

Fortunately, the gameplay in King of Fighters has made the leap to 3D extremely well — it feels great. Naturally, comparisons have always been made between KoF and other brawlers in the genre like Street Fighter, but I always loved how the movement in KoF set it apart. This movement still holds up by allowing players to zoom around the arena by letting them run, initiate various heights of jumps to close distance intelligently, and perform acrobatic rolls to avoid physical attacks.

It’s a classic system that hasn’t aged a day. Super meters fill up as blows are exchanged, allowing for a maximum of up to five meters to be charged in reserve once a few teammates have bit the dust, leading to some fancy combos or desperate, meter-burning escapes once things start getting a little hairy. The special moves are reasonably simple to pull off, though some of the commands are arguably more complicated than most of the competition. Supers, for example, might involve a quarter circle back, half circle forwards rotation coupled with two punches, that sort of thing. It’s tried, tested, and as solid as it gets.

That’s not to say there’s nothing new in this fourteenth installment, though — there are also a bunch of fresh gameplay systems in place, all of which are well thought-out and integrate nicely with one another.

Beginners can perform small combos by slapping the square button multiple times. EX moves (powered-up special attacks) can only be performed after initiating MAX mode, which is a new burst cancel chaining mode which allows for linking out of standard blows then sweeping into alternate, more powerful combos.  There are also a bunch of ways to chain specials into supers, or supers into apocalyptically-devastating finishing moves which feature neat little cinematics as they trigger. Ralf wading through flames after smashing his opponent into a pulp is a personal favorite, and dumping five super stocks into a combo can easily result in an 80% life bar destruction. 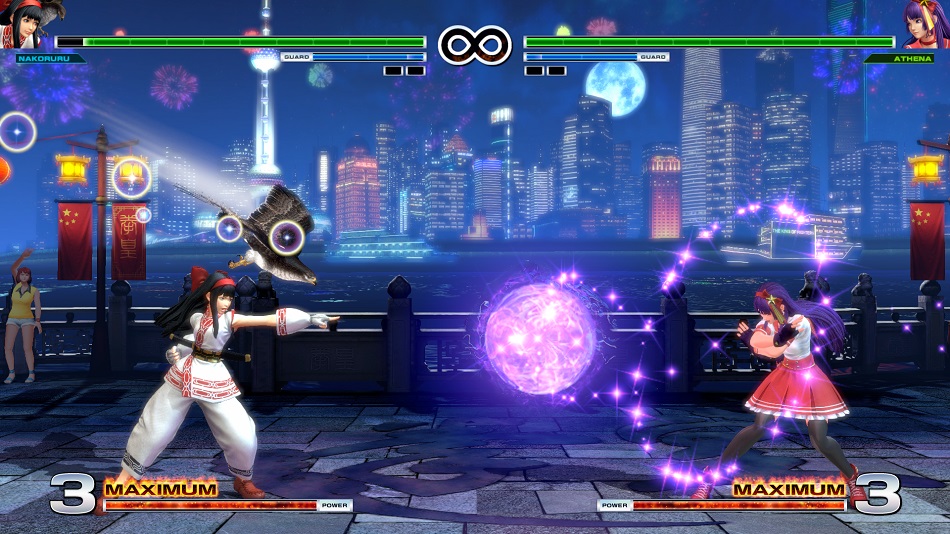 The roster of characters is pretty good overall, even if a bunch of my favorites (and previous mains, dammit!) are missing in action. Mindblowingly, most of them pop up as cameos in the women’s team ending, seemingly for the sole purpose of taunting me. Still, there’s a good variety of characters past and present, and some of the newcomers are great.

Alice is a cute and fairly amusing Fatal Fury fangirl who styles her moves after the Bogard brothers but screws half of them up. Xanadu’s a screaming lunatic who seems to get weirdly distracted during fights, and there’s one dude who seems to be made out of sand, leaving afterimages of himself to attack or confuse his opponents. Of course, none of them match up in sheer awesomeness to King of Dinosaurs, who dresses up like a dinosaur and claws his opponents in the face — perceptive players may recognize he’s actually a returning character from another SNK game wearing a new costume. With 50 playable characters to choose from, there’s bound to be a team that fits any playstyle.

There’s a comprehensive selection of modes too — story mode features largely meaningless cutscenes featuring tournament sponsor Antonov interspersed with personal dialogue when certain characters meet up. The training mode is exactly what any fighting game fan would expect, filled with handy features like the ability to record inputs and play them back at will, or to be able to go crazy with a full super bar on a whim. Combo trials are back to coax out easier combinations from players than ever before — King of Fighters XIII was known for some ludicrous combo challenges, and XIV arguably swings it too far in the other direction. They’re way too simple and too similar to one another, though they’re at least effective.

Then there’s the online, which offers a ton of choice as to how players want to experience the game. Not a fan of fighting in three on three teams, where each character is replaced as they get knocked out? Pick one character instead and go for solo matches. Want to fight a bunch of other players at once? Open up an online lobby for up to twelve gamers, then choose whether the winner or loser gets eliminated from matches, with other players either watching or getting stuck in on other virtual cabinets. Want to share team members with other players? That’s possible too. It’s a pretty great setup with a lot of options available, though it does run the risk of fragmenting the player base by having too many choices to pick from.

The netcode has been patched since release, so my initial complaints about the online being bugged no longer applies, but there’s still a few lingering annoyances. If the host leaves a room for any reason, everyone is summarily booted out as well, even if they’re midway through a match. Why? It’s also worth noting that if someone ragequits while they’re losing, the person beating them down does not get credit for a win.

While these complaints are not enough to cripple the game, it’s a shame that SNK has done such a tremendous job with most of the things that matter, only to stumble on certain design issues. Minor missteps aside, It’s pretty brilliant, and it’s safe to say that the series has made the leap to 3D surprisingly well despite still needing some polish, and maybe a bit of a facelift as well. Rating: 8.5 out of 10

Parents: According to the ESRB, this game is rated Teen and contains language, suggestive themes, use of alcohol and tobacco and violence. There’s nothing overly graphic, though females tend to show a lot of skin and characters such as Luong can do sexy things during special and super moves.