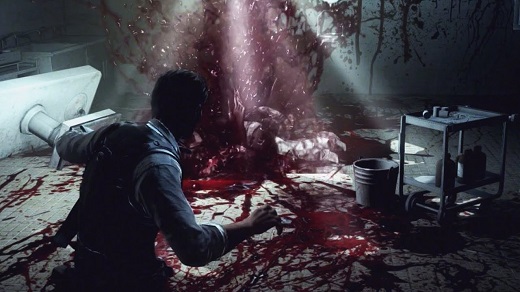 HIGH Tossing a grenade into the midst of four shamblers and watching the limbs fly.

LOW The awkwardly-handled boss fight against a giant dog thing.

WTF Huge black borders cropping off 30% of the screen was a good idea?

Pity Sebastian Castellanos. Weep for him!

Within ten minutes of The Evil Within starting, he shows up at a mental institution to investigate a massacre before promptly getting kidnapped by a supernaturally-powered psychopath named Ruvik and then… well… The world pretty much ends around him, forcing him from one seemingly disconnected environment to the next with a horde of flesh-eating nasties in hot pursuit. If he can’t figure out why everything’s gone to hell, nobody’s getting out alive.

The storyline here is standard fare for a horror title, perhaps a bit less so. Our illustrious protagonist noting that ‘there’s something wrong with this place’ as homicidal hell-rejects try to chew his flesh off and suck his eyeballs out is a good example of the kind of not-much-to-say narrative at work.

Worse, the characters involved are some of the blandest, most humorless goons in the entire history of video games. Sure, it might be tough to come up with witty quips while a slavering maniac is trying to saw their heads off with a chainsaw, but Sebastian routinely reacts to supernatural enemies like he’s bored out of his mind. It soon becomes impossible to root for him or his wooden plank of a partner. In fact, a sentient wooden plank would definitely be funnier, so that comparison is probably overly generous to these joy-sapping jerks.

The gameplay is a strange mash-up of horror titles that have come before. In the early stages, stealth plays a big part in Sebastian’s ongoing efforts to continue breathing. It’s not as entertaining as whipping out a shotgun and vaporizing enemy heads, but it has to be done—ammo is scarce, and enemies are good at absorbing gunfire without going down. Sneaking is also highly advised in many later areas so he doesn’t get his legs blown off by the umpteen types of traps scattered around the environment.

The actual combat is better than the pedestrian stealth, which makes Tango Gameworks’s attempts to bury it beneath the ‘survival’ element somewhat baffling. With so little ammo around, missing a few shots can seriously screw with Sebastian’s chances of making it out alive. Every time a decent stockpile of bullets is within reach, a boss encounter usually appears to soak them up, leaving players limping from one encounter to the next.

It’s unfortunate, because the gunplay can be satisfying when it wants to be. The shotgun is especially awesome to behold. Lining up two or three bad guys before pulling the trigger and watching them catapult backwards across the room in bloody tatters is an exceptional feeling, as is catching a crowd of them with a well-placed grenade that turns them into squishy giblets.

While the melee is borderline useless, it’s still worth staggering enemies then getting in close so that Sebastian can casually flick a match at them and cheerily watch them burn to ashes. They might be fond of brains, but they aren’t too keen on being incinerated. It’s an enjoyable mechanic, often catching other nearby aggressors in its fiery grasp. 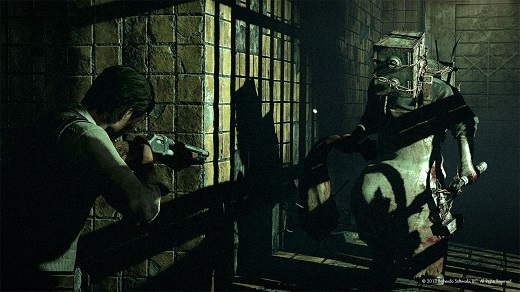 The combat still has issues, mind; the aim mode zooms way too far in for comfort, often obscuring the action and leading to awkward camera angles. Perfectly-placed headshots sometimes don’t land despite marks left on the walls indicating that the trajectory of said bullets should have passed clean through a crunchy noggin. Also, Sebastian’s complete inability to dodge or even sprint for more than two seconds without a lung collapsing makes for some awkward scenes where he’s running around in circles trying to create space between him and his foes. Players can upgrade his stamina later in the game, but still.

In fact, nowhere is enemy avoidance more awkwardly handled than a section where the antagonist Ruvik teleports (at random) into a room to insta-splatter Sebastian like a fleshy grapefruit.

The only viable option is to hide from the evil bugger by leaping into a cupboard or diving under a bed, but the problem is that he usually appears before possible hiding places have been scouted out. The result is neither scary nor challenging—it’s just irritating, especially given that the camera isn’t designed to facilitate finding somewhere to hide in a hurry. The field of view is simply too narrow to easily identify these spots under pressure, and hidey holes often lurk offscreen without wheeling the camera entirely around. It’s not a huge problem elsewhere when there's time to explore, but in a timed section with instant death looming and the checkpoint restart that's sure to follow, it’s pretty dire.

This Ruvik section is just one of the many times when The Evil Within assaults players with one of its most annoying aspects—the developers just adore dishing out instant-kills.

During one memorable example, Sebastian was doused in acid and immediately died after my ill-fated attempt to amble through a doorway. I could see sizzling drops spattering below the doorframe, but figured that since enemies were waltzing through with no problems, all I needed to do was time it just right and… oh. It triggered a cut-scene and now he’s dead. Not that I didn’t have my suspicions, but the logic behind some of the traps or encounters doesn’t really come across as intended, especially in instances like these where enemies aren’t affected at all.

Similarly, bad guys won’t trigger proximity bombs that are in the area, but they’ll set off tripwires or occasionally be chopped to mince by spinning blades. Potential fatalities can be inconsistent, requiring trial and error to see what works because Sebastian somehow follows different rules of physics than his enemies do.

Even with all of these complaints leveled at it, The Evil Within isn't necessarily a waste of time for fans of the horror genre. The environments are often excellently realized, with one particular highlight taking place in an expansive churchyard at sunset. Exploration is frequently rewarding, and the game also continually shakes things up throughout the adventure with new mechanics or notably different locations. And, as i suggested earlier, the combat is enjoyable when players are allowed to cut loose and get stuck into their otherworldly aggressors.

Overall, it’s a shame that the final game feels like a missed opportunity to bring the survival horror genre back into the spotlight. Between the poor story and characters, familiar elements from other games and the problems I had during my playthrough, it seems as though The Evil Within is content to live in the past instead of than drawing inspiration from it and moving forward. Rating: 6 out of 10


Disclosures: This game was obtained via publisher and reviewed on the PS4. Approximately 16 hours of play was devoted to single-player modes (completed 1 times) and there are no multiplayer modes.

Parents: According to the ESRB, this game contains blood and gore, intense violence and strong language. This is pretty factual stuff as humans tend to be torn apart and used as snazzy decorations throughout. They're stabbed, shot, burnt, shanked and generally treated without any sort of basic human dignity whatsoever. Keep the kids clear of this one.

Deaf & Hard of Hearing: While subtitles are available, it can be hard to stealth or run from enemies without the aural clues they often provide. Proximity bombs beep before detonation—without the ability to hear them, cheap deaths may result from unseen explosives.