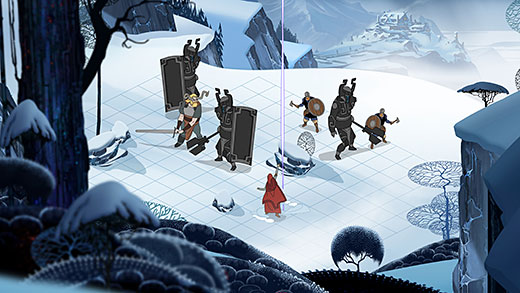 HIGH Setting up four enemy units to be cleared out in a single Warhawk Tempest swing.

WTF ‘There must be at least 898 of them' is pretty accurate guesswork when estimating enemy numbers.

For those not familiar with what The Banner Saga is, it's the result of a successful Kickstarter campaign by several ex-Bioware employees. It's one part Tactical Strategy RPG, one part Oregon Trail and one part Scandinavian starvation simulator.

Decisions made out on the trail are dealt with via multiple choice answers in the vein of Mass Effect or Dragon Age, whereas battles are dealt with in a grid-based battlefield reminiscent of the Shining Force games or Final Fantasy Tactics. Tying these systems together is a tale of desperation and survival against all odds when the world's sun starts to fail.

If that sounds like a lot of elements to juggle, it is — and the developers nearly pull it off.

As the game begins, the Gods are all dead, which probably sucks for everyone involved, so humans and a race of giants known as the Varl have banded together against their common enemy, armored monstrosities known as Dredge. Two separate groups head out from their respective territories as the game begins – one attempting to deal with the threat, the other trying to escape it by speeding away over the frozen landscape, but losing a toe to frostbite is the least of their worries. Losing a leg or torso to marauding hordes of enemies is a far more imminent prospect. Having characters starve on the trail due to insufficient supplies isn't exactly a great deal of fun either.

For example, when a group of fighters asked my permission to warn the locals of the marauding Dredge army, I asked whether they thought they could survive on their own. One of the options was to provide them with additional supplies, so if they were unsure of their chances, I could have provided them with additional support. ‘No idea' they replied, and buggered off before I could play the part of benevolent hero. They were never heard from again, the impatient, insolent dolts.

Their disappearance wasn't exactly a surprise because this world is absolutely swarming with Dredge aggressors. Running, scavenging and making decisions is only half the battle when it comes to keeping the caravan intact – the other half is engaging the enemy in the field before shoving an axe through their skull. In these skirmishes, each character has their own set of strengths and weaknesses to deal with encroaching enemies. Archers can fire from afar, warriors generally chop people up fast, and Varls take up four times the real estate of humans, making them ideal for blocking off certain approach routes.

Successfully bludgeoning an enemy army to death or making wise choices in conversation will result in obtaining additional renown, which is an all-in-one currency system used to promote characters who perform well in combat, but also to buy items and supplies with along the way. Juggling the balance books can require careful thought as having a caravan of full of starving refugees after blowing renown on shiny baubles probably isn't going to prove a very popular decision. Resources are limited, and the choice often comes down to keeping the caravan healthy and in good spirits, or ensuring that the core party members are in good fighting form for when they take to the field.

There is one aspect of the battle system that's remarkably irritating, however — both teams get their turn one after the other regardless of how many combatants either squad has left. It soon leads to an obvious problem: the last few enemies take their turns a hell of a lot faster than the player's force gets to. Those few left on the losing side will be getting multiple turns during each of these cycles, and likely killing anyone nearby. This can be skirted around by simply knocking down the enemy's health but leaving them alive so that they're dealing pitiful damage while weakened, but it's an inelegant solution – they can still sunder armor just fine even when they're barely able to stand, making it a lose-lose situation.

The game also shoots for a final battle which lands in the ‘epic' category, but sadly veers off to the side and spirals into the ‘awful' one instead.  Mentioning why is a tricky subject without spoilers, but let's just hope that several key characters have been levelling up alongside the rest of the group and are in good health. Otherwise, they're going to be about as much use as a chocolate fireguard with no final opportunity to train them at the very same moment the difficulty level spikes through the ceiling.

Overall The Banner Saga's an enjoyable product, just one that lets itself down in several key ways. It's almost where it needs to be, but these niggling issues prevent it from reaching its full potential. That said, it's a damn fine-looking game with quality writing at a reasonable price, and still comes fairly recommended for anyone looking to flee for their lives in a harsh and unforgiving environment. Rating: 7.0 out of 10


Disclosures: This game was obtained via publisher and reviewed on the PC. Approximately 15 hours of play was devoted to single-player modes (completed 1 times) and there are no multiplayer modes – though a separate release known as The Banner Saga Factions provides this functionality.

Parents: While The Banner Saga hasn't yet been rated by the ESRB, there's enough death, mayhem and double crossing to suggest that this may not be a game for the kiddies. It doesn't go overboard on the gore or language fronts, but it's a brutal and uncompromising world out there.

Deaf & Hard of Hearing: Despite having a good rummage around in the options menu, it seems to be that the Banner Saga has no subtitles for multiple instances of voiced dialogue. Most of the game's story is presented via text, but this is still a crazy omission.

We added subtitles in the most recent patch. This should help for hard of hearing or non English speaking players. The button is labeled “cc” in the options.

Hey John, that’s great to hear. The recent patch notes looked to have some other well considered tweaks in there too. Definitely interested to see how the series continues!