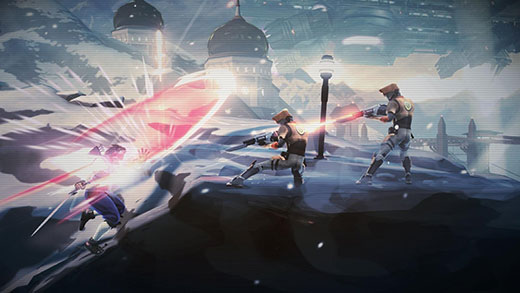 HIGH That first half hour of putting Hiryu through his paces.

WTF The dialogue in Strider is… man alive. It's… bad.

The latest Strider game wastes no time in getting started. There's a distinct lack of preamble as futuristic cyber ninja Strider Hiryu hang-glides into the outskirts of the heavily militarized nation of Kazakh with only one objective in mind: to eliminate the Grand Master Meio by whatever means necessary. It may not be much of a setup, but it's more than enough incentive to hop right in and lay waste to an empire full of miscreants.

…And lay waste he shall, for Hiryu's an exceptionally acrobatic and powerful character to control. Easily capable of sprinting around the screen and swinging his sword as fast as the button can be pressed, he's also able to slide under bullets, cartwheel over enemies, and cling to nearly any surface available. He's a bit of a badass—during the early moments of the game he pauses in front of a giant steel door, folds his arms and stares at it until it opens of its own accord. Even inanimate objects are fearful of his wrath.

This latest Strider isn't a linear game, either. There's a strong hint of the ‘Metroidvania' aspect to it, meaning that Hiryu will often find himself unable to progress in certain areas without unlocking new abilities found elsewhere, such as an upgrade which allows him to smash certain panels during his slide attack.

What I've described may sound great so far, but in practice there are a number of issues that hurt this latest installment of the franchise.

Chief amongst these quibbles is that… well, it becomes surprisingly boring after about an hour or so, largely due to its shallow combat, and there's little need for skillful evasion of enemy attacks. Foes with guns will unload them relentlessly until the screen resembles a bullet hell shooter, so it's more about cutting said enemy in half before the constant stream of bullets becomes impossible to dodge.

If this sounds like I'm moaning about the game being too hard, I'm not—it's that the general cadence of the action is too simplistic to engage players in any meaningful way. Truly great 2D action games understand the need to force players to learn and react to individual enemy patterns, whereas this Strider reboot only ever teaches one: get in fast and attack like a crazy person. Only a few later bosses buck this trend, but not by much and not for long.

Compounding the shallow combat, the game world itself isn't an interesting place to explore. It looks decent enough from a visual standpoint, especially when Hiryu's chopping bad guys into bits in the open air as opposed to the bowels of a grey military complex, but many of the areas feel too similar to be worth exploring in any detail. Given Hiryu's natural agility, there should be a wealth of discovery and clever terrain traversal. Sadly, it's all wasted on nondescript environments and straightforward ‘puzzles'.

Worse, most of the power ups are almost useless, and uninteresting to boot. Additional health and energy reserves are always worthwhile, if somewhat unexciting, but ‘upgrades' to Hiryu's arsenal such as hurling out extra kunai per throw and various additional elemental effects for the plasma charge feel almost meaningless in the greater scheme of things.

Oh, and just to really kick players in the teeth, there's no fast travel system available. If there's a part of the map shrouded in darkness at the other end of the game world, the only way to check it out is to have Hiryu sprint all the way through rooms filled with ceaselessly respawning enemies. There isn't even an experience system to encourage mutilating these bullet-spewing imbeciles, so towards the latter half of the game, I frequently found myself avoiding every enemy I could while backtracking.

It's a shame that Strider eventually grinds down into such life-sapping monotony because it starts off reasonably strong. The controls are sharp and responsive, and cutting enemies in half while dashing around at lightning speed feels damn good. Six hours later when my thumb was hanging off from tapping the attack button as fast as possible? Not so much. Rating: 4.5 out of 10


Disclosures: This game was obtained via publisher and reviewed on the PS3. Approximately 6hours of play was devoted to single-player modes (completed 1 times) and there are no multiplayer modes.

Parents: According to the ESRB, this game contains fantasy violence, mild blood and mild language. The enemies are nearly all robotic in nature, so hacking them up's not a big deal as far as traumatizing kids can go.

Deaf & Hard of Hearing: There are plenty of subtitles available, and most of the visual information should be more than enough to play the game with to a high standard.