Live by the Golem 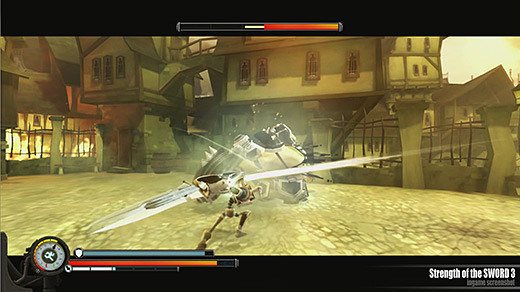 LOW The baffling amount of slowdown upon getting hit.

WTF Ah, turns out that God's a mechanic. Naturally!

Strength of the Sword 3

is a curious one.

First, there have never been any other games in the series – it jumps straight into the grand conclusion of the "trilogy" without wasting time on trivial stuff like creating the first two games. It also takes the idea of making games available to as large an audience as possible and chucks it out the window, focusing instead on making its formula tight and refined for those with the skills and patience to succeed.

…Well, that seems to be the theory, anyway. In practice there are a number of issues which harm the experience more than I liked.

After a charming animated sequence which details the main character, the Golem, dropping down from on high before trotting off to dispense justice upon filthy miscreants stinking the place up, it's not long before players are thrust into the arena-based life-or-death battles that comprise the gameplay. The Golem starts out with basic attacks and skills and will earn more through combat, but knowing the core mechanics of how to move, block and dodge is key to staying alive once the blows start raining down.

Enemies range from run-of-the-mill sword and shield-bearing imps, to larger monstrosities decked out with massive hammers flying around the place. They all have their own com bat routines, and even the weakest enemy in the game knows how to block and evade basic player attacks. Several of these nasties can rush the player at once, so switching the lock-on between targets and keeping enemies from getting behind the Golem becomes a necessary skill – defense and positioning is every bit as important as popping their skulls open with combos.

Combat has a reasonably weighty feel to it, and the most powerful moves in the player's arsenal are limited by various factors – dashing, for example, impacts a pressure gauge which must be refilled before the ability to run becomes available again. More lethal attacks require the use of mana, which can be quickly charged up from a standard blocking stance. It's worth taking the time to do so, as having these abilities ready and waiting to unleash at the right moment can easily turn the tide of a battle.

It all sounds fine so far, but one of the problems with Strength of the Sword is that design elements often clash badly against the gameplay.

For example, it employs the cinematic effect of slowing down time to artistically linger on certain attacks, but also applies them to the player's recovery animations – and when I say it slows down, it slows right down. The Golem slowly spins through the air in metallic agony as irritating, patronizing advice text lingers on screen. These repetitive tooltip pauses completely murder the pacing of fights, and there's no option to turn them off.

What's more, despite Strength of the Sword 3's aspirations towards providing an intense challenge, it's not really as difficult as it claims to be. Most of my deaths came from forgetting the controls at inopportune moments due to my own overfamiliarity with other action games.

The basic strategy of spamming powerful moves, moving out of range to recharge when needed, and then re-spamming worked wonders, and largely negated the need to master the combat system. As more items became available through killing enemies, the less skill became necessary to survive. As soon as I'd unlocked a giant drill to replace my sword, killing enemies in seconds became commonplace.

Even worse is that abusing these items and weapons – from explosives and throwing knives to health and mana boosts – doesn't impact the scoring system at all. I came in fourth on the leaderboards whilst reattempting an earlier boss simply by spamming the weapons I'd unlocked whilst progressing through the main game. Skill had very little to do with my vastly improved numbers, and put a sizeable dent in my desire to improve upon it.

Strength of the Sword

falls short of what it could have been, though it does come close (at times) to achieving its lofty goals. Tighter controls, a balanced approach to item use and a more restrained use of cinematic effects would go a long way towards getting it where it needs to be. It's just not quite there yet. Rating: 5 out of 10

Disclosures: This game was obtained via publisher and reviewed on the PS3. Approximately 4 hours of play was devoted to single-player modes (completed 1 times) and 0 hours of play in multiplayer modes.

Parents: According to the ESRB, this game contains fantasy violence and mild language. There's nothing in here that's unsuitable for kids other than the core difficulty of the game. If they can handle that, they're golden.

Deaf & Hard of Hearing: No problems to report. There's no voice acting to speak of, and the story is conveyed in a purely visual manner. Most of the onscreen action can be understood easily without the use of audio.