Is it safe to hit the streets yet? 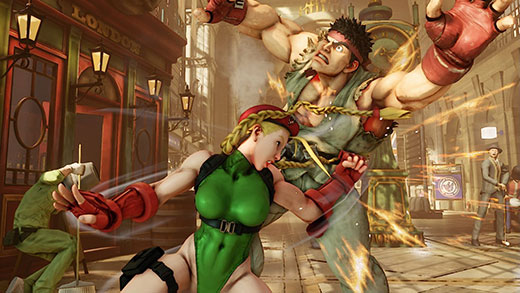 HIGH Rainbow Mika is amazing. No doubt about it.

LOW Several months on, and online matches are still taking too long to hook up.

WTF So many online Ryus. So. Many.

February's Street Fighter V launch introduced the game in an unquestionably busted state that was darkly fascinating to behold. Several shaky beta tests failed to adequately prepare it for prime time, and upon release, fans were greeted with no single player arcade mode, online lobbies which repeatedly failed to connect, an always-online requirement for anything resembling progress which would cheerfully disconnect every ten minutes or so, and a network infrastructure which seemed to be held together with nothing more than duct tape and the fervent prayers of Capcom. Needless to say, fans were overjoyed.

Sorry, did I say 'overjoyed'? What I meant to say was 'murderously incensed'—and who can blame them? Street Fighter V, so full of promise and potential, immediately squandered tons of goodwill by releasing in a state which was obviously unfinished.

It's a tear-jerking tale, especially given that the core gameplay is bloody good. More fluid than Street Fighter IV and blessed with an infinitely superior launch roster (the lack of Crimson Viper aside) all players could do was wait for the fabled March update to provide substance to the package and fix all the problems in one fell swoop.

Training modes! Network fixes! Alex from Third Strike as the first additional character! A shop to spend all that fight money in! It was to be the magical elixir to fix all of Street Fighter V's myriad woes, right? Right?

Ah, no. Sadly, even with the March update installed, it's still a fair ways off from being the complete package players were expecting to sink their teeth into.

Eight player lobbies have been added, but connecting can still be a bit of a dice roll. Training modes are now present, but they're nothing more than non-interactive tutorials and the same old combo challenges that have been around for ages and ages. The shop's goods are expensive with few things of note to choose from, and crucially, it's still taking several minutes to connect to online matches most of the time, whether sitting at a ranking menu or having autosearch do its thing in the background. Oh, and players earn no fight money from battle lobbies, and don't have access to a character select screen when playing casual or ranked.

So, that's the current state of affairs for anyone who's been following this farce from the beginning, and it's an even bigger shame since, as mentioned previously, the quality of the fighting is damned enjoyable.

As far as characters go, Rainbow Mika's probably the best time I've ever had using a Street Fighter character, easily kicking her previous Alpha 3 incarnation into a cocked hat. She's utterly insane as she Irish Whips characters around the screen and smacks them into the air, only to bomb them back into the ground like a maniac. It's also great to see Karin back, even if her transition didn't go quite as well for her. She's missing a lot of the things that made her initially stand out, including her battle stance. The newcomers are all decent additions with great designs… FANG aside, of course. I'm sure there's a fanbase, but he can sod off as far as I'm concerned.

As for the recently-added Alex, my main from Third Strike… well, I can only hope that the rest of the upcoming additions are more interesting. Like Karin, he's been tweaked in a way that makes him less enjoyable to use. He's slow, his stomp neither reaches full screen nor has badass tracking like its EX version, his Stun Gun Headbutt's no longer a super, most of his moves have low priority even when they reach active frames… it's unfortunate, really. He's not completely useless and has some nice combo potential under his belt, but bringing that potential to fruition seems pretty difficult.

On their own these tweaks might not be a big problem, but Alex is indicative of a larger issue. What Capcom has done—again—is make some of the boring series staples more useful than the slightly gimmicky side characters without putting a ton of work into them, and this skewed character balance cuts into the variety of opponents encountered online. At one point I fought nine Ryu matches in a row and almost died of boredom before shutting the game down. I've never wished for a character filter so hard in my life, even if only for casual matches.

There's a lot to love in Street Fighter V, especially Rainbow Mika, but the fact is that the game still isn't where it needs to be yet. The March update helped, but it was just a band aid on some pretty deep lacerations. Serious fighting game fans can hop in now without too many problems, but more casual players might want to wait—more fixes and a real story mode are still coming. Rating: 7.0 out of 10

Parents: According to the ESRB, this game contains: mild language, suggestive themes and violence. Sure, it's a game primarily about punching other people in the head, but a lot of older kids should be fine with it as long as they're not too impressionable. Oh, and as the ESRB warns there's a ton of cleavage and buttocks on display, which is awes… potentially troubling and borderline evil.

Deaf & Hard of Hearing: Subtitles are available where needed (occasionally not matching what's actually said, such as during Alex's fight intro), and lack of sound isn't going to impede the ability to play much.