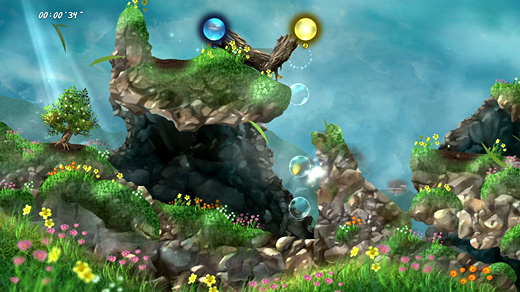 LOW When the physics don't work as advertised, leading to multiple stage retries.

In Storm, players are a floating spirit with the power to call down rainstorms, smite the ground with blasts of lightning, create gales of wind and harness the power of tornadoes—all to ensure that a seed from a tree can make its way to fresh soil and put down roots.

That's not to say this relentless propagation of trees will be an easy task, though.

Seeds are fragile things and the environment can be difficult for them to navigate, even with a gentle breeze sending them scooting towards their goal. Areas can also be dangerous to the unprepared seedlings with fires, poison and pitfalls proving particularly hazardous—though if one seed unfortunately perishes, another immediately takes its place.

(I assume the trees will eventually clone themselves, growing in number until they're able to overthrow mankind as the dominant species and start their own technologically advanced tree civilization. Possibly. I'm inferring a lot, here.)

However, the game's slightly unwieldy physics engine can prove problematic. On easier stages things going awry is irksome, but the harder it gets, the more frustrating it proves as our courageous little seeds are forced to navigate ever more complex death traps to reach their goal.

To be fair, it's quite pleasing to see a seedling progress smoothly from point to point, having worked out the correct path. Rolling one across a verdant plane, striking it with lightning so that it hops across poisonous soil and small pitfalls, and then causing a rainstorm so that it'll float where it has to go… it's good stuff when it works. That said, when things go belly up it can be disheartening, and the cooldown timers on each power often take too long to allow players to snatch victory from the jaws of defeat.

For example, near the end of one "summer" stage, a log resting atop another log would provide the perfect natural barrier to prevent my seed from rolling back down a hill—all I'd need was to blow up one of them with lightning once the seed was safely past, and the other log would fall gently into place behind it. Great! But, things worked out in an unexpected way—as the log hit the ground, it suddenly bounced twenty feet into the air and blocked the goal permanently.  Another example had me flooding an area ten times in the same spot before a seed finally shook loose and spurted up onto a ledge the way it was supposed to.

Even more bizarrely, there were multiple puzzles where I'm sure I bypassed the actual problem completely through successfully attempting to navigate a presumably unintended route. It isn't that the physics are completely busted here, but Storm's quibbles can easily lead to awkward or sometimes stage-ending behavior, which is not a desirable trait for many puzzlers.

At its best, Storm is a curiously relaxing, tranquil, and almost meditative experience. At its worst, it's an irritating and cumbersome exercise in physics-based frustration which only gets less enjoyable as the puzzles ramp up in difficulty. It may have a fresh, vibrant aesthetic, but the actual gameplay doesn't match up to the potential it clearly has. Rating: 5.5 out of 10.


Disclosures: This game was obtained via publisher and reviewed on the Xbox 360. Approximately six hours of play were devoted to the single-player mode, and the game was completed. There are no multiplayer modes.

Parents: According to the ESRB, this game contains nothing at all. Their consumer information page is curiously empty—though quite what anyone could get upset about in this game is beyond me. Maybe if someone really, really hates trees they should clench their jaws and turn away, but aside from that…

Deaf & Hard of Hearing: Nothing of note here, all information can be gleaned through the visuals on screen.