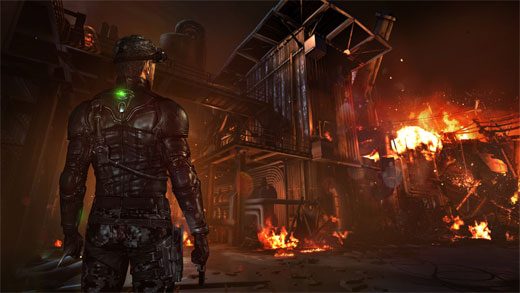 HIGH Ghosting through a battleground of enemies shooting at where they think Sam might be hiding – and never once realising their mistake until it's too late.

WTF Andre Kobin goes from being an intensely detestable two-bit thug to the coolest character in the series? How did that happen?

Sam Fisher's a curious hero, if for no other reason that he seems to be aging in reverse. In the first Splinter Cell game he shuffled around like he was suffering from a slipped disc, and now he's shimmying along window ledges at the speed of light and hauling unwary guards to their doom without strain.

, and caused ripples of alarm to spread through the fanbase as they feared that the series' stealth roots might be disappearing for good, trading in some of the finest espionage to be found for watered-down skulking and an increasing reliance on sub-par gunplay. The future was looking bleak for the series, which is why it's a pleasant surprise that Blacklist has turned out to be such a successful fusion of both stealth and action in a way that Conviction only hinted at.

The storyline's nothing special, to be fair. In typical Tom Clancy fashion, there's a bunch of terrorists threatening to pull down America's pants in front of the world and give them a metaphorical wedgie that involves killing millions of its citizens. Only Sam Fisher, a team of handpicked agents and his top secret instantly-upgradable flying plane can put things right before it goes wrong. How does he do it? He puts his enemies in the ground, of course.

While out on missions, areas tend to feel vastly more organic than they did in Conviction, lending themselves to a more interesting variety of potential approaches. It's still possible to pull out a shotgun and blast every enemy in sight, but snaking under a ledge and ghosting past guards can be an immensely more satisfying approach.

Many of Sam's gadgets have also returned, so distracting enemies with sticky cameras and then gassing them when they come to investigate can make things easier for sneaky players. It goes without saying that Sam's trademark night vision and sonar-powered goggles return, so staying one step ahead of enemies is often as simple as getting to a vantage point and spotting them before they have a clue that Sam's even in the area.

However, enemy patrols have been upgraded in several ways. Grunts are still easily felled and ridiculously thick, but enemy groups can have heavies dotted in amongst them – highly armored targets that have to be knocked out from behind, take a ton more bullets to put down, and wear helmets with respirators that make headshots and gas attacks useless until damaged or removed. Dogs can sniff Sam out from miles away, and Voron operatives have their own night vision goggles. No individual enemy is hellishly difficult, but the variety and combinations spice up encounters.

One of Blacklist's most impressive features is just how much content is included in the game.

Aside from the reasonably-lengthy and well-crafted campaign, there are multiple story-driven co-op sections, a badly designed horde mode, and all the bits and bobs associated with upgrading Sam's flying base of operations. Cash is earned throughout to spend on equipment, gadgets and amenities, and there are often bonus objectives like extracting high-value targets or hunting down Blacklist laptops to juice up the group's funding.

The excellent Spies vs Mercs mode returns as well, though there are some questionable changes to it this time. It's tough to imagine why Ubisoft felt that spies gutting mercs at close range from the front was a good idea, for example. However, it still delivers what can be an enjoyably tense experience as spies skulk in the shadows as their heavily-armed opponents scour the area for them.

With Conviction, the Splinter Cell series seemed to be veering off course, but Blacklist

thankfully grabs the wheel and gets it back on track. It may not hit the heights that Chaos Theory did years ago, but it's an enjoyable romp that leaves me optimistic about what the future holds for Sam Fisher's next outing, even if Sam's ten years old and has to jump three times his own height to stab foes in the neck thanks to that reverse-aging thing. Rating: 8 out of 10


Disclosures: This game was obtained via retail store and reviewed on the PC. Approximately 15 hours of play was devoted to single-player modes (completed 1 times) and 3 hours of play in multiplayer modes.

Parents: According to the ESRB, this game contains blood and gore, drug reference, intense violence and strong language. I was about to say it's not really all that bad, and it isn't for the most part, but then I remembered some dude getting his fingers slowly hacked off during an interrogation. Hrmm.

Deaf & Hard of Hearing: The usual audio clues are important for locating enemy positions before being spotted – there's a lot of visual information to help out however, and subtitles are readily available.

Thanks for the comments guys, glad you enjoyed the game too. It’s nice to see the series hit a high again – while I didn’t hate Double Agent or Conviction, I haven’t really enjoyed a Splinter Cell as much as Blacklist since Chaos Theory. It’s kind of understandable that Blacklist didn’t do gangbusters in the sales charts – Conviction did leave a lot of people cold, and at least over here in the UK there was little fanfare leading up to its release – but it turned out to be a high quality game with way more content in it… Read more »

Elias Toufexis really brought his A-game as Kobin. The scene where Sam rescues him was a highlight of the gaming year.

I thought the game was fantastic, and I haven’t even finished it, I got swamped under other games, but it’s a crying shame it wasn’t a bigger deal.

I was enjoying Blacklist until they force you to play certain styles for certain parts. I really hated the Nouri mission last part section after you confront him. I was playing stealth the whole time and didn’t have the right equipment to do the rest of the mission. It was a pain. I got very frustrated aswell with Nouri, why can’t he have held back a bit. The game promises you the choice of 3 play styles or mixing them up, but you have to have the right equipment to get through certain parts, which I didn’t have. Please make… Read more »