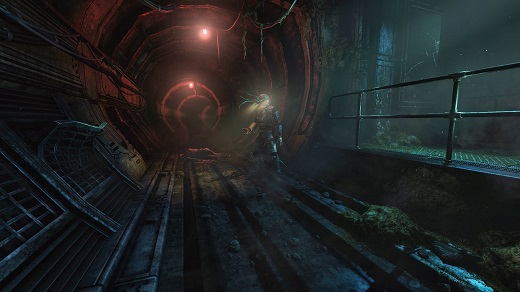 HIGH Going for a little stroll on the sea bed during a deep-ocean storm.

LOW The monsters seem like they intrude upon, rather than compliment the core experience.

For one, he's been in a car accident that's left him saddled with potentially fatal brain damage. He's also been undergoing experimental treatment for said injury, and during one session he's thrown into a nightmarish hellhole known as Pathos-II. It's a partially-destroyed undersea complex full of biomechanical corruption, corpses, and robots shuffling around thinking that they are, in fact, entirely human.

It's a lot to have on his plate.

With a setup like this, it would be venturing into spoiler territory to reveal much more, and the sense of discovery and exploration is one of SOMA's greatest strengths. While the reveals aren't always mindblowingly unexpected, it does a great job of selling its decaying world to the player, supporting its narrative through the unearthing of clues and audio logs that fill in the blanks between Simon going for a brain scan and Simon fleeing for his life.

SOMA is also a game that attempts to get its audience thinking about, uh, really complicated things and stuff. It really wants the player to get all philosophical. What does it mean to be human, for example? Do we really have souls, and is our consciousness the only evidence of our individuality? And if a tree falls in a forest and nobody's around, did David Cameron really do that to a pig? The answer to all these questions is, of course, 'probably', but SOMA falters a bit in the execution.

For example, several of the puzzles deliberately try to make the player feel like a scumbag for successfully completing them, but it doesn't work since there's no real choice involved. If something ‘horrible' has to be done in order to continue the story, I'll do it without a second thought. Such an event is required to occur by the developers, so any potential guilt or emotional consequences slide clean off my back as a result.

Another stutter is that SOMA never finds the balance it should between Survival Horror and allowing players to absorb the narrative. It attempts so much with the story and its portrayal of the ruined world that I started wishing the evil sods stalking around would just bugger off and let me soak up the environments in peace.

I'm not very convinced by these enemies, either. Unlike Frictional's other work, Amnesia: The Dark Descent, these monsters don't feel like they're out to hunt down and chew up interlopers. It's more that they're just horrible grumps who don't like being interrupted. Often they're found simply wandering back and forth in front of mission-critical levers or doorways until Simon walks into range, chucks a screwdriver into an empty corner as a distraction, or activates a pneumatic doorway for the creature to charge off and investigate.

Even worse, they're a bit random. At one point Simon was skulking behind a table to avoid danger, hidden completely in the shadows. An unearthly roar suddenly echoed off the walls, and it turned out that one of the monsters had gone psychic, charged across the room to said hiding spot and lamped Simon in the face. Not so much scary, as irritating.

As far as the graphics, sound and general environment design go, they're accomplished. In a game that's all about presenting a believable and well-constructed atmosphere, these are major concerns, and Frictional does a good job of presenting the decaying underwater world to players. The framerate hitches here and there, and pausing to save when entering new areas does affect immersion, but on the whole the art and sound work extremely well, whether it's a pressure valve suddenly springing a leak or a monster shrieking into the void.

While SOMA never hits the highs of Amnesia: The Dark Descent, it's still largely decent in its own right. Some confused environment design and lackluster monster scenarios work against it, but as an atmospheric jaunt under the sea with a reasonable storyline behind it… well, it works pretty well. Faint praise perhaps, but praise nonetheless. Rating: 6.5 out of 10


Disclosures: This game was obtained via publisher and reviewed on the PS4. Approximately 10 hours of play was devoted to single-player modes (completed 1 times) and there are no multiplayer modes.

Parents: According to the ESRB, this game contains violence, blood, nudity and strong language. I actually don't remember any nudity throughout, but the other stuff is pretty obvious and frequent.

Deaf & Hard of Hearing: There are subtitles available, but a lot of the ambient noise can be pretty important when it comes to sensing and fleeing from danger.