A Kula In Angel’s Clothing 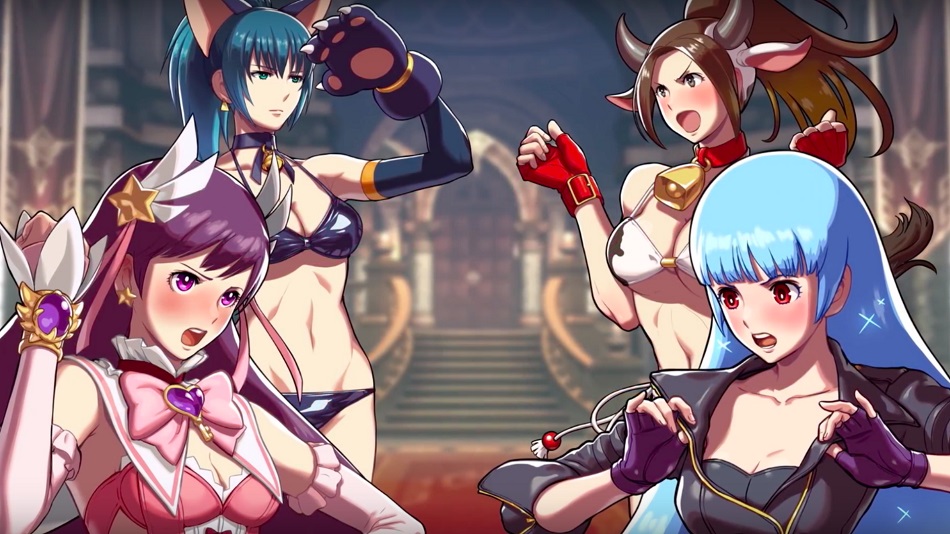 SNK Heroines: Tag Team Frenzy is a self-described party game which takes a number of SNK’s female fighters and dumps them in a fighting tournament held by the dastardly Kukri — a shameless, sand-shifting pervert who first cropped up in King of Fighters XIV. He initially seemed like a normal addition to the roster of that game, but it turns out that he’s actually a colossal sexual deviant instead! Who woulda thunk it?

The vast majority of the roster comes from the King of Fighters series, and personally, I wouldn’t exactly call it an all-star lineup. Classic characters like Mature, Blue Mary, Vanessa and Angel are nowhere to be seen, replaced by fighters featuring a more ‘moe’ emphasis for the cast.  I mean, Sylvie Paula Paula’s here instead of King, Charlotte, Eri or Shiki? Eh, okay, I guess. Luong’s in there, which is great, but with only 14 character slots in the initial lineup, it’s unlikely players will be content with the selection on offer.

The combat in SNK Heroines is simplistic. Excessively so, in fact. There’s a button for auto combos, a stronger attack button for single, more powerful hits, a special move button which eats up the character’s special gauge (but hurls out assorted special attacks when combined with a direction) and one dedicated to throwing the opponent. There’s also a tag button to swap in and out with the support character, a block button that doubles for triggering evasion moves, and a super move button called the Dream Finish. Oh, and there are items strewn about the field that support characters can collect and flick onto the arena using the right analog stick — everything from bombs to healing items. 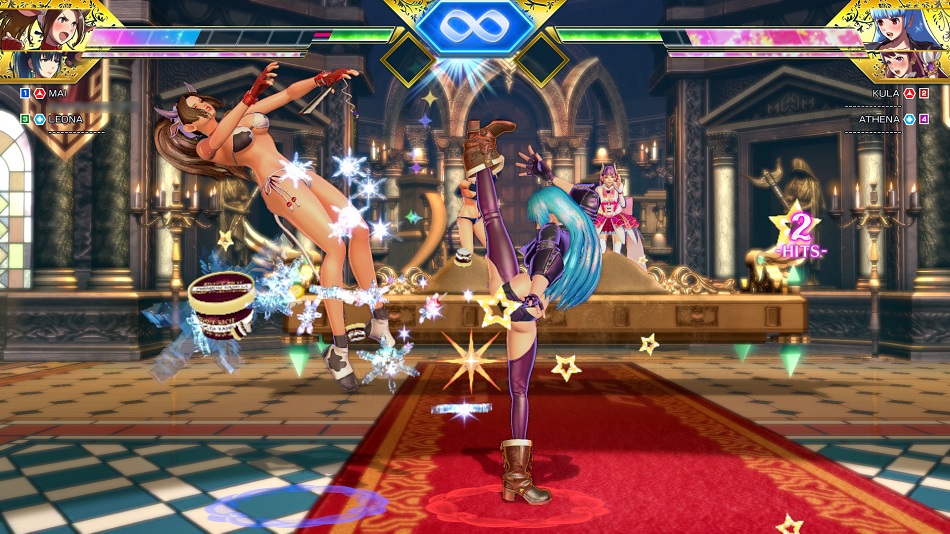 Written down like that, it doesn’t sound so bad. However, there are some obvious tactical omissions from the fighting game genre — for example, characters are completely unable to crouch. This immediately removes the need for overheads, and hugely impacts the ability to psych the opponent out with footsie tactics. Most matches I played boiled down to fishing for the auto combo, then repeating simple stock combos until the opponent’s health dropped to a point where they could be killed off with a Dream Finish attack.

Speaking of which, this is probably the one interesting twist that SNK Heroines brings to the table — normal moves are unable to knock out an opponent, so the victor has to build up enough energy to land a final super attack. That said, these finishers are almost always available and can usually be landed mid-combo, so they’re not a particularly punishing addition to the mix. What’s even stranger is that once one lands, the fight is over – it demolishes both characters on the opposing team and there’s only one round per game, so matches fly by at a ferocious pace.

As a result of these simplifying changes, it’s definitely not a patch on King of Fighters proper, or even many other fighters on the market. Fighting has been streamlined to the point where taking on the CPU is almost mindless, and the dearth of available modes to participate in rams home just how shallow the entire experience is. However, playing online is a far more enjoyable approach. It can take a while to find a game, but at least there’s a sense of urgency and improvisational tactics, although the similarity of the characters and the lack of viable approaches means that even this mode wears thin after a few hours with little variation between the majority of matches. 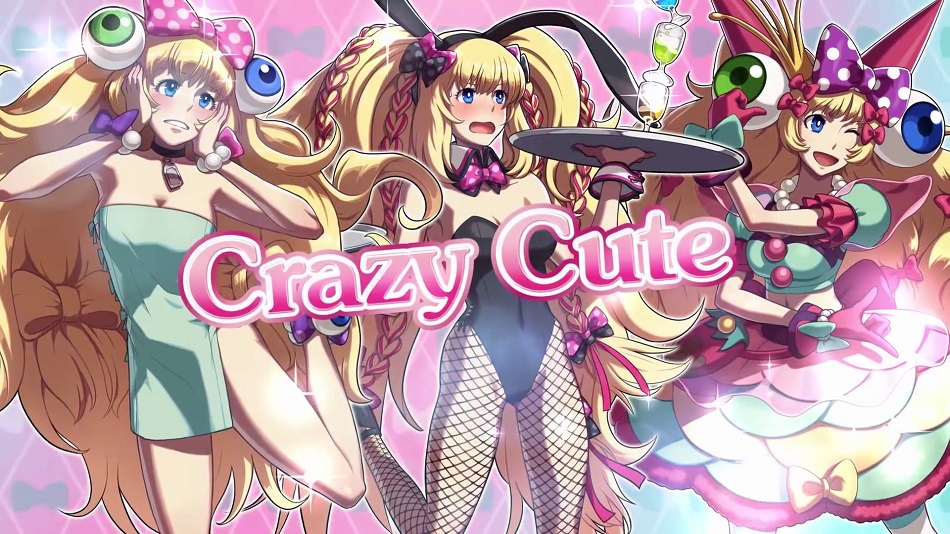 One potential selling point of SNK Heroines: Tag Team Frenzy is the amount of character customization. There’s a fully featured photo mode with a bunch of accessories and costumes to buy for the cast alongside a bunch of layers and backgrounds to have them pose against. It’s not much of a distraction, but it’s there for anyone who wants to spend time putting shackles on Love Heart and then pressing her up against the back window of Geese Howard’s car.

Weirdly, my favorite thing about the whole thing was probably the ending sequences.  Leona Heidern and Yuri Sakazaki have legitimately cool endings — one in which a chibi Leona goes full Orochi with a toy hammer in the cutest massacre in gaming history, and the other features Yuri rewriting history by becoming the main protagonist in the first Art of Fighting. These endings certainly aren’t enough to recommend a purchase on their own, but I gotta admit that I genuinely burst out laughing during Leona’s one.

SNK Heroines: Tag Team Frenzy is a tough sell. Dedicated King of Fighters fans and SNK enthusiasts like myself will find the battle system too simple and limiting, and the roster is missing too many of SNK’s finest female characters. Also, anyone hoping to perform a five finger knuckle shuffle while seeing Leona cosplaying as Heidern or a female Terry Bogard will be stymied by the poor graphics and inferior character models.

So who’s left in the potential audience? People who’re hankering for a simplistic fighting experience that only provides enjoyment in small doses when played against a real opponent. Those folks will have to get in on this quick though — these types of games rarely retain an online player base for any length of time, especially niche ones like SNK Heroines.  It’s not necessarily a bad concept overall, but simply lacking in its execution. Rating: 4.5 out of 10

Disclosures: This game is developed by SNK Corporation and published by NIS America. It is currently available on PS4 and Nintendo Switch. This copy of the game was obtained via publisher and reviewed on the PS4 Pro. Approximately 6 hours of play were devoted to the single-player mode, and the game was completed with every character. 3 hours of play were spent in multiplayer modes.

Parents: According to the ESRB, this game is rated TEEN and contains Language, Suggestive Themes and Violence. Mild perversion aside, there’s nothing overly troubling about what’s on show here. It’s bloodless, presented in a glitzy format and only very occasionally features cartoonish S&M dungeons as a photography prop.

Deaf & Hard of Hearing Gamers: There shouldn’t be any problems here, the gameplay rarely if ever relies on audio cues that don’t also feature an onscreen visual accompaniment. Subtitles are a little on the small side and can’t be resized. 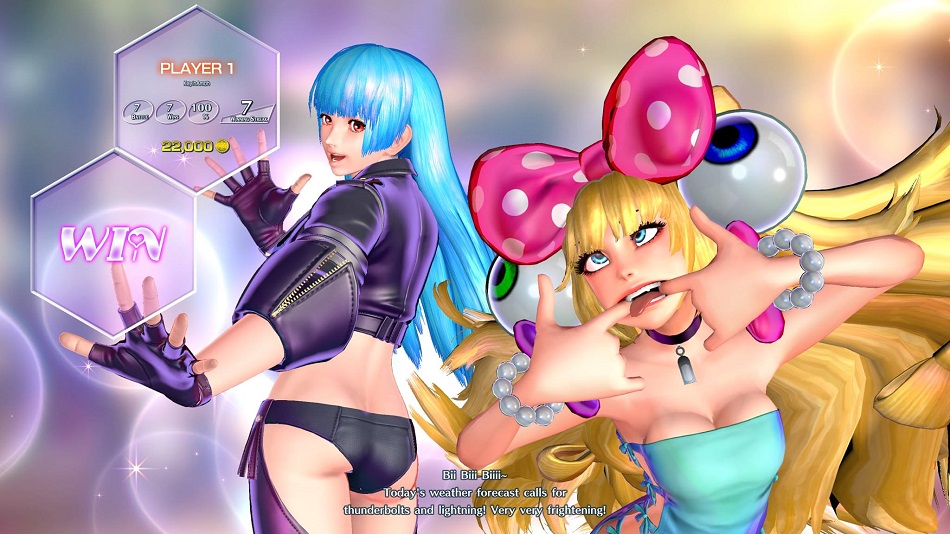 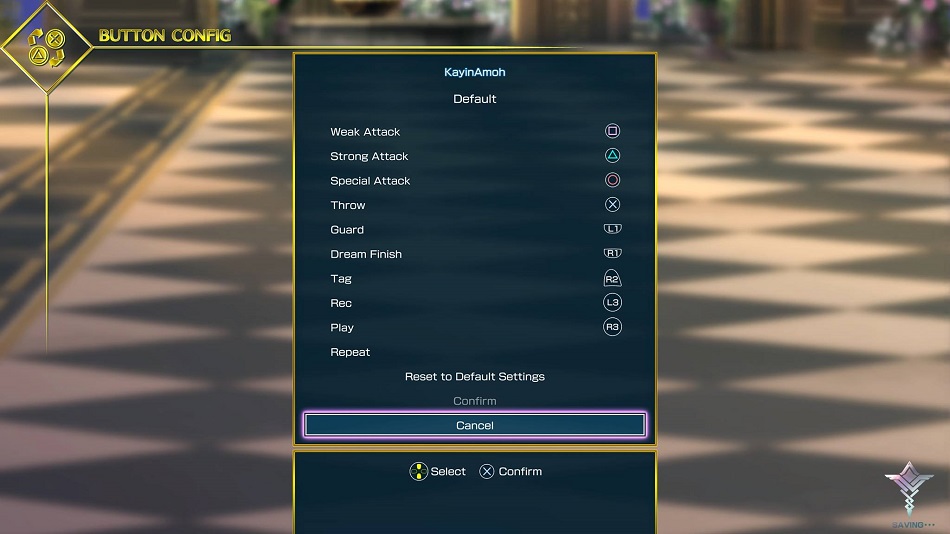