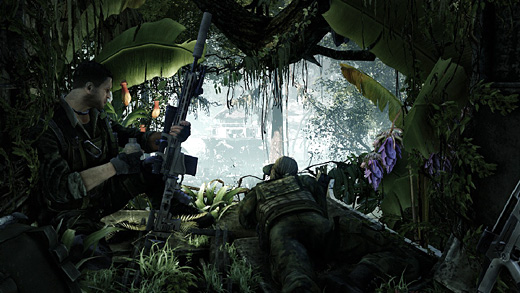 LOW Feeling like little more than a dancing puppet throughout the game.

WTF Spotters are undoubtedly the real heroes, not snipers.

Pulling off tricky shots with a sniper rifle can be one of the greatest feelings that a first-person shooter has to offer, whether nailing an enemy Elite in Halo from halfway across the battlefield, or silently taking out an entire enemy encampment in Far Cry 3. Such satisfaction makes it all the more confusing as to why so few developers who specialize in the art of long-distance murder are able to produce a product that expands on these moments and transforms them into a satisfying full-length game.

is one of these failures, for example. It's a mediocre five hour romp through ten different stages set against a completely forgettable military-themed backdrop with the goal of retrieving a bioagent that apparently "makes the Black Death look like a head cold." Given that the bioagent in question is never unleashed, it might as well be about a magical banana that shoots businessmen at the sun.

Sniper doesn't hold the player's hand; it shackles them in chains and beats them mercilessly around the head and shoulders if they so much as cough without permission.

AI spotters (primarily an omnipotent superspotter named Diaz) will do all the hard work and make all the decisions. If he says to hide in some bushes, not hiding in some bushes will incur the wrath of God from nearby enemy forces. Want to go left instead of right? That'll be a game over most likely, or at least a couple of bullets in the thigh. There's little leeway to formulate a plan that doesn't coincide with what the game expects of players—going too far off the beaten track will simply have the screen dim and flash a warning message to get back inside the mission area before a timer expires.

Outside of the hardest difficulty, everything is set up in such a way that sniping over vast distances is the easiest thing in the world. AI teammates tell the player exactly who to kill, when to kill them, and even note their location with convenient HUD markers for easy target acquisition. Rest the sights on them for a moment or two and a secondary red dot will begin to glow, indicating where the bullet will land after bullet drop, wind interference and other mathematical macguffins work their digital magic. Then it's time to still some breathing and… pop! Dead enemy. 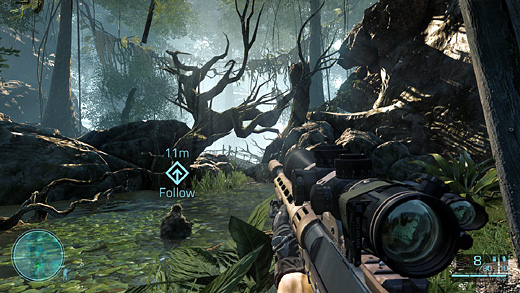 Sniper: Ghost Warrior 2 features the kind of AI where a missed shot pinging into a rock at a goodly distance can immediately give away the player's position, but the enemy will routinely fail to hear their comrade's freshly squeezed corpse slumping into a wall right beside them, or even the sharp crack of the player's unsilenced rifle from relatively close range.

It has to be said that kills are also lacking the graphic payoff that rival sniping game Sniper Elite V2 offers up. In that game, shooting someone in the eyeball didn't simply have the enemy go limp and fall over, it was more likely that players would be treated to a hilariously overdone slow motion X-Ray closeup as the projectile burrowed through his eyeball, spiraled slowly through his brain (spattering chunks of gray matter all over the place) and then triumphantly emerging from the back of his cranium with a solid chunk of his head missing. Written down, it sounds thoroughly disgusting. In practice, it was a comically overdone, yet ultimately satisfying payoff to a shot well targeted.

In Sniper: Ghost Warrior 2? Everyone simply falls over.

Occasionally a kill-cam will leap into action to portray a bullet's magnificent journey into someone else's nutsack, but it always ends up with the bad man simply grunting before promptly falling over.

Not to worry though. If a heavily-scripted four or five hour campaign with dreary fatalities doesn't get one's saliva all a-drooling, why not hop into the multiplayer mode for the intoxicating adrenaline rush of competing against unpredictable human opponents? Filled to bursting with two whole multiplayer maps and offering the ever-popular Team Deathmatch, it's… sorry, I can't take this any further. It's not awful, but for most people the multiplayer will likely prove to be a waste spent watching the scenery for minutes at a time as they attempt to discern miniscule flickerings of movement through their scope.

It probably reads like I despised Sniper: Ghost Warrior 2, though that's not entirely accurate. It was no more boring than certain competing AAA titles that are so petrified of things going wrong that they never allow the player to experiment further than holding "up" during a cut-scene where the entire world is exploding around them. It was simply another bland experience where I found myself listening to someone telling me what to do, who to shoot and when. Rinse and repeat until the world is saved.

does a mediocre job of offering up a shooting gallery, but it's so limited in scope that it's almost impossible to recommend to anyone who doesn't feel a strange sense of arousal whenever they imagine popping a bullet into someone's head at several hundred yards. Well, whenever Diaz finally tells them to, of course. Rating: 4.0 out of 10.


Disclosures: This game was obtained via rental and reviewed on the Xbox 360. Approximately six hours of play were devoted to the single-player mode, and the game was completed. One hour of play were spent in multiplayer modes.

Deaf & Hard of Hearing: There are quite a few moments where the inability to hear certain audio cues or background noise would be disadvantageous, despite subtitles being available for conversations and the like. Be prepared for a more challenging experience.